Turkish Military will soon use armed, domestic drones in fight against terrorism 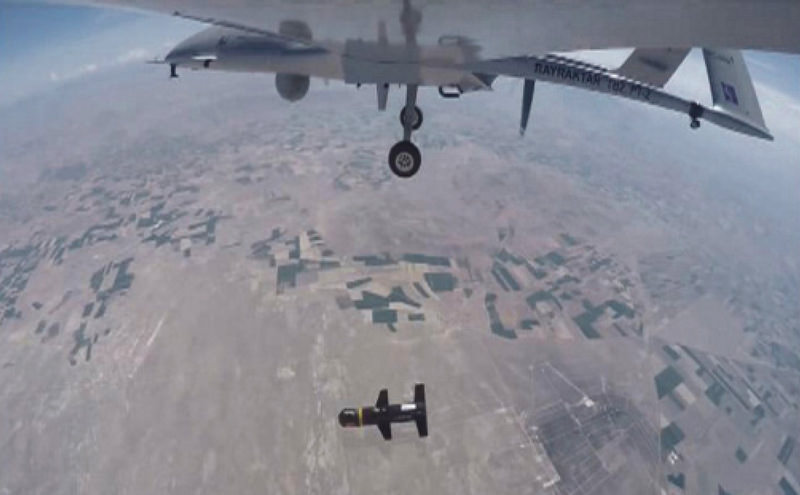 Turkish engineered and produced armed drones are readying to hit the market for use by security forces, particularly against terror, after having successfully passed all trials and tests. The commander of the Turkish Armed Forces, Gen. Hulusi Akar, said the domestic armed drones will be mass-produced for use in the near future in order to enhance Turkey's strength in the fight against terrorism. Last week, at the meeting of the Council of Ministers held in Beştepe, Ankara, under the leadership of President Recep Tayyip Erdoğan, the fight against terrorism as well as ongoing projects such as domestic drones and helicopters were among the most important topics discussed. Akar shared information with the Council of Ministers regarding an estimated timeline for completing the projects, and how to increase the strength of the Turkish Armed Forces. Accordingly, the armed drones have been produced by two Turkish firms. Although Akar did not mention the names of the two firms, Bayraktar and another Turkey-based firm are expected to take on the production of armed domestic drones. Akar said the testing of the armed drones were a success, adding that armed drones will soon be introduced after the completion of vision and maneuverability tests. Akar added that as soon as all the tests are completed, the mass production of armed drones will commence and will be systematically included in the military. Akar stressed that domestic armed drones have the ability to operate at high efficiency and even in bad weather conditions, claiming that these drones are better than those produced by the United States. Moreover, Akar briefed the council on the ongoing works of the Turkish attack helicopter, the T129, as well as the Fırtına (Storm) tanks.

In April, the Turkish-engineered tactical unmanned aerial vehicle (UAV) "Bayraktar," manufactured in collaboration with Kale-Baykar, shot an MAM-L smart ammunition projectile armed with a warhead for the first time during a test. The ammunition, fired from the UAV on a shooting range near Konya, was developed by ROKETSAN and managed a direct hit to its target. The Bayraktar was fired during a test for the first time last December but without a warhead attached. The writing on its munitions, "Beni at, onu atma" (Fire me, not it) and "Atcem deyon atmeyon" (You say you'll fire, but you won't) drew appreciative laughter from those in attendance.

After the tests, Defense Industries Undersecretary İsmail Demir shared the images on his Twitter account saying: "We cannot be proud enough; our all-national UAV hit the bull's-eye with tears in our eyes. How far we have come!" Following these tests for the armed drone, the "qualification" stage has been completed. Furthermore, over the next months, Bayraktar drones are intended to be used by the Turkish Armed Forces after the completion of all required additional tests.

In ongoing tests, the drones are expected to carry additional ammunition. Each round of ammunition, the MAM-L and MAM-C, developed by Roketsan for the drone platforms, weighs 22.5 kilograms. The guided ammo with the warhead, weighing 10 kilograms, can hit a target up to 8 kilometers away. In the wake of the DAESH missile attacks in Kilis in Turkey's south, Turkey ordered Predator armed drones from the U.S. Now, with the advancements made in the Bayraktar drones, they are expected to be used as an armed UAV platform in the region.