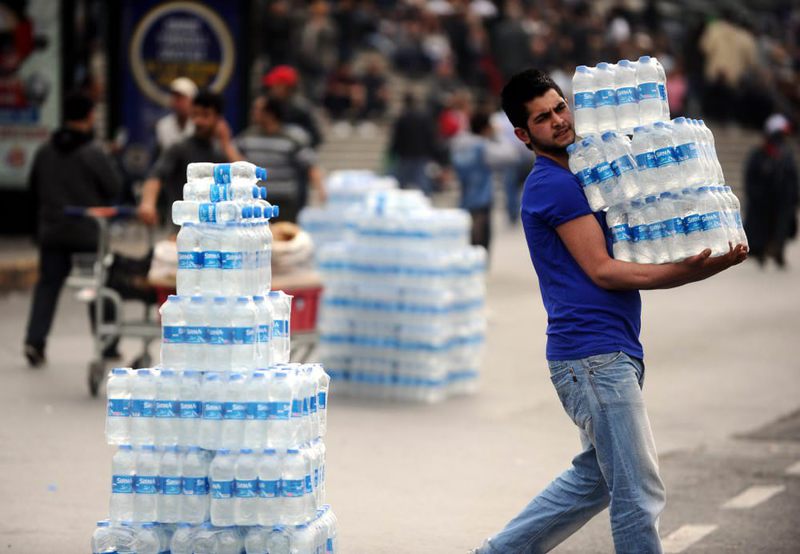 by Daily Sabah May 10, 2016 12:00 am
The water peddlers who stand along Istanbul's roads selling hundreds of bottles to motorists, especially during rush hour, are on the radar of the water firms that have recently entered the market and are seeking cheap marketing. The peddlers can earn as much TL 200 ($68.4) during rush hours, by selling bottles of water at TL 1.25 per bottle.

According to Yeni Şafak daily, bottled water producers are going after peddlers accustomed to Istanbul's traffic. Those who are able to sell hundreds of bottles, especially during rush hours, provide marketing and sales advantages for firms that are newly entering the market. While global revenue from bottled water is $12.3 billion, the market volume in Turkey is TL 4.3 billion and market turnover is TL 3 billion. Since per capita consumption of bottled water is 138 liters, rival companies are trying new methods, and direct marketing is an attractive method for companies that cannot afford to pay thousands of dollars for short TV commercials.

A report from Yeni Şafak says water companies are presenting special offers to peddlers, who respond to the supply/demand balance in the free market even faster than the Borsa Istanbul stock exchange. The peddlers see the benefit of just a few cents difference in a million-dollar market, when companies supply the bottles for 15 cents apiece, whereas they would normally purchase them for between 25 to 40 cents. While drivers are fed up with waiting in their cars for hours, the traffic just flows past the peddlers.

The peddlers sell bottles staggered 200 meters along metrobus lines, or at the Marmaray or Mahmutbey ticket offices in Istanbul. Earning 75 cents profit from bottles for which they charge TL 1.25, they earn as much as TL 200 during rush hours. Some earn TL 3,000 or TL 4,000 in a month. Of course, they also have side businesses selling things like simit, wafers and flowers.

Considering the minimum wage in Turkey is TL 1,300, making TL 3,000 per month seems not bad at all. However, the job is difficult and dangerous. Three years ago, a peddler named Hasan Kaya warned a reporter who was writing about peddlers, saying: "Do not write bad things about us, do not rile people against us, this is a tough business." Hasan Kaya passed away 20 days ago, hit by a metrobus while making his sale in traffic.

His story is similar to that of many others. A greengrocer in Sivas, Hasan Kaya came to Istanbul 16 years ago. Unable to find a job, Kaya started peddling when he could not provide a regular income for his wife and children. Selling water, simit and wafers means working without insurance, meaning without security for tomorrow.

Yeşim Kaya, Hasan Kaya's wife, is trying to make a living for her three children, one now attending university. Trying to pay for the education of her children with support from the municipality, Yeşim Kaya says her husband faced challenges finding work, as his education and age counted against him, and he was forced to work as a peddler for eight years. After a life spent running from police, he was injured and also paid fines.

Yıldıray K., a peddler on the Perpa Metrobus line, says that there is always a job for everyone in Mecidiyeköy. Stating that people in traffic sometimes buy water just out of boredom, Yıldıray K. says they sold over 300 bottles. Remembering Hasan Kaya, he says: "Whatever he went through, we are going through the same. We have no insurance, the city police are after you, [working] 10 hours a day, without complaining about the weather. But there is nothing to do. It is our bread and butter."

Ahmet Ali, another peddler, says the sales take place everywhere from the Yenibosna line to Acıbadem. Selling simits during rush hours, Ahmet Ali says: "If people are hungry, they eat that simit everywhere. It does not matter if it is luxury vehicle or a minibus. We even have special deliveries to the shuttle buses for some companies that buy 15 simit and bottles of water." He also says some company officials reduce prices by 15 cents to make sure their products are preferred, and the peddlers bargain reasoning similarly, offering the companies free advertisement.

Working around the Zincirlikuyu region, Mahmut T. says summer is good for business since they do not have to carry the bottles or cry out for sales, since the drivers will buy them during the rush hour.

Explaining that they earn over TL 3,000 a month in recent years, Mahmut T. says now everybody is selling including children and youth, all carrying two packages of bottles, who earn TL 35 if they sell 50 bottles in an hour. Business is more competitive. Saying they have to sell wafers, simits and flowers as well to survive, Mahmut T. says he doesn't recommend the job since not everyone makes TL 3,000 and the life is too hard.
RELATED TOPICS