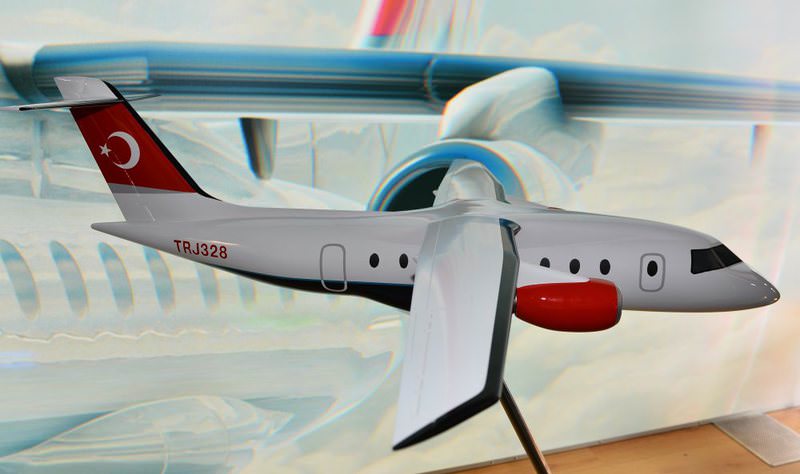 Turkey and Ukraine reached an official agreement for the joint manufacturing of passenger and cargo planes. The agreement also involves areas such as industry, technology, energy, agriculture and transport

Turkey has signed an agreement with Ukrainian aircraft manufacturing company Antonov on the joint production of passenger and cargo aircraft. The agreement came after Turkey initiated work on a domestic plane by obtaining the licenses of planes produced by German aircraft manufacturer Dornier. As a part of the work on the domestic plane, the Transportation, Maritime Affairs and Communications Ministry will simultaneously work on the TRJ328 and TAN-158 models. As such, talks between Turkey and Ukraine for a joint plane project have progressed in line with Daily Sabah's reporting one year ago.

The agreement was signed by Ukrainian Deputy Prime Minister Gennadiy Zubko and National Defense Minister İsmet Yılmaz, who traveled to Kiev to attend the 10th meeting of the Turkey-Ukraine Intergovernmental Trade and Economic Cooperation, according Yeni Şafak daily. According to the agreement, the two countries will engage in joint cooperation on aviation and space technologies.

Zubko said Turkey and Ukraine decided to jointly produce passenger and cargo planes at the Antonov facilities, adding: "I am sure our works will be fruitful. We have set a road map and we will work according to it."

Turkey will work to produce a TAN-158 model passenger plane based on Ukraine's An-158 model passenger plane on the one hand, and will develop and produce a cargo plane based on Ukraine's An-178 model cargo plane on the other. The agreement also encapsulates issues such as training nuclear power plant staff and enabling Turkish students to undergo a period of training in Ukraine.

Commenting on the agreement, Yılmaz said issues such as industry, technology, energy, agriculture, transport, tourism, the environment, urban planning, culture and tourism were also reflected in the agreement. "As a result of efforts made by a technical delegation, we have addressed bilateral economic and trade relations as a whole during the two-day 10th meeting of the Turkey-Ukraine Intergovernmental Trade and Economic Cooperation. We also addressed future projects," he added. Stressing that the issues cited in the agreement are a rough guide for bilateral economic and trade relations, Yılmaz said the technical delegation's negotiations and the following decisions are expected to lend a new impetus to Turkish-Ukrainian relations. Previously, Ukraine put Turkey's efforts on the domestic plane on its radar and offered to develop cooperation in this field with Ankara. Three years ago, then-prime minister and current President Recep Tayyip Erdoğan and then-Ukrainian President Viktor Yanukovych met in Ankara where Yanukovych personally introduced an Antonov-158 model plane. Both leaders examined the plane at Ankara's Esenboğa Airport.
RELATED TOPICS