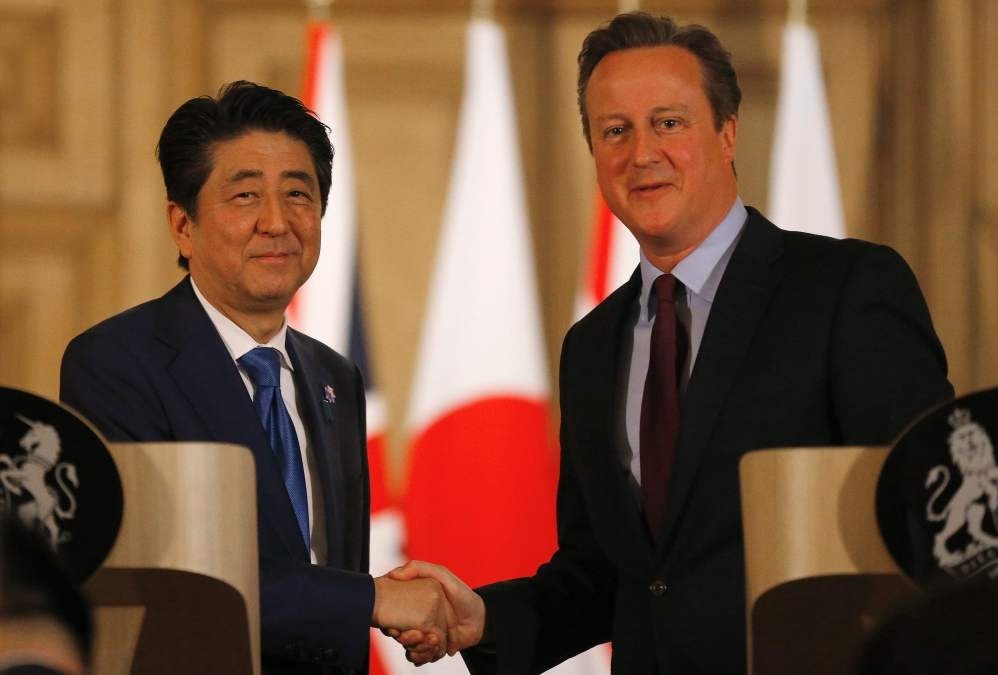 Japanese Prime Minister Shinzo Abe (L) and British Prime Minister David Cameron attend a joint press conference following a meeting in central London.
by May 19, 2016 12:00 am
Finance ministers and central bankers from the G7 meet in Japan this week for talks likely to highlight a sharp divide over currency policy and how to breathe life into the wheezing global economy.

The group - including U.S. Treasury Secretary Jacob Lew and European Central Bank President Mario Draghi - converge at a hot spring town north of Tokyo where two days of meetings kick off from Friday.

Host Japan is keen to win an endorsement for its position that fiscal stimulus is the way to spur global growth, as a rally in the yen hits exporters and accelerates a slowdown at home. But Tokyo's threat of a market intervention to reverse the rise has put it on a collision course with other G7 nations, including the United States, which rejected suggestions the yen was too strong.

Washington recently put Japan on a new currency watchlist, along with China and Germany.

The G7 group - also including Britain, Canada, France, Germany, and Italy - will use the meetings to hammer out their strategy for keeping a global recession at bay.

In April, the International Monetary Fund cut its forecast for world growth for the third time in six months, as a slowdown in China and other emerging economies raised fears that the worst was yet to come.

IMF chief Christine Lagarde is expected to attend this week's meeting in Japan.

"There are many parts of the global economy that are uncertain," Japanese Finance Minister Taro Aso said in Tokyo on Tuesday.

"How the G7 coordinates efforts to deal with them will be a major subject of discussions." But finding a deal could be a challenge. Premier Shinzo Abe's pitch for large-scale stimulus spending got a cool response from German Chancellor Angela Merkel and British Prime Minister David Cameron this month.

Merkel suggested Germany was already doing its part to put the global economy back on track, pointing to the extra economic activity generated by the arrival of 1 million refugees and migrants last year.

Her Finance Minister Wolfgang Schaeuble this week pointed to reforms as the way forward, rather than focusing on more government spending and monetary policy.

"The strategy of stimulating the economy with borrowed money quickly loses steam - it's like setting straw on fire," he told the Japan's leading Nikkei business daily in an interview published Monday.

"It's important that we promote structural reforms and cut public debt, rather than use fiscal policy to stimulate growth."

The finance minister meeting comes a week before a G7 summit in Ise-Shima, a region between Tokyo and Osaka.

After that meeting, Barack Obama will go to Hiroshima in a hugely symbolic trip as the first sitting U.S. president to visit the nuclear bombed city.

Top U.S. finance official Lew - who is being joined at this week's meeting by Federal Reserve chief Janet Yellen - will take a strong stand against any moves that could set off a currency war in which countries devalue their units to gain a trade advantage, said a senior U.S. Treasury official.

An earlier G20 agreement saw member nations, including Japan, agree not to manipulate their currencies.

"Policymakers need to work together to ensure that weakness in global growth is not becoming entrenched," the U.S. official said.

"Secretary Lew will emphasize that all G7 economies need to pull (out) the full set of economic policy tools including monetary, fiscal and structural policy to address" the global slowdown.

Terrorist financing and offshore tax havens at the heart of the Panama Papers investigation will also be discussed at the meeting, which is being held in a region that was badly damaged by Japan's 2011 quake-tsunami disaster. Britain's referendum on its future in the European Union could also be on the agenda.
RELATED TOPICS