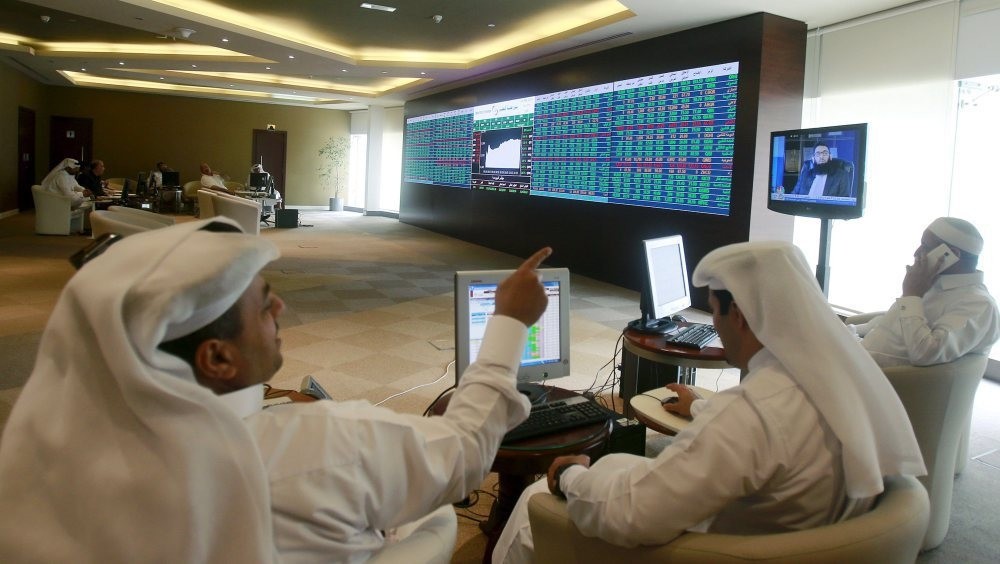 Gulf investors, such as these seen watching an electronic share price display at the Doha Stock Exchange in downtown Doha, Qatar, are among those expacted to be invited by the government to promote Sukuks.
by Daily Sabah May 19, 2016 12:00 am

While the government has been determined to maintain its efforts to promote the Islamic banking system, the deputy prime minister in charge of the economy, Şimşek, has said Turkey will hold meetings to increase sukuk exports

Deputy prime minister in charge of the economy, Mehmet Şimşek, said the government is intensifying efforts to develop the participation banking system, as Turkey plans to hold investor meetings for the export of "sukuk" (Islamic bonds) to foreign markets in the first half of 2016.

Speaking at the annual meeting of the Islamic Development Bank (IDB), Şimşek said that the country is preparing a draft law which would bring balance to the taxation of Islamic financial contracts and encourage long-term loans in response to the regular burden of financial debts resulting from sukuk exports. "Whether through sukuk or something else, we want to prepare tax regulations that regard all instruments of participation banking equally," Şimşek added.

Indicating that the government could evaluate incurring debt as well as sukuk exports over a term longer than five years, Şimşek said that the Ministry wants this system but implementation depends on investor interest; adding that, if requested, the term would definitely be extended.

Regarding the establishment of a megabank in collaboration with the Islamic Development Bank (IDB), Şimşek said the decision has yet to be made; however, the probable scenario includes two megabanks; namely, one in Indonesia and the second in Turkey. The deputy prime minister also said that the decision will be made soon in hopes that both countries will take steps to establish the banks. Stressing that the IDB meeting was held during a period when global growth had fallen due to geopolitical and economic problems, Şimşek said the effects of such issues on the global economy will persist this year as well with potential effects on the Organization of Islamic Cooperation (OIC) member states, international financial institutions and the IDB. While global and regional trends warrant policy changes related to long-term development problems as well as structural reforms for sustainable and comprehensive growth,the UN's Sustainable Development Goals (SDGs) that were approved last year are the key to providing guidance for all stakeholders, according to Şimşek.

The deputy prime minister added that they are pleased with the working methods and strategies put forth by the IDB within the framework of the SDGs; especially with regard to the 10-year strategy that underlines the IDB's strategic goals.

Stressing his support for the IDB's designation of its strategy within the SDGs, Şimşek said the development agendas of UN member nations have not been completed yet. According to Şimşek, 23 percent of the population in member nations - or 268 million people - live at the poverty line. During this period, the IDB will play an important role by mobilizing additional financing resources in order for its members to achieve the SDGs, and the bank's approval of $12 billion in finance last year despite a difficult working environment is seen as a reflection of this undertaking.