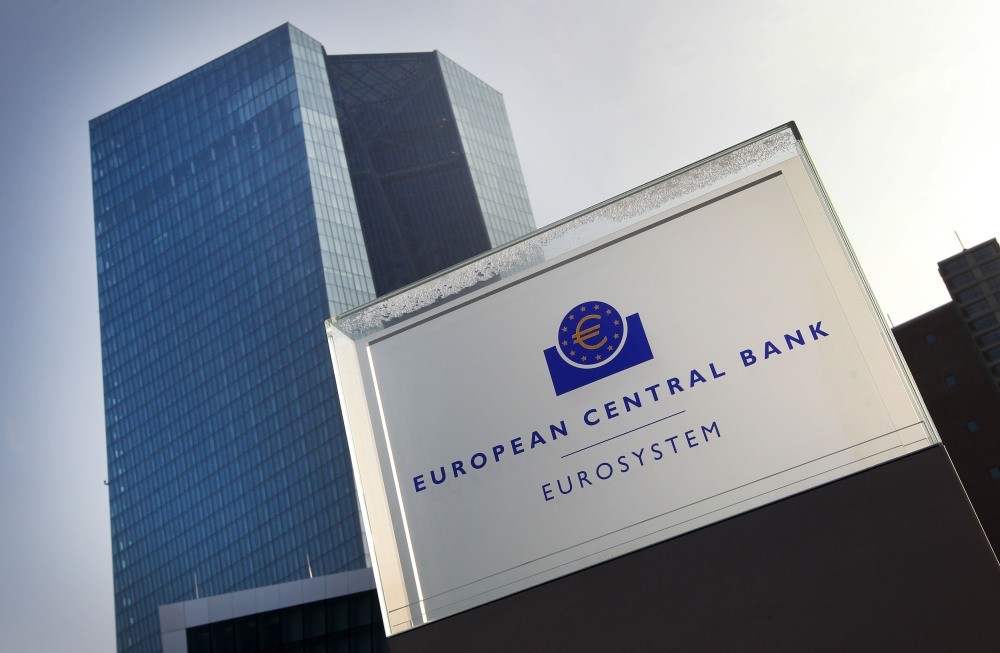 This file photo shows the headquarters of the European Central Bank in Frankfurt am Main, Germany.
by May 26, 2016 12:00 am

Presenting differing views on the future of the eurozone, French central bank chief Francois Villeroy de Galhau and Dutch national bank Governor Klaas Knot both warned that the eurozone has grown too reliant on the European Central Bank's unprecedented stimulus and needs to rethink how the bloc functions.

"What monetary policy can achieve in terms of growth is very limited," Knot, a member of the ECB's rate setting body said. "Monetary stimulus is reaching its limits and if it is maintained for too long, it has negative side effects such as financial imbalances and misallocations in the broader economy." Cutting rates deep into negative territory, buying 1.7 trillion euros ($1.90 trillion) worth of assets and offering ultra cheap loans to the bank sector, the ECB has pushed eurozone growth above potential in recent years, giving Europe its best stretch since the start of the financial crisis. But eurozone countries have still diverged over the past decade, with Italy, Spain, Portugal and Greece falling behind their peers, challenging the notion of convergence and threatening the very viability of the currency bloc as public confidence erodes and social tensions rise. Villeroy argued that the relative stability of the eurozone nonetheless opens a window to reform and that the currency bloc should now set up an institution to fully coordinate national fiscal and structural policies, transferring some national authority to a powerful euro zone finance minister with a budget.

Such a minister should eventually preside over a euro area budget, backed by a Treasury administration, because the lack of economic coordination weighs on growth and keeps the bloc vulnerable to crises, Villeroy, who is also a member of the ECB's Governing Council argued. "In the first stage, member states would be free to join... In a second stage, this budget could become a common stabilisation instrument, centralising a well-defined set of policy instruments, such as a European layer for unemployment insurance."

"The third and final stage of fiscal integration would only be achieved if agreement can be found both on financing and on the desirable level of business cycle synchronization," Villeroy said.

Such proposals are relatively common among those in the bloc seeking tighter integration. But there is often little appetite for them among some member states.

Expressing scepticism with political will for such a leap, Knot argued for an incremental approach to integration with a focus on minimum criteria for stability and growth. "Leaps forward in European integration are difficult to conceive right now," Knot said, arguing for what he called 'no regret' options. Knot said Europe needed to strengthen compliance with its budget rules, complete the banking union and implement the bloc's services directive, which alone would add 1.5 percent to growth. He also argued for some sort of debt restructuring mechanism for sovereigns to ensure that bondholders share the risk before public institutions become liable. In the same vein, he also argued for risk weights on sovereign debt to break to nexus between sovereign and their banks.

The ECB is expected to keep its accommodative stance unchanged through the summer months but many expect it to discuss in the fall whether to extend its current stimulus program or start winding it down next March.