Turkey no longer buying US drones, will rely on local technology instead 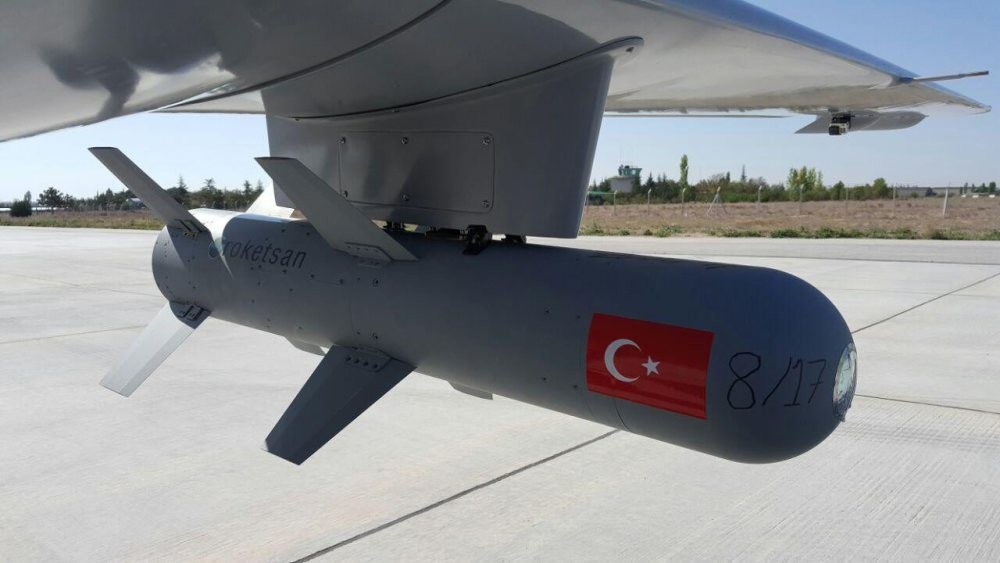 In April, the Bayraktar hit a target with an MAM-L smart ammunition projectile manufactured in collaboration with Kale-Baykar. (IHA Photo)
by Daily Sabah with AA May 28, 2016 12:00 am

Motivated by the desire to reduce its foreign dependency, the head of the defense industry said Turkey has considerably developed its defense and aviation industries, particularly drones, which Turkey has ceased buying from the U.S.

A United States restriction on the sale of some weapon systems has driven Turkey to develop its own technologies, Defense Industry Undersecretary Ismail Demir said Thursday. "I don't mean to be sarcastic, but I would like to thank [the U.S. government] for the projects that were not approved because it forced us to develop our own systems," he said, speaking during a panel discussion at the Atlantic Council think tank.

While Turkey fights the PKK terrorist group as well as DAESH, the U.S. congress has dragged its feet on approving the sale of armed drones and guided ammunitions to its NATO ally, citing concerns about the Turkish Armed Forces' fight against the terrorists in southeastern Turkey and northern Iraq.

As such, Turkey has developed tactical unmanned armed aircraft that are now operational in the fight against terrorist groups, Demir said, adding that Ankara will no longer need U.S. drones. "Unfortunately, in the case of armed drones and on our part, we have closed that page," he said. He added that Turkey has developed its own guided ammunitions and is developing more.

Among the most striking examples of Turkey's success in developing its own war technologies, the Turkish-engineered tactical unmanned aerial vehicle (UAV) Bayraktar (or Bayraktar İHA), designed and developed by Baykar Makina, have proven a highly capable machine of the Turkish defense and aviation industry. The Bayraktar İHA shot a MAM-L smart ammunition projectile with a warhead for the first time during a test conducted in late April. Also, the ammunition, fired from the UAV manufactured in collaboration with Kale-Baykar on a shooting range near the central Anatolian city of Konya, was developed by Roketsan and hit the bull's-eye. The firing capabilities of the Bayraktar were testedfor the first time this past December. The first shot occurred with ammunition without the warhead. Furthermore, over the next few months, the Turkish Armed Forces is planning to deploy Bayraktar drones upon the completion of all required tests.

In ongoing tests, the drones are expected to carry ammunition. Each MAM-L and MAM-C projectile, also developed by Roketsan for the drone platforms, weighs 22.5 kilograms each. The guided ammo with the warhead, weighing 10 kilograms, can hit a target from 8 kilometers away. Following the DAESH missile attacks in the southern province of Kilis, Turkey ordered Predator drones from the U.S. Now, with the advancements made with the Bayraktar drones, they are expected to be used as an armed platform in the concerned region.

Blocking arm sales to Turkey would not constitute a setback for Ankara in terms of its national security goals, according to Demir, who cautioned the U.S. that the restriction would not be productive for long-term strategic relations between the two allies. "In terms of defense technologies, once we render, we will develop it. It might take a longer time for us but we will do it," he said, adding that Turkey's goal is to become more independent in defense and technology.

In the meantime, Demir is in the U.S. for a meeting on the F-35 Lightning program at Luke Air Force Base in Phoenix, Arizona. In addition, according to the defense undersecretary, as one of the strongest air powers in NATO, Turkey has been developing its indigenous fighter jets, planned to be made operational by 2020. He said that as Turkey engages in international joint defense technology projects, it has learned a lot that will help its own programs.

Noting the challenges that the F-35 project - a joint venture with nine U.S. allies that has been criticized particularly by the U.S. congress for running over budget and schedule - Demir said Turkey is "ambitious and optimistic" but also "well-aware of the risks" related to the technological acquisition as well as financial challenges to produce its own aircraft. "We will go very carefully," he said. "We know about the experiences related to budget and time."

He added that Turkey has been looking at involving tech companies as partners in the fighter project but stressed that Ankara does not "want to end up with some redlines" that would limit use, development or change the original designed technologies as well as other limits on the marketing of the aircraft.
RELATED TOPICS