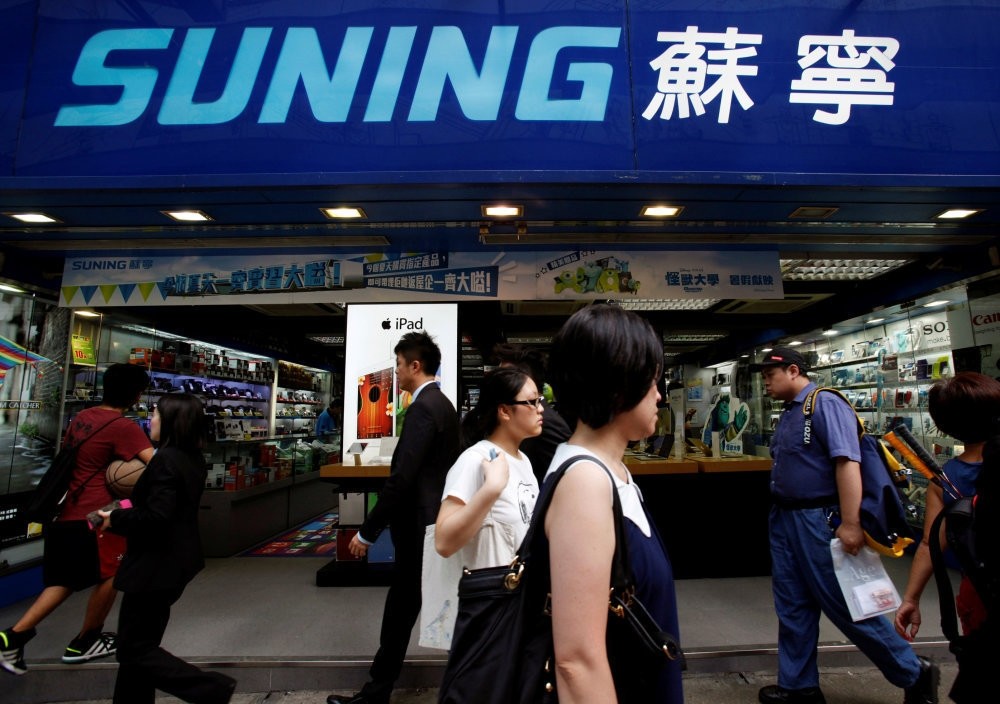 People walk past a Suning store, one of the largest home appliance retailers in Hong Kong.
by Jun 06, 2016 12:00 am
Chinese retail giant Suning Commerce Group Co Ltd, set to tie up a deal for Italian soccer club Inter Milan, is already eyeing bigger ambitions: controlling a global sports empire stretching from soccer clubs to online broadcasting. Suning and Inter Milan are due to make an announcement in the eastern Chinese city of Nanjing today, widely expected to confirm that Suning will buy a majority stake in the Italian soccer club. Amid a wider push by China to increase its standing in the game, Suning's deal for the 2010 European champions is just the start. The Chinese electronics retailer is seeking deals to help create a global sporting "ecosystem", according to a Suning Sports Group document seen by Reuters. This network would include club ownership, sports media rights, player agencies, training institutions, broadcast platforms, content production and sports-related e-commerce, the document shows.

"Suning Sports aims, through strategic expansion and acquisitions, to establish a sporting ecosystem along the whole supply chain," it said in a roughly 20-page presentation outlining its ambitions for the sports business.

A majority stake in Inter Milan would be a big step towards this. It would be a watershed moment for China's investment in the game, making Suning the first mainland Chinese business to control a major European soccer power. Suning will also look to become a leader globally in sports media and online, including "creating high-quality sports content" and "establishing a professional broadcast platform", it said in the presentation.

Suning, which has annual revenues topping $20 billion, already has some blocks in place: it owns local club Jiangsu Suning and has splashed millions of dollars on players such as Brazil's Alex Teixeira and former Chelsea midfielder Ramires. It also has ties with Spanish champions FC Barcelona, England's Liverpool FC and a stake in Chinese online content platform PPTV, with sporting content including the Chinese Super League as well as Euro 2016 starting later this month. The drive tallies with Chinese President Xi Jinping's own goals, which includes ambitious plan to create a domestic sports industry worth $850 billion by 2025. Xi is a keen soccer fan and wants China to one day host, and win, the World Cup.