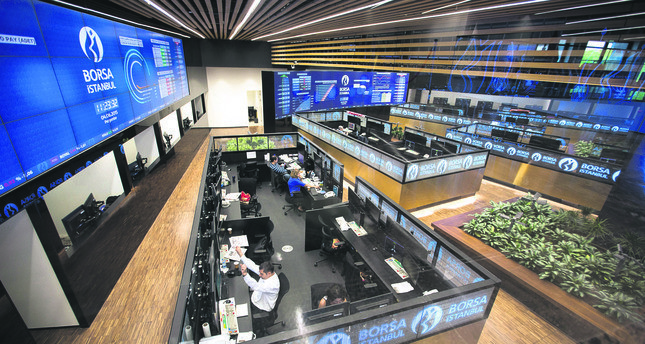 After experiencing a nearly 9 percent decrease in May, the Borsa Istanbul 100 Index will be affected by the U.K.'s Brexit vote and the U.S. Federal Reserve meeting this month

The BIST (Borsa Istanbul) 100 Index was trending up the first four months of the year, but decreased by 8.82 percent in May. It began by increasing 18.96 percent in the first quarter, with the index meeting general purchase expectations - summed up as "sell in May and go away" in stock exchange circles - with its decline in May.

While horizontal or positive movement was observed in stock exchanges in developed countries in May, stock exchanges in emerging counties, including Turkey, were under purchase pressure combined with an increase in interest rate hike expectations from the U.S. Federal Reserve System (Fed).

According to analysts, the Justice and Development Party's (AK Party) decision to hold an extraordinary congress in early May led lira assets to decrease negatively; however, fluctuations related to global markets bounced back after the congress took place on May 22, and Binali Yıldırım was selected as the country's new prime minister. Closing April at 85.328 points, the BIST 100 Index closed May at 77.803 points after falling to 76.208 points.

Stressing that the Fed's decision, interest rate expectations relating to coming periods and the UK's Brexit poll will be decisive factors on investors' pricing behaviors in global markets, analysts suggest that in the country, the Central Bank of Turkey will be monitored regarding continuity in its interest rate discounts.

The Fed and Brexit

Answering questions regarding the issue, Gedik Investments Research Manager Üzeyir Doğan stated that the main item on the agenda during June would be expectations related to the Fed until it meets on June 15. Saying that there have been frequent indications from Fed members regarding interest rate hikes in June or July, Doğan said, "This situation causes the dollar to increase in value in international markets and causes increases in equity markets and commodities, especially in emerging countries."

Indicating that the dollar's value in the international market was a good indication of the Fed's hawk and dove extremes, Doğan pointed out that when the dollar index, which was maintaining between 95-96, approached 93, the Fed showed it hawk face, and when it reached 100, the Fed showed its dove face.

Stating that one of the agenda topics this month was the Brexit poll on June 23 when Britain decides whether to continue as a member of the European Union, Doğan said: "Even though a recent survey indicates pro-EU voters are ahead by a nose, it is open to surprises due to the voting rate for the majority of swing voters expected to be low. Contrary to expectations, Britain's exit from the EU may cause cracks in the EU's foundations and serious financial turbulence."

According to Doğan, after the Brexit poll it may be necessary to sit back and observe the initial impacts and later weigh all the scenarios. "Despite becoming attractive in multipliers along with the BIST 100 Index's decline in May, the high trend of CDS [Credit Default Swaps] in international markets indicates that the fragile period is not over yet."

Stressing that global optimism was needed for an increase in short-term purchase appetites, Doğan said if the BIST 100 Index fell to 75,000 points, the appetite of middle and long-term buyers would increase as long as there is not an important change in national politics.

Turkish Investment Research Department head Baki Atılal said June was the most difficult month to predict for this year.

Atılal said among the major risks before the markets were the increase in the anti-euro discourse, if the controversial labor law in France is passed in its Senate on June 8 and the excessive volatility that may occur in the pound and euro if Britain says "yes" to Brexit in its EU referendum on June 23.

Saying that Spain would go to the polls for the second time on June 26, Atılal pointed out that the MSCI Turkish Index showed a 10 and 14 percent lower performance than emerging markets and developed markets, respectively, in May.

Stating that if the 76,200 support of the BIST 100 Index was technically broken, the 75,300 level may come to the fore, Atılal said: "I think Fed and Brexit will be the main agenda setting topics regarding direction. However, the fact that we get to attractive levels in terms of evaluations once again may lead the index to move to the 76,000-81,000 band under normal circumstances. The biggest factor before investors' purchase appetite is the lack of stories, but we are on the positive side of the shares by using stop-loss levels."
RELATED TOPICS