Chinese acquisitions ebbing while US campaign heats up 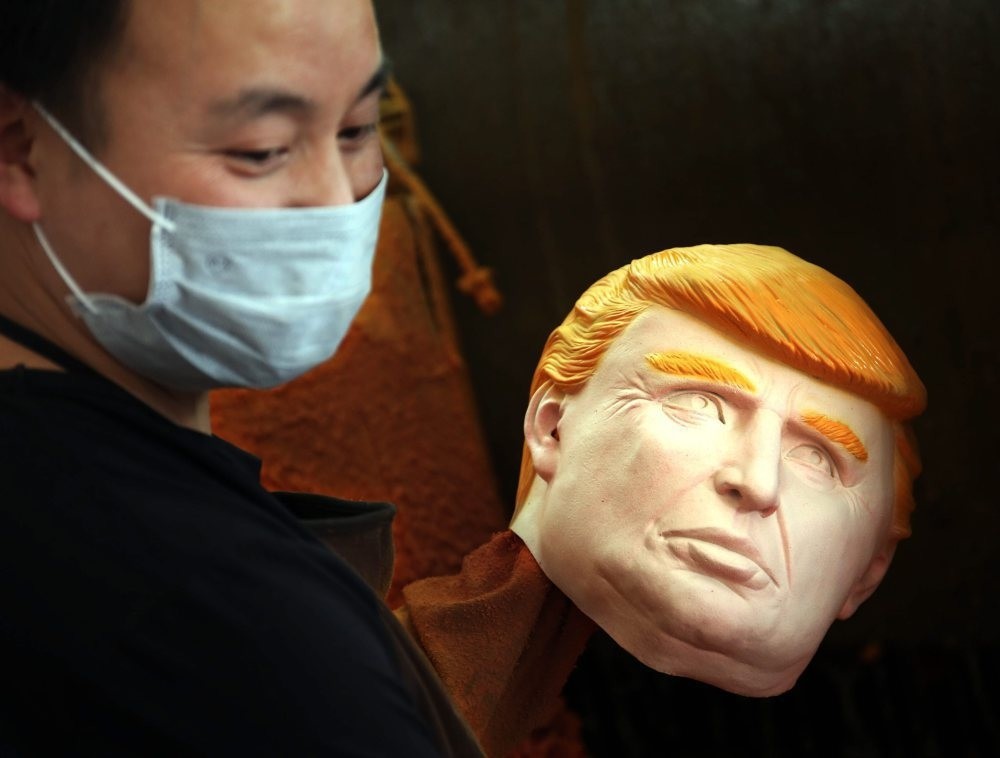 A man works on latex masks of U.S. presidential candidate Donald Trump at a factory in Pujiang county in east China's Zhejiang province. Orders for Donald Trump and Hilary Clinton masks have both exceed 500,000 pieces from the factory.
by Jun 08, 2016 12:00 am

Uncertainty about the ultimate winner could give Chinese buyers pause, lawyers and bankers have said, as the presumptive Republican nominee Donald Trump has regularly accused China of stealing U.S. jobs

After snapping up assets at a record pace so far this year, Chinese buyers are expected to hold back in the run-up to the U.S. presidential election in November, nervous that campaign rhetoric might invite closer regulatory scrutiny of deals. Uncertainty about the ultimate winner could also give buyers pause, said lawyers and bankers, as the presumptive Republican nominee, Donald Trump, has regularly accused China of stealing U.S. jobs and manipulating its currency for unfair trade advantage.

"The identity, let alone the foreign policy of the incoming presidential candidate in the U.S., isn't exactly clear, and it is fair to say there is considerable uncertainty about how that will play out in the China market," said Andrew McGinty, a Shanghai-based partner at law firm Hogan Lovells International, who has advised on mergers and acquisitions in China for two decades.

Chinese foreign acquisitions this year have totalled $104 billion, close to the total announced last year, but there have also been a record nearly $27 billion of failed attempts, mostly in the United States, and mostly due to regulatory pushback. Figures for deals announced in March through May are already down from a peak in February. The latest Chinese outbound deal to run into regulatory trouble is Anbang Insurance Group's proposed $1.57 billion bid for U.S. peer Fidelity & Guaranty Life. The New York regulator has asked Anbang to withdraw its application after it failed to provide information requested for processing the deal. Any deal launched for a U.S. target now is unlikely to secure all the required regulatory clearances before the November election, and most buyers will think twice before launching sensitive deals during the most intense period of campaigning, bankers say.

"That will create a certain amount of uncertainty within Chinese buyers because people want to know, 'Well, who is it going to be looking at my deals?' especially if you consider the

CFIUS aspect," said McGinty, who has nearly two decades of experience in China. The Committee on Foreign Investment in the United States (CFIUS), which reviews deals for potential national security threats, has emerged as a significant risk for Chinese companies making U.S. acquisitions. The United States is also seeking to broaden the committee's powers.

Some technology-related acquisitions from China have faced unexpected and intense CFIUS scrutiny, leading to some deals being pulled. In February, China state-backed Unisplendor Corp scrapped a $3.78 billion bid for Western Digital Corp after CFIUS said it would investigate the transaction.

"This (scrutiny) is not likely to decrease any time soon and may increase, at least in the short term, after a new president takes office," said Anne Salladin, special counsel with Stroock & Stroock & Lavan LLP, who advises on CFIUS matters.

Trump has not made comments on Chinese acquisitions, but has called for 45 percent tariffs on imports from China. Chinese officials have generally avoided criticising Trump directly,

though they have disputed his claims. Salladin said Trump has taken a hard line toward China and other countries during the Republican primary campaign, but noted that presidential candidates would often "move toward the center" during the campaign proper and might, if elected, govern differently from their campaign rhetoric.

Another area of concern for some experts is how a new U.S. president would tackle the long-contentious subject of foreign currency. China and the United States have traded accusations of currency manipulation for years before Trump's campaign chimed in.

"Chinese investments in the U.S. will be less and less popular. It will be a more difficult business climate," Forchielli said. "Chinese corporates, however, are not worried about U.S. elections. They know that in an electoral year there is a phase of China bashing. They will continue to buy."