Samsung races to get up to speed on biosimilar drugs 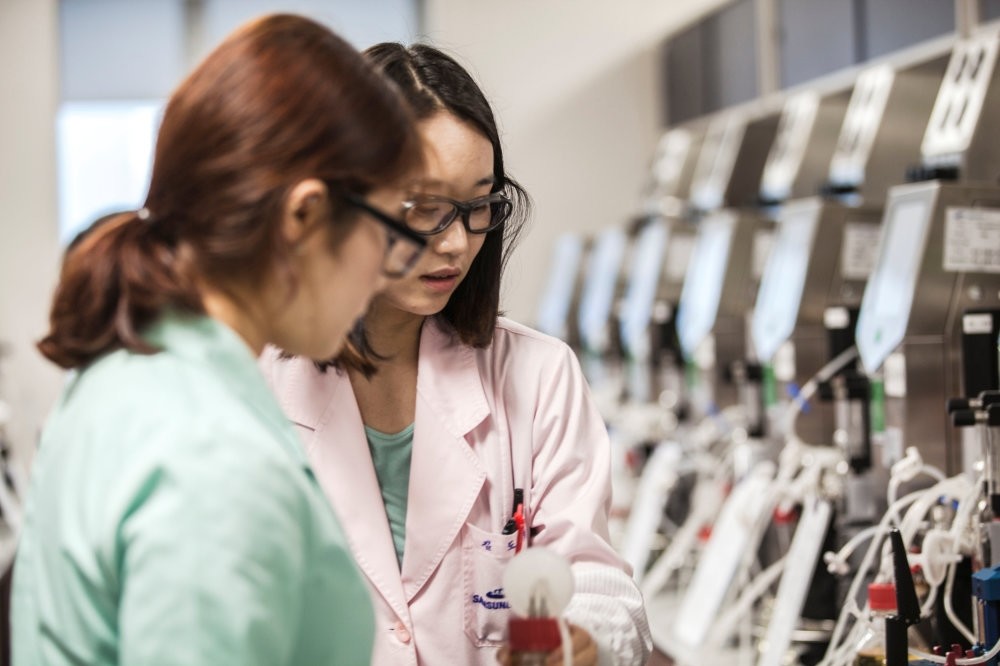 Employees work at Samsung Bioepis labs in Incheon.
by Jun 08, 2016 12:00 am
As Samsung Bioepis raced to be first to market with a copy of Enbrel, a blockbuster rheumatoid arthritis drug, countdown clocks reminded workers - heading for lunch, meetings or even the washroom - of the days to the first mass production run. Founded four years ago by South Korea's Samsung Group and with a goal to be first or second to market with more than a dozen so-called biosimilar drugs, Bioepis is fixated on speed.

"At 6 a.m. every day, before everyone arrived at the office, the numbers would change," said Brian Min, a Bioepis vice president for product development. "Had the ... run failed, we would have faced a delay of a year or two."

Samsung hopes its biopharmaceuticals push, championed by group heir-apparent Jay Y. Lee, can help offset a slowing smartphone market at its flagship Samsung Electronics. Medical officials and insurers in the United States and Europe hope biosimilars - cheaper copies of complex biotech drugs - will significantly cut healthcare costs. Patents for more than 10 blockbuster biological drugs with combined annual sales of $60 billion will expire in the U.S and Europe over the next four years, according to Allied Market Research, opening a potentially lucrative biosimilars market. Global revenue for the biosimilar industry could balloon to $26.6 billion by 2020 from $2.6 billion in 2014. Samsung, South Korea's biggest family-run conglomerate, is betting with Bioepis that deep pockets and a willingness to play a long game can put it ahead of established players. Bioepis is 91.2 percent owned by Samsung BioLogics, a contract drug maker.

Novartis' Sandoz and South Korea's Celltrion have also recently launched copies of some top-selling prescription drugs at significant discounts. Early this year, Bioepis was first to launch a biosimilar version of Amgen's Enbrel in Europe, after just four years in development - roughly twice as fast as some biosimilars take to come to market. To quickly get up to speed in an unfamiliar industry, Samsung enlisted drugmaker Biogen as a Bioepis shareholder, scouted industry veterans from firms such as Novartis and Eli Lilly and surrounded them with young recruits. It has agreements with Biogen and Merck to sell and distribute some of its biosimilars. Yet to turn a profit, Bioepis expects revenue of 1 trillion won ($839 million) in 2020 and plans a U.S. initial public offering, when the time is right. For comparison, Samsung Electronics had revenue last year of 201 trillion won. To get its biosimilars to market ahead of rivals, Bioepis is speeding up processes it can control. It tasked 300 researchers to run 1,500 experiments to cut down on development time for its Enbrel copy, dedicating about 100 bioreactors to the effort. It's tough for rivals to match that scale as pure-play biosimilar makers tend to be smaller start-ups and "big pharma" tends to focus more on original drugs, analysts say.

"The speed means Bioepis is investing a lot of money, more than its competitors," said Eugene Investment & Securities analyst Han Byung-hwa. Bioepis also took a calculated risk by scaling up to mass production ahead of clinical trials, knowing it would make much more than needed, which would allow it to get to market quicker following regulatory approval.

"As the saying goes in our industry, 'process is the product'," said Bioepis' Min. "Equally important, process is what allows us to shorten timeframes for almost every phase of biosimilar development." Bioepis' copy of Johnson & Johnson's Remicade, another rheumatoid arthritis drug, won final European regulatory approval last month. Celltrion won approval first, but took about seven years to get there. "They've got far, far more people doing the jobs that other companies just simply don't have, so I think it's about efficiency and resources," said Duncan Emerton, pharmaceuticals analyst at FirstWord, about Bioepis.