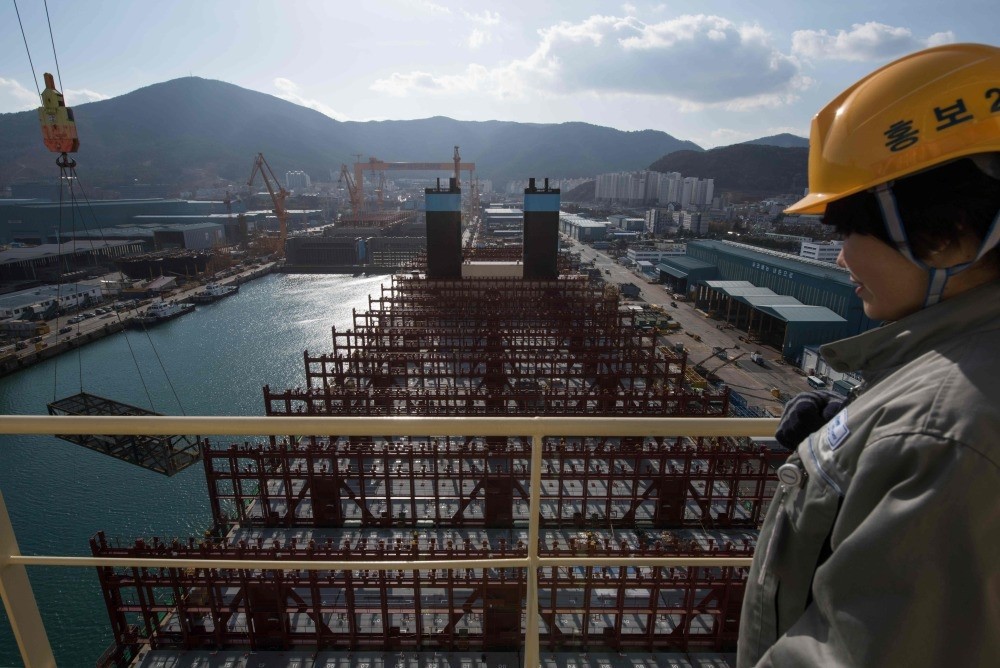 A view of the deck of an under-construction Maersk triple-E class container ship at the Daewoo DSME shipyard in Okpo.
by Jun 09, 2016 12:00 am
South Korea's government and central bank will create an 11 trillion won ($9.50 billion) fund to support two state-run banks most exposed to the country's struggling shipping and shipbuilding firms.

"Our key industries like shipping and shipbuilding are being aggressively caught up by countries like China and management conditions have worsened due to weak global trade," Finance Minister Yoo Il-ho said in a speech announcing the corporate restructuring plans yesterday.

South Korea expects a 20 percent drop in major shipbuilders' capacity and a 30 percent drop in their workforce by 2018 from 2015, after the restructuring process. The two state-run banks to be capitalised are Korea Development Bank (KDB) and the Export-Import Bank of Korea

The Bank of Korea will lend a maximum 10 trillion won for the state-bank fund via a conduit bank, the Industrial Bank of Korea (IBK), and that fund will later purchase contingent convertible bonds (CoCos) from the two state-banks. Contingent convertible bonds are hybrid assets that can be switched by the borrower from bonds into shares if a pre-set trigger is reached. The rest of the capital for the state-bank fund will be provided by loans from Korea Asset Management Corporation (KAMCO), a state-backed distressed assets bank, which will also be in charge of setting up the actual fund. The fund is expected to be operational by end-2017.

Separately, the government plans to transfer 1 trillion won worth of assets to KEXIM by September, which will be reflected in next year's budget. The central bank will also consider direct capital injections into KEXIM in the future, if needed.

South Korea's top three shipbuilders have also come up with plans to weather the difficult market conditions, which they see lasting for the next two to three years. The world's three largest shipbuilders, Hyundai Heavy Industries, Samsung Heavy Industries and Daewoo Shipbuilding & Marine Engineering, have submitted additional plans to sell up to 4.8 trillion won in combined assets and find 3.6 trillion won through cost cuts, the government said in a statement. Daewoo Shipbuilding plans to sell up to 1.6 trillion won in assets including 14 subsidiaries and raise 1.9 trillion won in cost cuts, the government said, while Samsung Heavy said in a separate statement it plans to sell shares to raise funds, without elaborating. Hyundai Heavy said in a statement it will sell shares in Hyundai Motor and construction materials maker KCC Corp among other assets and spin-off businesses. The restructuring and financial support of the sector comes amid wider scrutiny of the management of the industry.