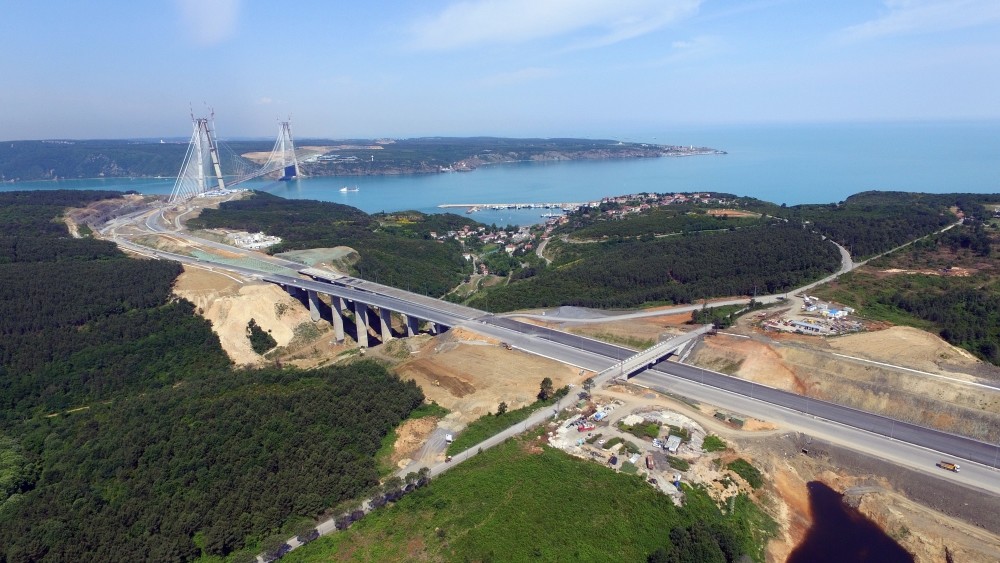 All efforts have been made to complete the Yavuz Sultan Selim Bridge, Istanbul's third bridge, and its access roads to alleviate the traffic problems, prior to the announced date of Aug. 26

The Yavuz Sultan Selim Bridge - part of the North Marmara Highway Project - will be one of the world's widest bridges when completed. It has a total of 10 lanes - eight lanes of highway and two rail lines.

The Yavuz Sultan Selim Bridge will alleviate the problem of TL 3 billion (41 billion) in annual losses that are caused by excessive gas consumption and loss of work due to traffic jams on the city's first and second Bosporus bridges.

The bridge will cost $3 billion in total and be 59 meters wide and reach a tower height of 322 meters. The bridge, which will in total run 2,164 meters from end to end, also stretches 1,408 meters over the Bosporus, which makes it the longest suspension bridge in the world with a rail system.

Bridge to be opened on Aug. 26

The aim of the bridge is to ease Istanbul's traffic jams; provide vehicles with access to a controlled, high-standard, uninterrupted, safe and comfortable way to travel and also to save time, and reduce traffic density within the city by providing integration with other transportation types. The elimination of air pollution and other environmental problems caused by traffic congestion in Istanbul is another aim of the bridge project. The bridge is expected to be opened on Aug. 26, as will its 120-kilometer-long highway and access roads.

Bids were completed for the 169-kilometer long Kurtköy-Akyazı and 88-kilometer long Kınalı-Odayeri sections as a part of the North Marmara Highway Project, and the winners were announced.

In addition to reaching the final phase in the superstructure's works, asphalt paving operations on the bridge have also been completed. Sandblasting was carried out on the steel bridge's deck slab, and the bridge's surface was protected against corrosion with paint and insulation materials. After the insulation layer, the asphalting process was completed with high-quality mastic and stone asphalts in two phases. A natural bitumen called TLA was used in the mastic asphalt mixture.

A total of 11,500 tons of asphalt were paved on the main span and the rear span of the bridge. A team of approximately 150 people worked night and day in the asphalt paving phase of the project. The insulation and asphalt operations were completed in less than two months.

The assembly of the tip covers of the bridge, whose concept design was completed by structural engineer Michel Virlogeux and the Swedish TI Engineering firm, has also started. After they are assembled, the tip covers will be lifted nearly 300 meters high with the help of cranes and placed on the towers. After that, the 322-meter high bridge towers will be completed.
RELATED TOPICS