Germany to mediate between EU, China after bloc’s refusal to classify China as market economy 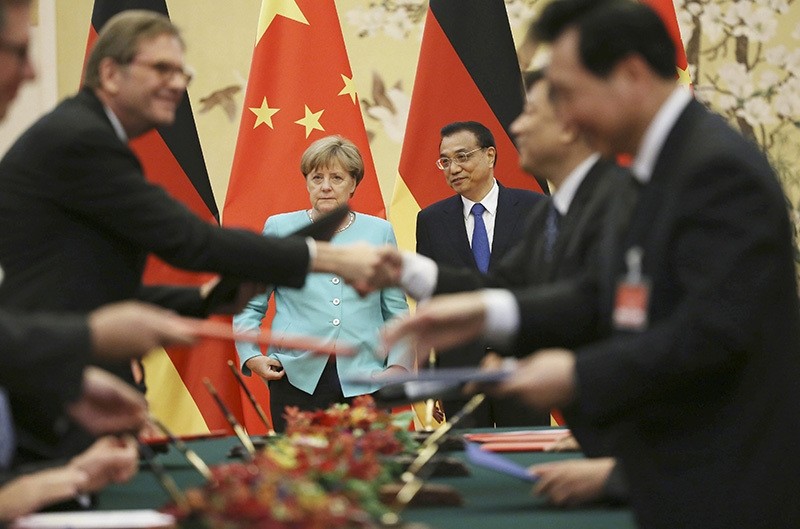 Angela Merkel (back, L) and Chinese Premier Li Keqiang (back, R) look on as delegates exchange documents during signing ceremony at the Great Hall of the People in Beijing (EPA)
by Jun 13, 2016 12:00 am
In a looming trade conflict over Europe's refusal to classify China as a market economy, German Chancellor Angela Merkel said in Beijing on Monday that Germany would act as a mediator.

"We remember our pledge," Merkel said, referring to protocols where China would be considered for classification as a market economy 15 years after its accession to the World Trade Organization in 2001.

The official Xinhua news agency said in a commentary last week that the European Union's refusal to fulfill its obligations this year could force China to resort to legal litigation where "the worst scenario could be an all-out trade war between the two economies."

Market economy status would relax some of the anti-dumping regulations currently applied to China's exports.

"I don't think a heated tone helps in this issue," Merkel said during the fourth Sino-German joint cabinet meeting in Beijing.

Chinese Premier Li Keqiang took a strong tone. "China has fulfilled its obligations when it entered the WTO. Now it's others' turn to fulfill their obligations," he told reporters.

The EU accuses China of exacerbating an overproduction crisis in the global steel market with unfairly cheap exports and subsidies that are allowing its manufacturers to grow despite the lack of demand.

The EU must be able to "talk openly about existing problems" with China, Merkel said Sunday in reference to the steel production.

Foreign Minister Frank-Walter Steinmeier and Finance Minister Wolfgang Schaeuble and four other ministers were among the German delegates to the meeting.

The two governments and companies on both sides signed 24 agreements worth a total of 2.73 billion euros on Monday.

Germany and China agreed to help with disaster reduction as well as aid in the development of civil protections and mining in Afghanistan.

Other agreements included cooperation in environmental protection, education, health, sustainable agriculture and new mobile networks, as well as in the rail, air and automotive industries.

The joint cabinet meetings happen every two years. Merkel's visit comes amid an ongoing crackdown on the country's human rights activists and lawyers.

China's legislature in April passed a controversial law that places foreign non-governmental groups under the direct supervision of security authorities.

Since last summer, more than 300 human rights lawyers and activists from across China have been detained, summoned by police or have disappeared, according to the Hong Kong-based China Human Rights Lawyers Concern Group.

"It is always important that our companies and also our cooperation projects have a safe rule-based environment," Merkel said at the opening of talks Monday morning.

"The dialogue on rule by law as well as the human rights dialogue are of great importance," she said. "Many legal areas are affected, including for consumers and public institutions."

Merkel arrived Sunday for the three-day visit. On Sunday she visited a university in Beijing and received an honorary doctorate. On Tuesday she was to visit Shenyang in north-east of the country.
Last Update: Jun 13, 2016 3:27 pm
RELATED TOPICS