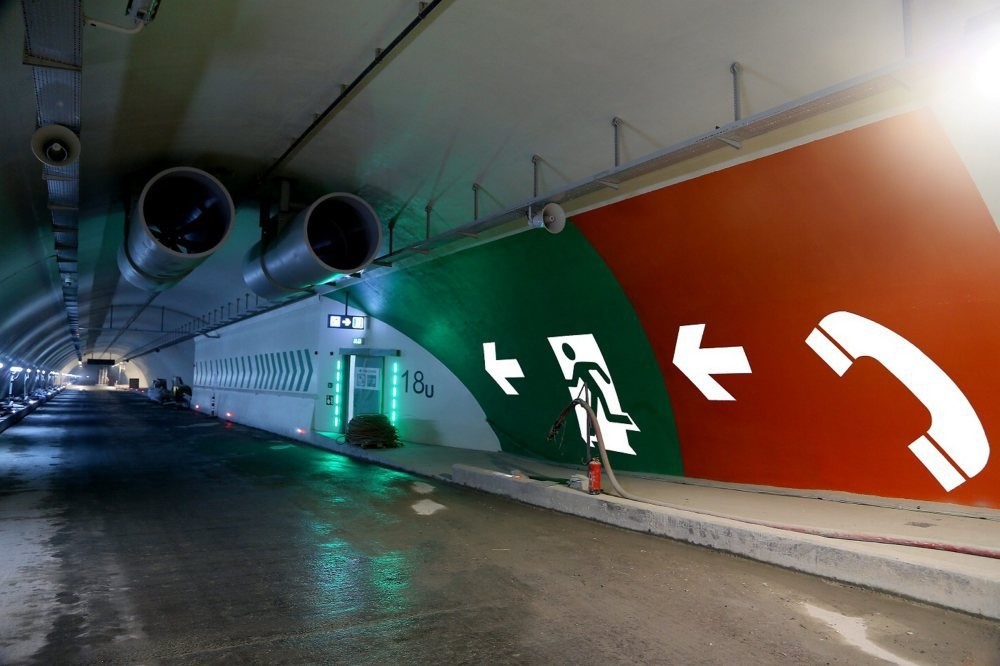 Prime Minister Yu0131ldu0131ru0131m announced on Saturday the Eurasian Tunnel, which will connect the Asian and European sides of Istanbul under the Bosporus, will open on Dec. 20.
by Daily Sabah Jun 13, 2016 12:00 am

While megaprojects are being realized one after another, Prime Minister Yıldırım announced the Eurasia Tunnel, connecting the Anatolian and the European sides of Istanbul under the Bosporos to alleviate traffic, will open on Dec. 20

Prime Minister Binali Yıldırım said the Eurasian Tunnel, which will connect the Asian and European sides of Istanbul under the Bosporus strait, should open Dec. 20. Excavation work for the tunnel started on April 19, 2014, with then prime minister, President Recep Tayyip Erdoğan in attendance and finished on Aug. 22, 2015 with a ceremony attended by former Prime Minister Ahmet Davutoğlu and various top level officials. The tunnel will connect the Kazlıçeşme neighborhood on the European side with Göztepe on the mega city's Asian side and cut travel time between the two congested areas to 15 minutes. Expanding current motorways and constructing connecting roads should also be completed this year.

The entire project spans 14.6 kilometers, with the tunnel taking up 5.4 kilometers and the section directly under the sea 3.34 kilometers. The deepest section will be 106 meters below sea level. In recent years, the city has persistently tackled its traffic problems. In December 2006, the Transport and Communication Ministry tendered the project - the Istanbul Bosporus Tube Crossing Project. The project was contracted in 2009 by a Turkish-Korean joint venture, later named the Eurasian Tunnel Operation Construction and Investment-ATAS in 2011. ATAS is responsible for construction, operation and maintenance of the project for 25 years. The Eurasia tunnel is the second underwater project in Istanbul after Marmaray, a railway tunnel underneath the Bosporus Strait that transported about 21 million passengers in the first six months after its inauguration in October 2013.

Speaking at the groundbreaking ceremony for the Bakırköy-Bahçelievler-Kirazlı subway line, Yıldırım expressed his satisfaction with the start of work in Istanbul where he worked with Erdoğan. He said: "Serving Istanbul is like adulation. Istanbul is a city of civilization, culture, history, science, knowledge and trade." Referring to Marmaray, which connects the Asian and European sides of the city by a tunnel under the Bosporus, Yıldırım said, "Like our ancestor Mehmed the Conqueror transported warships overland in the past, we are transporting trains under the sea now." Stressing that one undersea tunnel is insufficient for Istanbul, the prime minister said the Eurasian Tunnel, built to relieve heavy car traffic in the city, opens Dec. 20.
RELATED TOPICS