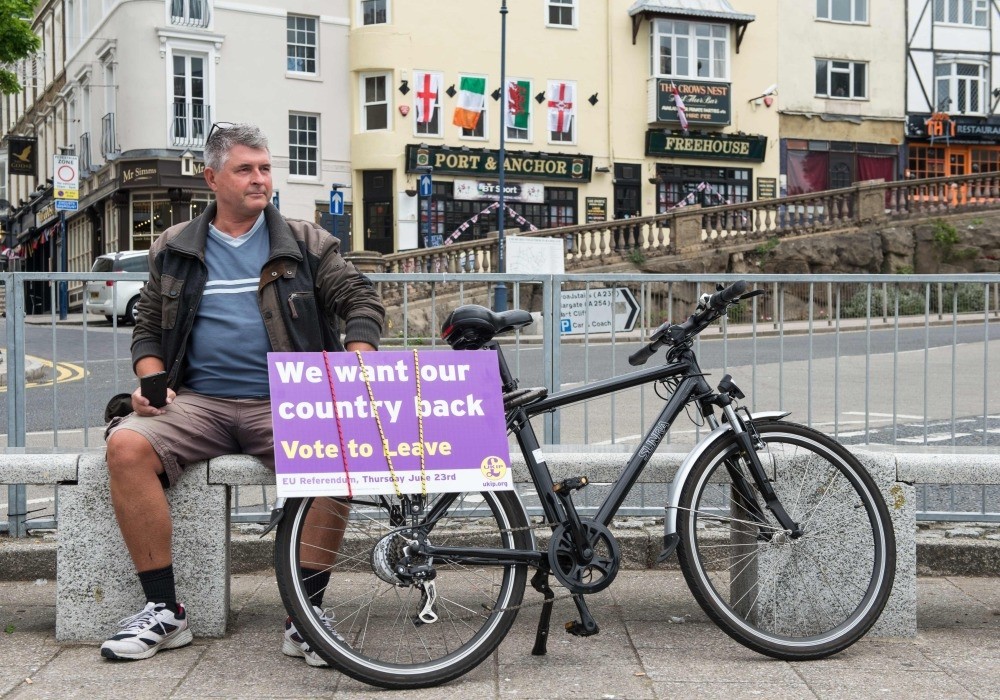 UK Independence Party supporters await the arrival of leader Nigel Farage as he goes on the campaign trail for Brexit in Ramsgate on Monday.
by Daily Sabah with AA Jun 14, 2016 12:00 am

If the 23 June EU referendum results in the UK's exit, both British and European economies are expected to be damaged in the long-term, in particular with restrictions on free movement

Close or head to head results from polls attempting to predict the outcome of the June 23 European Union referendum in the United Kingdom have increased concerns regarding the country's possible exit from the union - an outcome also known as Brexit. If the U.K. leaves the EU the aftershocks that will emerge in both economies are expected to have long-term effects. The three-year period of uncertainty after British Prime Minister David Cameron's decision to present his country with the referendum following a series of negotiations with the EU will come to an end next week.

International credit rating agencies, London-based international finance institutions and the International Monetary Fund (IMF) have continuously warned against the possible impact of Brexit. EU officials in Brussels are already in talks, however, to come up with an emergency plan to deal with Britain's possible exit of the EU.

A long and difficult process is expected to start regarding customs fees and the free movement of people, goods and services if Britain leaves. If this happens, Britain has planned to continue its current relations with the EU in accordance with the membership conditions for two years, and work with Brussels on a new agreement during this period.

Free movement is the key issue

A member of European Economic Community (EEC) for 43 years, if the U.K. decides to leave, free movement will come to the fore as the most important issue involved. Even though Britain is concerned by the current migration of refugees into the country, free movement actually contributes to the country's economy. The fact that British citizens paid 44 million visits to European countries in 2014 is one example of free movement in the opposite direction. If the U.K. chooses to leave the EU, British citizens' freedom to travel within the EU will become a controversial issue. According to the United Nations, as of the first half of 2015, 1.3 million British citizens are estimated to have moved to other EU countries. Among British citizens living abroad, 309,000 reside in Spain, while 255,000 live in Ireland and 185,000 live in France.

Trade with the EU

According to a report by London-based research company Global Counsel, Britainconstitutes one-sixth of Europe. Ten percent of the EU's total export goes to Britain. If it leaves the EU the action is expected to affect not only the British economy, but also goods and products exported by EU countries, due to changing customs fees.

Data from Britain's Office for National Statistics indicates Europe is turning into a market where the share is gradually decreasing for British exporters. While 60 percent of the U.K.'s total exports went to EU countries in 2000, that figure declined to 58 percent in 2005, 54 in 2010 and 47 percent in 2015. The U.K.'s imports from the EU maintained at a 54 percent level during the 2000-2015 period.

Analysts predict that if the U.K. leaves the EU the British pound could devalue by approximately 15 to 20 percent. The current results of polls from some survey companies in the U.K. suggest Leave supporters are a few points in the lead over Remain, a phenomenon that is enough to create pressure and volatility over the U.K.'s currency, the pound.

Even though Bank of England (BoE) President Mark Carney has tried not to declare an opinion on the referendum, he points out that they need to be prepared for all possible scenarios by highlighting the possible pressures on monetary policy. The central bank reduced growth estimations from 2.2 percent to 2 percent for 2016, from 2.4 percent to 2.3 percent for 2017 and for 2018 it reduced the estimations from 2.5 percent to 2.3 percent.

The announcement from the BoE in March states the U.K.'s economic outlook has worsened since November and the most important domestic risks regarding financial stability are related to the EU referendum. The bank's committee will take the negative effects of uncertainty on pound, spot and option markets under consideration. The increasing and continuous uncertainty can potentially increase British assets-oriented investment premium risks. While this situation may increase the devaluation of the pound, it may reduce the opportunities for finance for borrowers in England and increase the cost of borrowing.

IMF and OECD are concerned

The London-based Institute for Fiscal Studies (IFS) states that if the U.K. leaves the EU it may have to implement new austerity policies. Stressing that current austerity measures may be increased, new ones may be created in order to deal with the aftershocks of Brexit. The company said that the U.K.'s decision to leave may cost 20 to 40 billion pounds to the public purse over the 2019-2020 period.

While visiting London last month, IMF President Christine Lagarde said a Brexit means the pound might significantly devalue in parallel with the drastic decline in external financing as well as a reduction in investment and consumption.

An Organization for Economic Cooperation and Development (OECD) report similarly suggests that the U.K.'s exit might slow down the country's economic growth. Indicating that the uncertain environment may continue until late 2018 and this may reduce the investors' trust along with investments, the report points out that if the U.K. goes out of the EU, the country's economic growth may decrease by 3 percent until 2020. Britain's might be also exposed to more restrictive commercial regulations and its competitive power and direct foreign investments might decrease.

Brexit a bomb under economy

Britain's Prime Minister David Cameron hopes to close the Pandora's box he opened with his referendum promise three years ago on June 23. Cameron has said leaving would be like placing a bomb under the country's economy. U.S.-based financial institution JP Morgan's CEO Jamie Dimon said if the U.K. leaves, 4,000 people working in its operations in the U.K. may lose their jobs. Chancellor of the Exchequer George Osborne and former chancellor Alistair Darling have claimed Leave supporters do not have an economic plan.

Although the leader of the Leave campaign, London's former mayor Boris Johnson, claims Brexit will have positive effects on the country's economy, the mayor of London's finance center, "The City of London," Lord Alderman Jeffrey Mountevans does not agree. Speaking to AA, Lord Mountevans said: "The EU is highly important to Britain. We, as the finance center, clearly want to stay in the EU," also adding that it is very important for London to access the $500 million common market. The City of London contributes about 46 billion pounds to the country's economy, according to 2014 data, constituting 14 percent of London's economy and 3 percent of the country's.

International credit rating agency Standard & Poor's (S&P) warns that Brexit may put the English pound's status as the international reserve currency unit in jeopardy by preventing foreign investments and other capital influxes. According to Moody's March evaluation, Brexit means the country's credit rating outlook might potentially be drawn toward "negative." The final declaration of the G7 Summit held in Japan last month states the U.K.'s exit from the EU might seriously threaten global growth and the world economy.
RELATED TOPICS