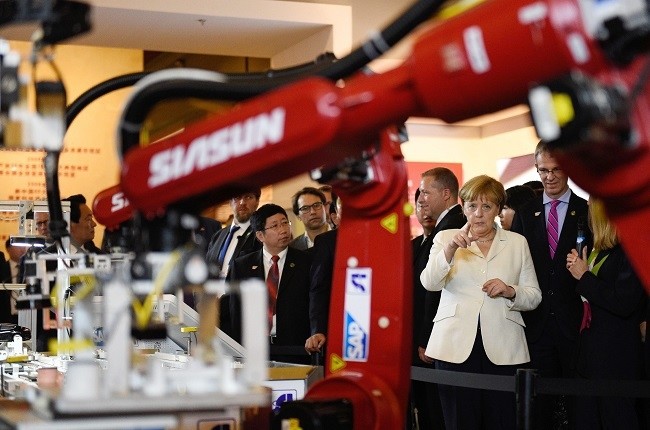 German Chancellor Angela Merkel (R) watches a presentation on industry 4.0 at the Industry Museum in Shenyang, China, 14 June 2016. (EPA Photo)
by Jun 14, 2016 12:00 am
German Chancellor Angela Merkel urged China on Tuesday to take greater responsibility for the global steel market, noting it had sharply increased its share of world steel production since becoming a member of the World Trade Organization 15 years ago.

Merkel, speaking in Shenyang during her ninth visit to China since taking office in 2005, told reporters the country now accounted for half of world steel production.

"That means China also bears a greater responsibility for the global steel market," she told reporters, noting Chinese overproduction and the resulting problems for the European steel industry.

Merkel had signalled her concerns about Chinese steel overcapacity in her weekly podcast before leaving for Beijing, saying the country's huge share of the market had created a "very complicated" situation for European Union countries.

European steelmakers have been hit by a plunge in steel prices which they blame largely on a surge in cheap exports from China, where overcapacity has been exacerbated by declining domestic demand.

The European Commission announced plans on March 16 to speed up trade defence cases against cheap imports from China and urged EU member states to end measures that could block higher duties on dumped and subsidised products.

Both Gabriel, who heads the Social Democratic Party, and Merkel, leader of the Christian Democrats, have said they want to address the issue while avoiding a trade war with China.