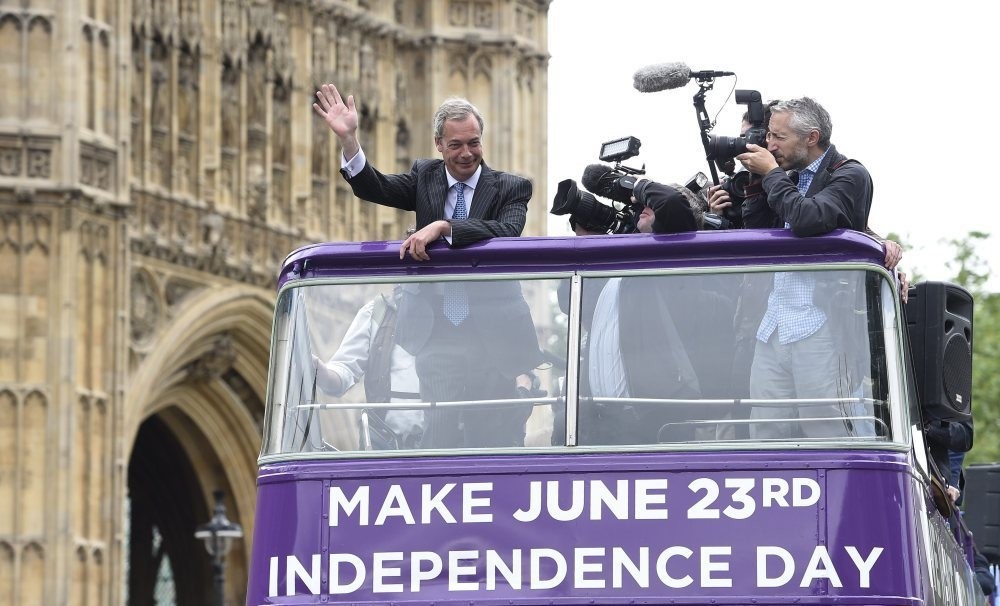 UKIP leader Nigel Farage waves to reporters during the launch of a new poster campaign ahead of the EU referendum in Smith Square, London Thursday.
by Jun 17, 2016 12:00 am

Ahead of the vote on whether Britain will leave the EU, or not, key central banks including, the U.S. Federal Reserve and the Bank of Japan, decided to not take any action, due to concerns over uncertainty in markets' reaction

Fears that Britain could quit the European Union have forced key central banks to hold off on any action, even though they desperately need to light a fire under chronically low inflation. After the Federal Reserve kept its key rates steady overnight, the Bank of Japan held fire on fresh stimulus measures. Likewise, the Swiss National Bank left its rates unchanged. The reason cited by all three: the fallout from Britain's referendum on June 23 on whether to remain in the EU.

The uncertainty in the run-up to D-Day has wreaked havoc on the markets, with investors dumping shares and sending stocks down, while shifting their funds into safe haven currencies and government bonds instead. As a result, the Japanese yen jumped to 20-month highs, while the Swiss franc was trading at 1.08 to the euro, significantly stronger than the preferred level of 1.20 that the bank had imposed until January 2015. Bond yields sank, with rock-solid German government bonds falling into negative territory as investors were willing to pay for the safety to park their cash in Bunds.

The central bank chief of "small and open" Switzerland, Thomas Jordan, also saw the risks for his country. "Next week's U.K. referendum on whether to remain in the EU may cause uncertainty and turbulence to increase. We will be monitoring the situation closely and will take measures if required," he said.

BoJ chief Haruhiko Kuroda would not say if policymakers held off fresh moves because of next week's vote. However, he said Britain was an "important" member of the EU, which has been a "great economic gift" for nations in the bloc. The BoJ "is closely watching the (referendum's) impact on the global economy, including in Japan," he told reporters. And the central bank directly caught in the eye of the storm - the Bank of England - Thursday reiterated the "significant risks" posed by the vote.

"A vote to leave the EU could materially alter the outlook for output and inflation, and therefore the appropriate setting of monetary policy," the bank said as it voted to keep its lending rate unchanged. But Carsten Brzeski, chief economist at ING bank said it was clear that the uncertainties over which way the U.K. would swing was "complicating the situation for central banks." "For the ECB it is definitely the case even though it was already in crisis mode," he said, alluding to the bank's long battle against stubbornly low inflation. "It was most difficult for the Fed because it had been seeking to get out of its low interest policy, but the uncertainty had forced it yesterday to hold off," noted Brzeski.

Some analysts had been expecting the BoJ to launch another round of easing as the world's third-largest economy falters. But the bank also sat tight as taking action now to lower the value of the yen would be rowing against the tide, given that investors were determinedly parking their cash in the safe haven currency and sending it appreciating anyway.

Although the result of the vote could remove one uncertainty from the market, it does not mean that the central bankers' jobs would become easier, analysts warn. "For the ECB, next week will be highly tensed because it may have to intervene directly in the market if there is a Brexit, and if there is turbulence in the market," said Brzeski.

Even the Swiss bank could be forced to act, said Jennifer McKeown at Capital Economics. "We see the SNB continuing to intervene in the run-up to the referendum and think that an actual Brexit would prompt much heavier intervention and an interest rate cut to -1.0 percent. Even this would be unlikely to prevent a significant appreciation of the franc in that scenario," she predicted.

But Ben May of Oxford Economics expected few moves. "Clearly if the U.K. votes to leave then it may well be a few more weeks before any central bank might feel they were in a position to make a big judgement on what the implications of that are," he said, adding however that he did not expect to see major policy shifts in the immediate aftermath. "They might make noise saying they are assessing the situation but I'd be very surprised to see someone like the ECB come out and say that we're going to increase QE or something like that in response to the U.K.'s vote. "I think that'd be unlikely unless a few weeks down the line the economy has taken a turn for the worse," he added.
RELATED TOPICS