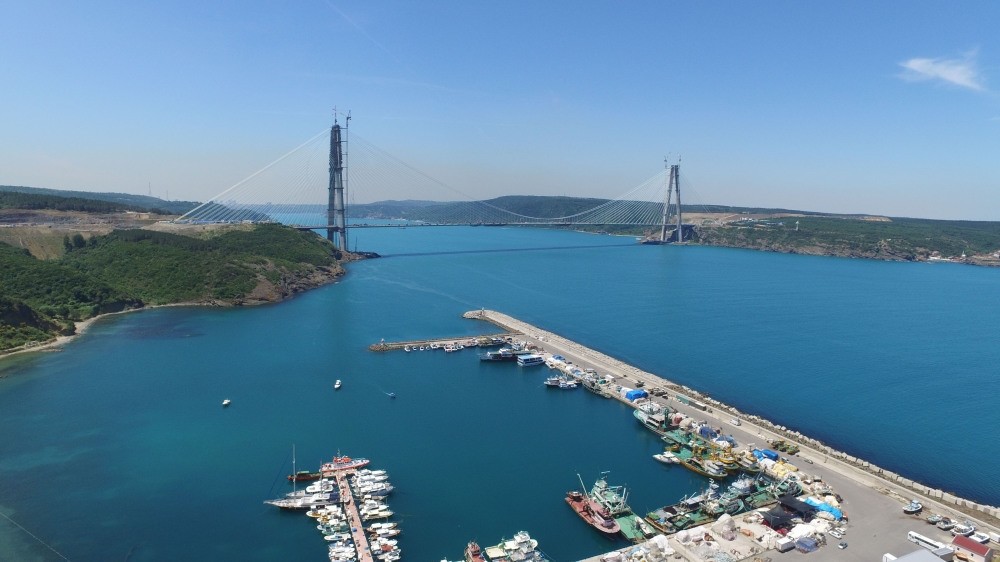 Transport Minister Arslan said within the next seven months, three megaprojects will become operational. The İzmit Bay Bridge will open on June 30, followed by the opening of Istanbul's third bridge on Aug. 26 and the Eurasia Tunnel on Dec. 20

Transport, Maritime Affairs and Communications Minister Ahmet Arslan said the mega projects, which were initiated by Prime Minister Binali Yıldırım while he served as transport minister, are on the verge of completion. Arslan noted that many of Turkey's transport projects, which are under construction, grab attention worldwide, as they are among the world's largest projects.

Three out of these mega projects - Osman Gazi Bridge, Yavuz Sultan Selim Bridge and Eurasia Tunnel - will be put into service by the end of the year. Stressing that they will take Turkey's transport beyond world standards, Arslan said the Eurasia Tunnel, a road tunnel that will connect Asian and European sides of Istanbul under the Bosporus strait, and the Osman Gazi Bridge will make a major contribution to transport in the country.

The Yavuz Sultan Selim Bridge will help ease both domestic road transport and transit transport. After the railway connection is completed, it will help railway transport on an international level.

Arslan stressed that mega projects, which contribute to national economy during the construction period, will make a greater contribution when they are put into service, adding that Turkey has taken major steps in transport and communications thanks to President Recep Tayyip Erdoğan's vision and Yıldırım's pioneering acts. Turkey invested TL 253.5 billion ($85 billion) in the sector to make transport easier for people over the past 14 years.

Arslan further noted that not only Turkey, but the world also, impatiently awaits the completion of the 2,682-meter long Osman Gazi Bridge project, which is the world's fourth-longest suspension bridge with its 252-meter-long towers, 35.93-meter-wide deck and 550-meter-long middle span.

The minister said the Osman Gazi Bridge sets a model in saving time and fuel. The bridge will shorten travel time of nearly two hours around İzmit Bay to four minutes. It will be inaugurated on June 30 with the participation of President Erdoğan and Prime Minister Yıldırım.

Arslan underlined that the Yavuz Sultan Selim, the third Bosporus bridge in Istanbul, is important for world engineering history, because of a number of different features. The bridge will be put into service along with a 215-kilometer-long road including an extension of 95-kilometer road, linking roads and junctions.

Eurasia Tunnel to open on Dec. 20

With the inauguration of the Marmaray, the number of cars passing over the Bosporus bridges has declined by 9 million annually and the Eurasia Tunnel is expected to further alleviate heavy car traffic on bridges. It will shorten travel time of nearly 100 minutes currently to 15 minutes - which means saving 52 million hours and 160 million liters of fuel annually. Arslan stated, "It is a very environment-friendly project that will reduce harmful gas emissions by 82,000 tons every year."

The construction schedule stipulates that the tunnel project must be completed in August 2017, however it will be finished earlier than expected and put into service on Dec. 20.
RELATED TOPICS