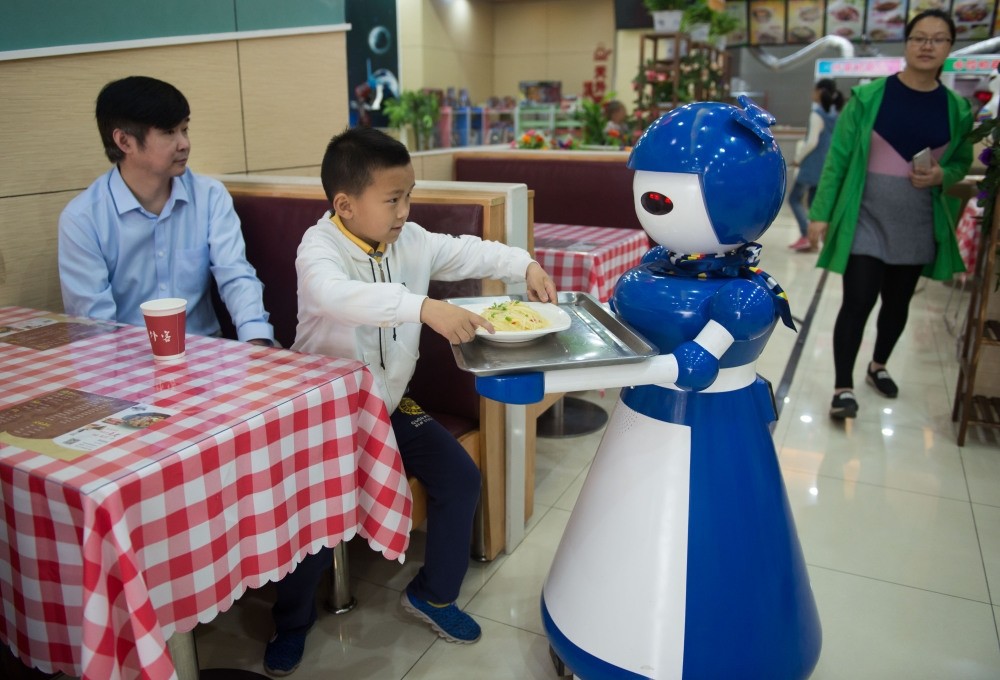 A new cafe in China is running its restaurant with robots as employees. Located in Kunshan, eastern China, the restaurant relies on over a dozen machines for tasks such as greeting customers, waiting on tables and cooking basic meals.
by reuters Jun 23, 2016 12:00 am
Global industrial robot sales growth slowed to 12 percent in 2015 weighed by a sharp fall in top buyer China, data from the International Federation of Robotics (IFR) showed yesterday. The figure was less than half the 29 percent advance seen in 2014 but revised up from a previous IFR estimate of 8 percent due to more data from national associations. Growth in robot sales in China slowed to 17 percent from 56 percent but the country, hungry to automate production as wages rise and still lagging in its robot-worker ratio, still accounted for more than a quarter of the 248,000 robots sold.

"The positive sales figures are being driven by highly automated emerging countries, and by regions that are already highly developed economically," the IFR said. Robot sales more than doubled in Mexico, where the global automotive industry has made large investments in plants to make cars for export to the United States and South America.

The Chinese market is still dominated by foreign robot makers but the IFR said domestic robot makers were making inroads, increasing their market share to 31 percent from 25 percent in 2013. Chinese producers still largely make low- to mid-range industrial robots but are keen to develop their capabilities. Chinese home appliances maker Midea launched a bid last week for German industrial robot maker Kuka. European industrial robot sales rose 10 percent, led by Germany, the IFR said. Sales rose 15 percent in the Americas, although just by 3 percent in the United States. In Asia they rose by 16 percent. South Korea was the world's second-biggest robot market, followed by Japan, the United States and Germany.

The five accounted for three-quarters of all sales of industrial robots. The automotive industry was still the biggest buyer of robots, accounting for more than a third of sales. But growth was just 1 percent. The fastest-growing sectors for robot sales were metal, plastics and rubber, and electronics manufacturing.
RELATED TOPICS