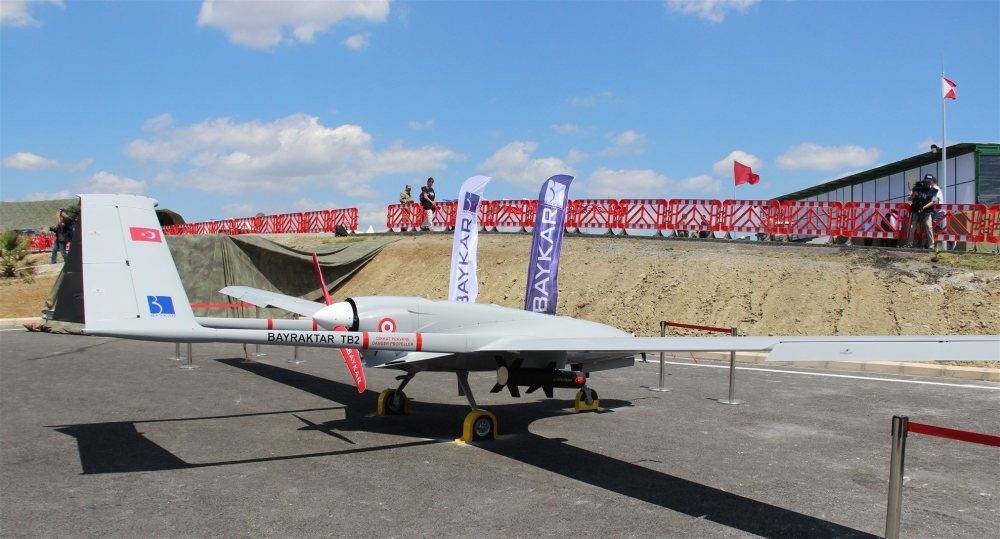 by Daily Sabah Jul 02, 2016 12:00 am
Added to the Turkish Armed Forces' inventory in 2014, the Bayraktar TB2 Tactical Unmanned Aerial Vehicle (UAV) was put into service with the Turkish National Police. Consisting of three UAVs and ground control units, the first system was delivered in June following tests and approval procedures. The second system - whose manufacturing still ongoing - is set for delivery this year, according to the Star daily's Yusuf Akbaba.

The Bayraktar TB2, which is 100 percent Turkish and original, is used in terrorist operations in the country's eastern and southeastern Anatolia regions. It has joined operational assignments over a total of 4,000 hours of flight. The Bayraktar TB2 proved its accuracy during shooting tests made with integrated national missiles in April.

UAVs are the premiere achievements of the Turkish defense industry. They are also force multipliers regarding the fight with terrorism, border protection and national defense power.

Baykar was established by senior mechanical engineer Özdemir Bayraktar in 1984 for manufacturing delicate engine, pumps and gearbox pieces in the localization of the automotive industry and entered a serious research and development process to design and manufacture UAVs and their subsystems in the 2000s locally.

Bakyar Makina initially manufactured a micro UAV for the Turkish Armed Forces (TSK) in 2004 before the Bayraktar TB2 and carried out a weaponized trial, becoming the first national and original micro UAV in the TSK's inventory. The system was used operationally by the TSK in 2007.

The Bayraktar Micro UAV is still actively used by the Turkish Land Forces Command, Special Forces, the Gendarmerie General Command and the Air Force. In addition, it is the first exported national UAV in the history of the Republic, ass it was exported to Qatar in 2012.

The Tactical Unmanned Aerial Vehicle System Development Program was started by the Undersecretariat of Defense Industry based on competition and without any R&D support as a two-stage program in 2009.

Baykar met all the performance criteria targeted during flight trials that took place in the presence of an official committee in 2009 along with Bayraktar Tactical UAV System's Block 1 aerial vehicle platform.

During these tests, Bayraktar UAV's capabilities, such as departure, flight, landing and returning to hangar, were displayed in day and night flights.

In the same period, Heron UAV systems rented from Israel were taking off and landing, remotely controlled by Israeli pilots. After signing a serial manufacturing contract in early 2012, Bayraktar TB2's first delivery was made in November 2014 (six vehicles) followed by a second delivery in June 2015 (also six vehicles). The TSK currently has 12 Bayraktar TB2 UAV systems in its inventory.

The Bayraktar TB2 project has a record-breaking local share with a 93 percent participation rate in the defense industry. It is the first and only UAV system that completed test approval procedures designated by the TSK and the Defense Industry and entered the TSK's inventory.

Critical technologies, such as pitot-static, servo control, power inertial measuring systems that cannot be supplied from abroad or may put the operation in jeopardy by not managing maintenance for various reasons even though supplied, were developed within the framework of the project. In addition, national technologies, such as a three redundant flight control computer and assignment computer that are inconvenient to use due to safety reasons even though supplied from abroad, were developed in the country and used in Bayraktar TB2 UAV's system.

Bayraktar TB2's armament was completed after a 1.5-year operation. Baykar and ROKETSAN kick started the project by taking the initiative without any official support - a first in Turkish aviation history.

Aside from the national rocket launcher system, a national intelligence system was also added to the aerial vehicle. Baykar's R&D unit successfully developed the first signal intelligence device in Turkey with a fully domestic software and hardware system. The BSI-101 Signal Intelligence Device can detect hostile radar and radio locations and destroy targets. In addition, terrorist radio transmissions can be listened to via live stream, and intelligence support can be provided in the fight against terrorism by detecting the enemy's location. Bayraktar reached an altitude of 27,030 feet during a fully loaded flight test on June 14, 2014. It flew for 24 hours, 34 minutes and 4,040 kilometers during a fully loaded flight test Aug. 5-6, reaching an altitude of 18,000 feet. It holds the record in Turkish Aviation history for flight time and altitude for national aerial vehicles.
RELATED TOPICS