Investors pleased with Borsa Istanbul in first half of year 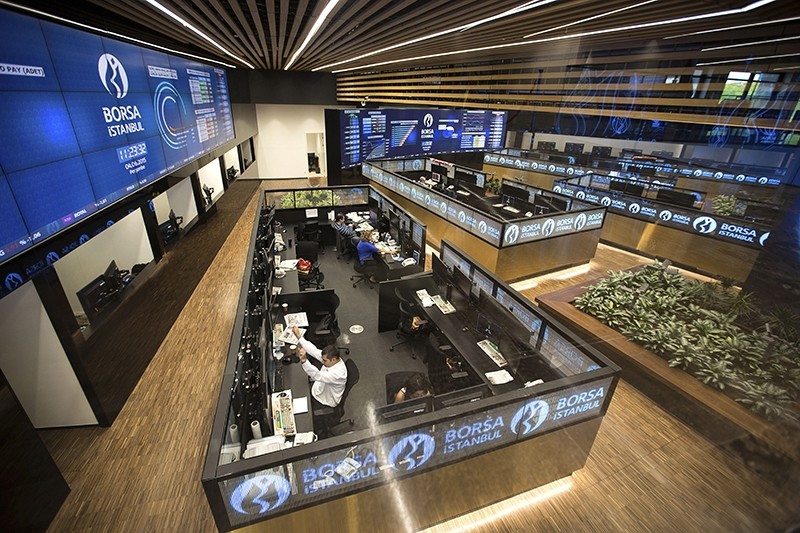 Despite a downward trend over the past two months, the Borsa Istanbul BIST 100 index rose by 7.10 percent in the first half of the year, making investors happy with higher returns compared to the end of last year

The Borsa Istanbul BIST 100 index closed at 76.817 percent in June, marking a 7.10 percent upsurge compared to the end of 2015. Although the index increased up to 87,000 points when foreign exchange rates followed a horizontal trend in the first half of the year, it could not remain at the same level.

The index, which fluctuated due to major domestic and foreign developments in the first half of 2016, went into a decline in May and June after it rallied by nearly 15,000 points in the first four months. With a 10 percent decline over the past two months, it returned the majority of gains. However, it managed to remain a bullish long-term trend.

İş Yatırım Research Director Serhat Gürleyen said the stock exchange performed poorly in 2015 due to negativities reflected in pricing, adding that it followed a positive in the first half of 2016 as positive expectations aligned closer with pricing.

Touching on the fact that Borsa Istanbul overcame major misfortunes in the first half of the year, Gürleyen cited the resignation of Turkey's prime minister and the Federal Reserve's (Fed) possible hike of first quarter interest rates as reasons for the difficulties. "Despite this, the cheap prices that emerged as a result of last year's poor performance became the most important factors in boosting interest in lira-denominated assets," he said. Underlining that BIST 100 looks stronger than MSCI and other stock exchanges in developing countries, Gürleyen said that Borsa Istanbul's report card for the first half of the year is not bad in this regard. He also said Borsa Istanbul traded with a 26 percent discount among its equivalents according to the latest valuations - which helped it remain attractive for investors.

In reference to expectations that the Fed's interest rate hike will be postponed to September 2017 due to the recent developments, Gürleyen stated there are bonds of more than $10 trillion with negative interests all over the world, adding that "In such an environment, demands for stock exchanges in countries like Turkey, where nominal interest rates are high, are continuing."

Main question is the rising reactions to globalization

Gürleyen said the main risk factor for the second half of the year is troubles that will ensue following the U.K.'s secession from the EU, adding that Brexit will have negative impacts on global financial growth. He stressed that the expansionary monetary policies of the Fed and other central banks might reduce such impacts. According to Gürleyen, the main problem is the escalation of reactions to globalization not only in the EU but worldwide. He said that those who voted for Brexit in the U.K. consisted mainly of the elderly and people from the lower-income bracket who suffer from globalization. Gürleyen assessed that non-central political views are gaining strength in many parts of the world because of problems associated with income distribution, expressing that the risk appetite might decline again if reactions from the impoverished middle classes intensify.

Gürleyen further noted that Turkey's steps toward the normalization of relations with Russia and Israel under President Recep Tayyip Erdoğan's leadership can be considered a major and positive development, adding, "As Turkey needs capital from abroad, the Fed and the Bank of Japan's (BoJ) possible expansionary steps cause us to think positively for the second half of the year." Gürleyen stated that BIST 100 is expected to reach 91,000 points in the best case scenario and points between 73,000 and 74,000 will be closely monitored to make purchases. Due to the latest developments, the current year-end estimation of 3.23 for the dollar-lira parity might be revised to reflect the downward trend.

'Stating that the first half of the year was a period of high volatility in terms of both domestic and global markets, Gedik Investments Research Manager Üzeyir Doğan said that harsh fluctuations in global markets have been caused by volatile oil prices, the adoption of negative interest rates by the Bank of Japan (BOJ) and the issue of trust against the European Banking system.

According to Doğan, these shocking developments that emerged at the beginning of the year pushed the Fed, which forayed into interest rate hikes for the first time in 10 years last December, to be more dovish and caused the appetite for global risk to revive, but the real shock to global markets was the Brexit decision. Pointing out that the stressful environment caused by the Cabinet change in the country in May created pressure on the markets along with the terrorist attacks and geopolitical risks, Doğan noted: "The process and continuation of steps being taken to enter a normalization period with the countries with which we face problems related with foreign policy will be crucial in the coming period. Potential deals and projects; especially with Israel and Russia, that will result from the normalization process in the energy, tourism, construction and infrastructure sectors with have a positive effect on both the economy and market values."

'Foreseeing that the volatility and stress could be quite high regarding global markets during the second half of the year, Doğan indicated that Britain's exit process from EU and the U.S presidential elections in November might be potential stress factors for the global markets.

Recalling that the Fed's interest rate decisions would continue to be a determining factor, Doğan continued by saying: "In summary, a half year with a high level of global uncertainties and stress awaits us. We think that that the BIST 100 index could see upward movement during the second half of the year; however, that may be limited due to the risk factors. We maintain our 2016 base-case scenario with 68,000 as the lowest expectation and 92,000 as the highest."

Fenerbahçe's stock decreases in value during the first half of 2016

Fenerbahçe is the only football club that caused lost investors at the Borsa Istanbul Stock Exchange during the first half of the year, while Trabzonspor enjoyed the reverse fate after doubling investments during the same period.

Among the sports companies trading at Borsa Istanbul, Trabzonspor, Beşiktaş and Galatasary made their investors happy during the first half of 2016, but Fenerbahçe's stocks decreased by 3 percent in value compared to their value closing 2015.

Trabzonspor's stocks hit TL 3.3 ($1.10) with a 160 percent increase during the first half of the year, while the Spor Toto Super League's 2015-2016 champions Beşiktaş's stocks increased 61 percent in value, followed by Galatasaray with 46 percent.

Fenerbahçe's share prices rapidly dropped in May after the team lost the championship along with unsuccessful results during the last weeks of the Super League. Even though the team's stocks decreased by 3 percent and closed the first half of the year at TL 36.06, Fenerbahçe preserved its place as "the sports company with the highest market value," at over TL 1 billion.

Considering the total market values of the other sports companies, Beşiktaş took second place at TL 833 million, followed by Galatasary at TL 558 million and Trabzonspor at TL 330 million.