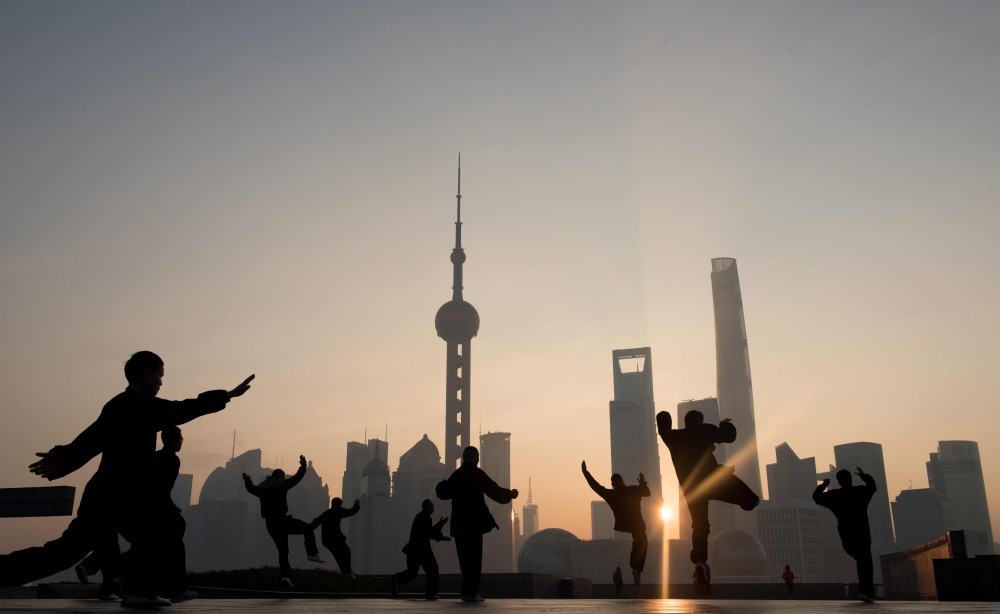 People do morning exercises in front of the skyline of the Lujiazui Financial District in Pudong in Shanghai.
by Jul 11, 2016 12:00 am

Britain's vote to leave the European Union and simmering discontent in other Western countries is seen as hastening the arrival of an 'Asian Century,' analysts say, led by the rise of China and India

By 2050, Asia will account for over half the world's GDP, almost double that of 2011, according to the Asian Development Bank, with 3 billion newly affluent citizens. The EU and other powerful collectives such as the United Nations, NATO, IMF and World Bank hark back to the post-World War II era, with a vision of cooperation leading to peace, prosperity and security. But the churning currents of globalization and institutions' reluctance to reform have left Asian nations feeling that they are not well-represented and looking to form new alliances.

"The old system which kept the West rich and safe is under threat," said Neelam Deo, a former ambassador and director at Gateway House think-tank in Mumbai.

"The British voting to leave the EU in the way they did will impact the old institutions which were set up after World War II and intended to entrench Western power," she said.

Brexit has summoned the specter of a domino-like departure of other members of the EU, pounded by the migrant and euro crises, as well as a fragmenting United Kingdom, should Scotland vote for independence. A resurgent Russia, which is angered by EU- and U.S.-imposed sanctions and has friendly ties with China and India, has hailed the Brexit vote as it looks for cracks to exploit. As the "American Century" got underway after WWII, following imperial Britain before it, China was writhing in the chaos of civil war and colonial India was just gaining independence. Now China is the world's second-largest economy, set to overtake the U.S. in around a decade, while India will be the world's most populous nation by 2022. The IMF named the Chinese renminbi a reserve currency - a main world currency - last November, joining the pound, dollar, euro and yen. Rising economic stars Indonesia and the Philippines are growing at around 5 percent a year, while Europe remains sluggish.

Yet emerging markets argue that IMF voting reforms still don't give them a big enough voice, while India laments its lack of a permanent seat on the UN Security Council. Three centuries ago, before the industrial revolution, Asia was the dominant power, far away from the twin Atlantic centers. With a name that harks back to those days, Beijing's flagship "One Belt, One Road" policy seeks to revive the ancient Silk Road trade route with huge investment from central Asia to Europe. In January China opened the Asian Infrastructure Investment Bank, seen as rivalling the World Bank or the Japan-led Asian Development Bank, seeking to expand its financial clout.

Describing itself as "a bank conceived for the 21st century," AIIB has attracted 57 members including Britain and Australia - with the notable exclusions of the United States and Japan. Asia's growing clout rests on various assumptions, including that nations continue on the same economic trajectory and are not derailed by unforeseen financial crises. Other threats include rising inequality, the middle-income trap - where an economy gets stuck at a certain stage of development - and competition for natural resources.

Tensions between rivals China and India were highlighted in June when Beijing blocked New Delhi's entry to the Nuclear Suppliers Group, a trade group of 48 nations.

"India and China have a fair amount of discontent. Until this is resolved, the Asian Century is going to be very elusive," C. Uday Bhaskar, a leading Indian security analyst told AFP. And the West will vigorously defend itself after Brexit, with U.S. President Obama insisting at a NATO summit Friday that the earthquake will not harm transatlantic unity. World Bank chief Jim Yong Kim used a visit to New Delhi in the aftermath to warn against nations "looking inward." But the US is feeling similar pulls, with presidential candidate Donald Trump playing to a desire to retrench from globalization and immigration by pledging to bring back manufacturing and build a wall with Mexico. Some see a drift back towards sovereign nation states hostile to outside forces - seen in the mantra of "take back control from Brussels" that won the Brexit vote.

"We had this romantic vision to be one world - it is clearly over, nation member states have come back with a vengeance," said Samir Saran, a senior fellow at the Observer Research Foundation in New Delhi.