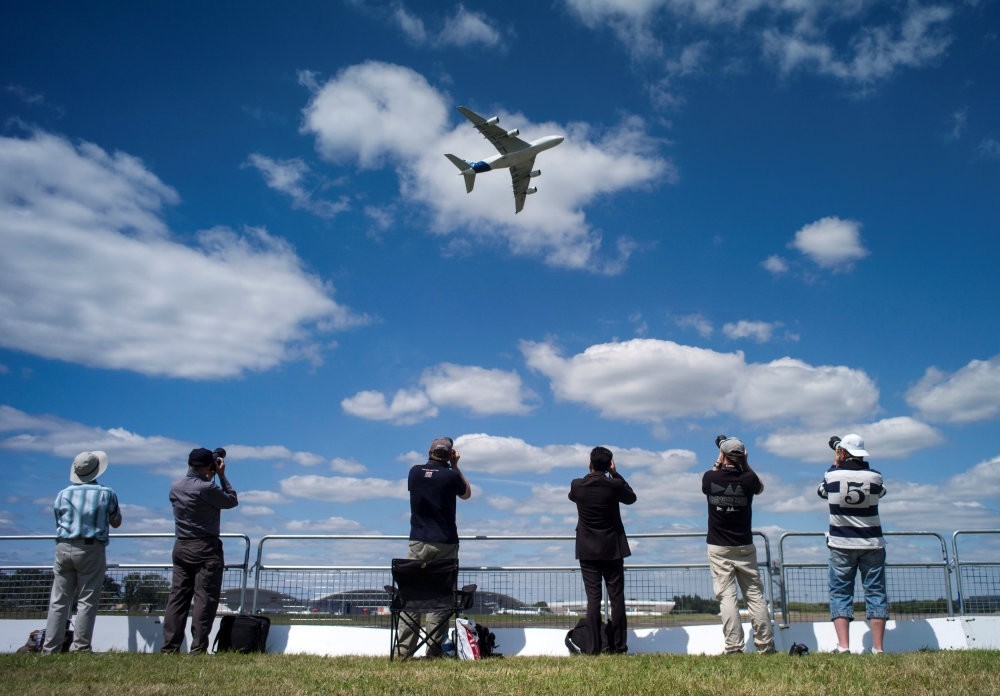 An Airbus A380 aircraft performs a manouvre during its display at the 2014 Farnborough International Airshow in Farnborough, southern England.
by Jul 11, 2016 12:00 am
The aerospace industry is preparing to celebrate major milestones at the Farnborough Airshow next week as Boeing turns 100 and Canada's Bombardier marks the entry into service of a new jet designed to challenge the duopoly of Boeing and Airbus.The July 11-17 event, which alternates with the Paris Airshow as the industry's premier showcase, will see new jets displayed including the world's most expensive warplane, the Lockheed Martin F-35, but is not expected to produce the flood of civil jetliner orders seen in previous years.After a record multi-year sales bonanza for efficient new models, sellers remain on the road drumming up more business for the show. But analysts say many airlines are reluctant to make decisions as doubts over the economy disrupt the traditional self-confidence and big money usually displayed at such events.

"The issue is how do you as a manufacturer survive the ill winds blowing from the outside world," said Richard Aboulafia, vice-president at Virginia-based consultants Teal Group. "It is getting grimmer out there."

Despite the uncertainties - including Britain's shock decision last month to leave the European Union - jetmakers are expected to confirm bullish 20-year outlooks. They face some doubts over key Asian demand, though there could be surprise orders from one or two of the region's low-cost players.

"GDP and traffic growth are pretty positive but there are unknowns," said Eric Bernardini of consultancy AlixPartners.

"If China's slowdown spreads to the rest of Asia, the neighbouring countries suffer and then traffic in Asia could slow and that could lead to deliveries being delayed or halted to some Asian companies."

Already there have been signs of some order deferrals but Airbus and Boeing have plenty of cushion in their backlogs. There are particularly concerns over a possible glut in wide-body aircraft later this decade, while smaller planes are still in demand and are expected to dominate orders at Farnborough.While the latest generation of wide-body jets showcased advances in carbon-fibre airframe construction, the focus of innovation in small ones is led by the engine makers.Airbus so far leads in a fierce market battle triggered by the latest engine upgrades, but delays in engine deliveries from Pratt & Whitney have left some 25 incomplete jets stranded on the ground in Toulouse. The delays mean the A320neo will have to sit out the Farnborough Airshow and will not be parked among rival models that for the first time include the rival Boeing 737 MAX.;Compounding its woes, Airbus was struggling on the eve of the show even to obtain permission for its back-up plan to fly a pair of the hot-selling jets over the Farnborough gathering, following a tightening of formation display rules that also affects Britain's Red Arrows.Hinting at further order announcements, though, an Airbus spokesman said the A320neo would still be "all over the show."

By contrast, Boeing plans to fly its rival 737 model, but faces potentially costly economic questions over the design of the 737 MAX family, which has been outsold by the A320neo. Delegates will be watching for any updates on plans to beef up the smallest version of the MAX and add a larger new version called the 737 MAX 10.

Airbus and Boeing generally split the market for narrowbody jets which generate most of the industry's revenue, and without which they could not afford to invest in bigger planes. That lifeline is increasingly being challenged by new producing nations including Canada, China and Russia. Canadian manufacturer Bombardier CSeries will go into service on Friday, as Boeing celebrates its centenary, but the plane has failed to make a dent so far in sales of the two industry giants.

Doubts are meanwhile increasing over the future of the world's biggest jetliner, the Airbus A380, while Boeing is trying to prop up a struggling fighter jet business. Still, U.S. and European weapons announcements could play a bigger role at this year's show, given the expected drop in commercial orders and higher spending in eastern Europe in the wake of Russia's annexation of Crimea from Ukraine.