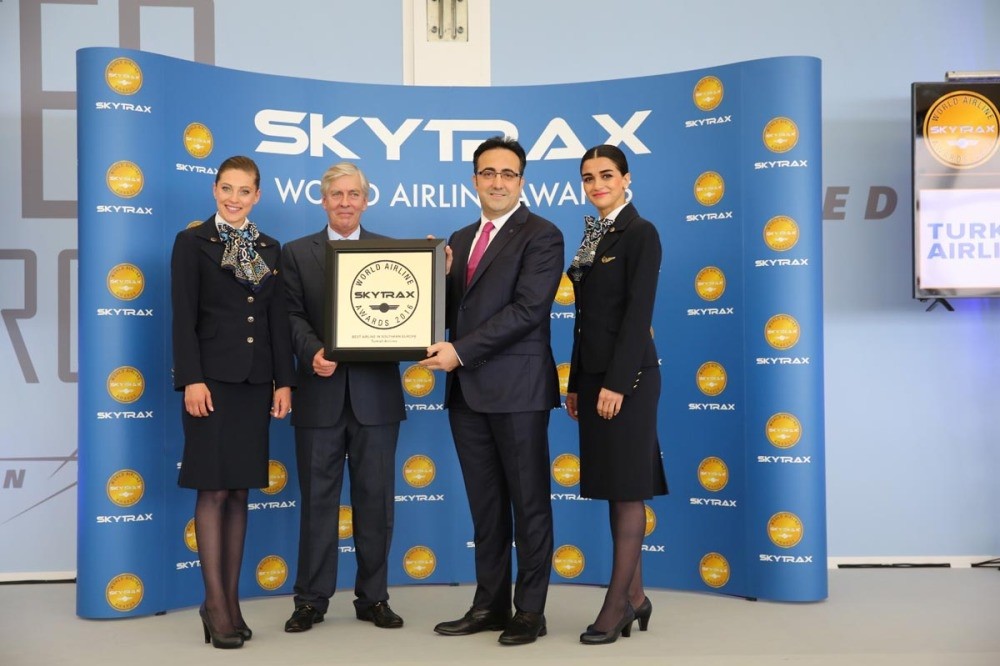 THY Chairman of the Board and the Executive Committee u0130lker Aycu0131 receives the award from Skytrax CEO Edward Plaisted (L) at Tuesdayu2019s ceremony.
by Daily Sabah Jul 13, 2016 12:00 am
Turkish Airlines has been chosen as "Europe's Best Airline" for the sixth year in a row at the 2016 Skytrax World Airlines Awards, which is the most respected global airline passenger survey organization, and is described as the Oscars of the aviation industry at the Farnborough International Airshow in London.

The independent poll assesses traveler feedback, along with key performance indicators such as check-in, arrivals, transfers, shopping, security and immigration right through to departure at the gate.

Regarding the success of the company, M. İlker Aycı, chairman of the board and executive committee, said: "The Skytrax World Airline Awards are the result of the largest airline passenger satisfaction survey in the world. Every year it delights us that millions of travelers again recognize Turkish Airlines as the 'Best Airline in Europe.' The airline continues to be renowned for its seamless services, including our dining and in-flight entertainment experiences. The award marks a continued period of success for us."

Among the airline's goals for the rest of the year, while speaking to journalists last week and stating that the third and last quarter of 2016 would be better, Aycı said they carried 6,500 passengers in the U.S. on a daily basis and their aim was to increase this number to 10,000. He also added that they wanted to increase their recognition level there, saying that they managed to reach out to one third of the U.S. population by participating in Super Bowl advertising.
RELATED TOPICS