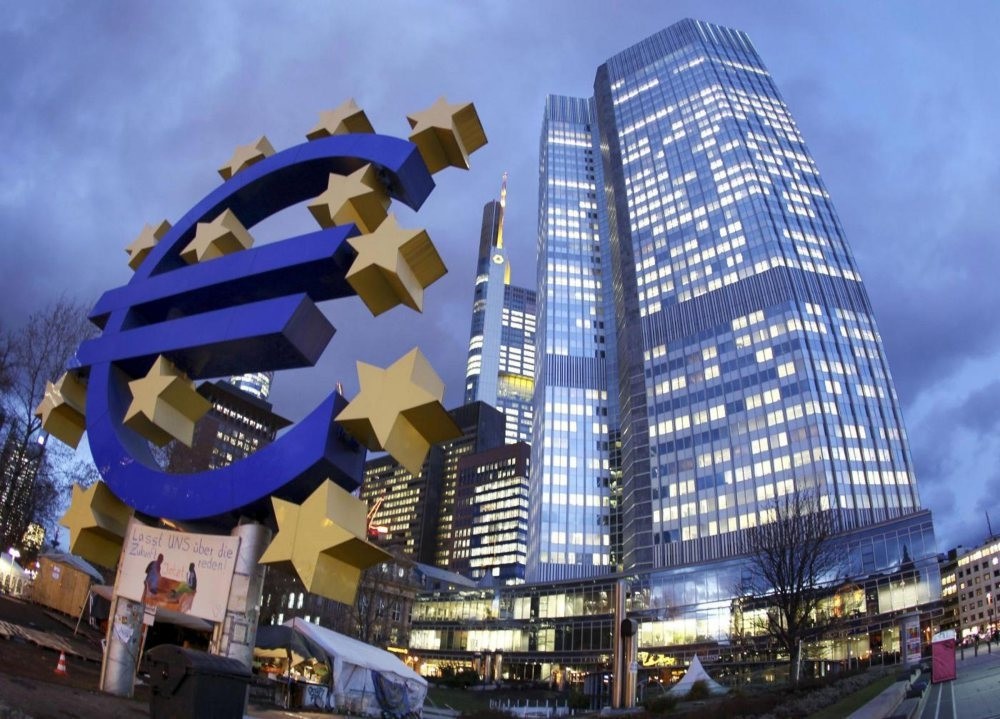 The Euro sculpture stands in front of the European Central Bank (ECB) in Frankfurt. 360 billion euros of non-performing loans in Italy tops the EUu2019s agenda.
by Daily Sabah with AA Jul 21, 2016 12:00 am
The banking crisis in Italy is at the top of the EU's agenda in the wake of the U.K.'s Brexit decision. While systematic problems in Italy's banking sector are at the center of discussions, the primary problem is that the sector is said to have 360 billion euros of non-performing loans. Although Italian Prime Minister Matteo Renzi would like to inject funds totaling 40 billion euros into Italy's banking system, current EU banking regulations do not allow Italy to support its banking sector.

Eurogroup President and Dutch Finance Minister Jeroen Dijsselbloem said that Italian banks did not have much to do about their bad loans, and Italy needed to follow the rules in the banking sector. Dijsselbloem asserts that Italy's troubled banks do not represent an acute crisis.

According to the International Monetary Fund's (IMF) Article IV Consultation Report annual review for Italy, the Italian economy is not expected to return to the production levels seen in 2007 pre-financial crisis until mid-2020, indicating a nearly 20-year loss. The report asserts the recession which has plagued the Italian economy will gradually pull together, and that this roundup was fragile and moderate.

Florian Hense, a European economist at Berenberg, said uncertainties rule the Italian economy and that banks in Italy have been damaged by the weak capital position resulted from non-performing loans on the balance sheets.

Stressing that Renzi wished to inject a fund worth 40 billion euros into the banking system in Italy, which EU banking regulations do not allow, Hense said: "Even though the European Commission and the Italian government reached a settlement for the Italian banks, if the banks and investors suffer a huge loss, it will become impossible for Renzi to win the referendum."

Expecting the Italian referendum to be a tight race, Hense stressed the fact that it would pose a huge risk to both Italy and EU countries if Renzi's government sees losses, and the Five Star Movement wins the referendum.Hense said that the Fed would not increase interest rates before December, due to the uncertainties emerging from the markets in the wake of Brexit. "The referendum in Italy and election results in the U.S. might lead the Fed to delay the interest rate increase to next year, maybe even later," said Hense, adding that the European Central Bank would preserve its current stance and continue with asset purchases after March 2017.

Noting out that the new regulations in the EU regarding the banking sector have frustrated investors, Holmes said that as concerns regarding the Italy-induced crisis have increased, policy makers will find a solution to support the Italian banks, suggesting that the pressure of Italian bank shares on the stock market would not last long.
Last Update: Jul 21, 2016 1:09 am
RELATED TOPICS