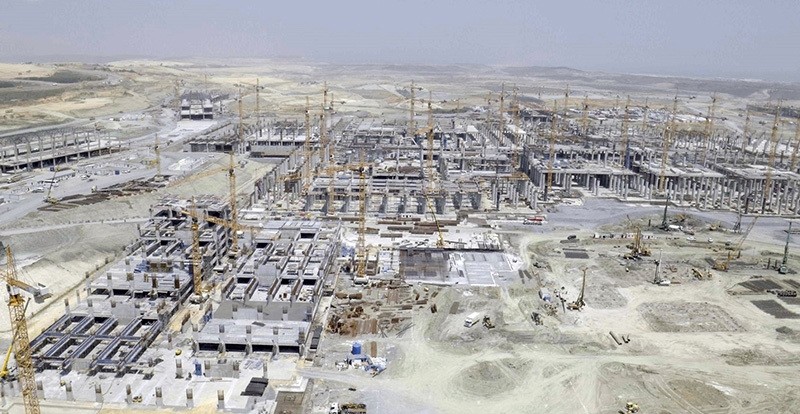 The new airport, which is one of the largest projects in the history of the Republic, will have a capacity of 90 million passengers.

Istanbul Grand Airport (İGA) CEO Yusuf Akçayoğlu said construction work on the airport continued without interruption after the Gülenist coup attempt, adding that this incident bolstered their ambition to work.

According to Akçayoğlu, the fact that Turkey's move toward the achievement of the 2023 vision goals set by President Recep Tayyip Erdoğan troubles "some circles" was more clearly seen after the attempted cup.

He continued that they were motivated more than ever to go to work on the morning that followed the attempted coup, adding, "We uninterruptedly continued our work for 24 hours that weekend." He said that they showed how determined they are to progress the project.

Referring to the fact that the construction work on the first phase was initiated in May 2015, Akçayoğlu said the one-third of the 6 billion-euro loan credit package has been spent on the project so far.

Akçayoğlu also said the pace of construction work has gradually risen, adding that they aim to reach some 5 percent physical speed in summer. Stressing that this pace is crucial for such an enormous project, the İGA CEO said: "Although we have spent one-third of the funds, not all of our fund transfers are immediately reflected in the physical progress."

'If they complete 4 percent to 5 percent of the project each month, Akçayoğlu said that it is highly likely that they will manage to complete the construction of the airport by February 2018 as previously scheduled.

Akçayoğlu said they currently have 17,500 employees, adding that more importance has been given to the work done at night. He said that despite night shifts being unable to achieve the same efficiency as day shifts, by increasing the number of workers, they aim to equalize the progress made during both shifts. Akçayoğlu said the aim is to increase the number of workers every month. At peak points, they foresee worker numbers ranging between 25,000 and 30,000.

The airport spans 11,000 football fields, triple the size of Kadıköy

Airport candidate for recognition by Guinness

Akçayoğlu said the megaproject is a strong candidate for recognition by Guinness, stressing that the third airport is a candidate for the biggest construction yard. He added that the project already holds the title of being the biggest project in terms of operating equipment.