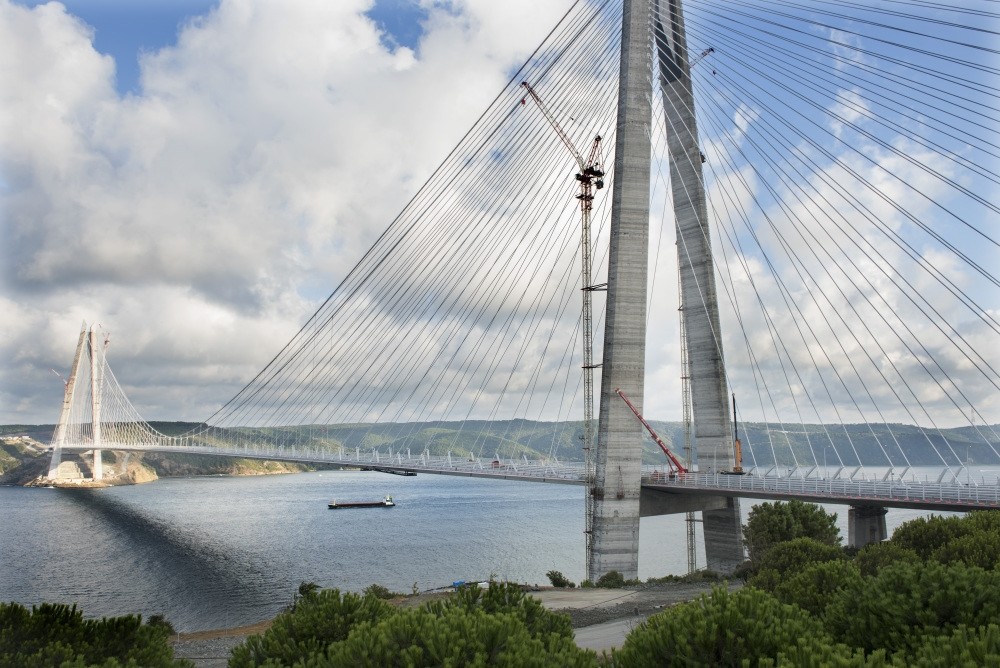 by daily sabah Aug 22, 2016 12:00 am
The Yavuz Sultan Selim Bridge was completed within a record-breaking 27 month time frame, nine months ahead of schedule, according to Transportation, Maritime and Communications Minister Ahmet Arslan. The project, which is worth TL 8.5 billion, is first of its kind completed in such a time frame and could break a world record, according to Arslan.

The minister paid a visit to the construction site of the bridge on Saturday and obtained information from officials about the construction. Speaking to reporters after the briefing, Arslan said the access motorways, spanning 95 kilometers, are the main axis on the highway along with 215 kilometers of access roads which will open on Aug. 26 with President Recep Tayyip Erdoğan in attendance, as well as Parliament speaker İsmail Kahraman, Prime Minister Binali Yıldırım and international guests. Saying that the president, the prime minister and he himself have continued to follow project developments -- including inspections and announcements -- regarding the bridge since day one, Arslan said construction of the bridge has been completed and that finishing touches are now being finalized, including bridge and motorway cleanups and general landscaping. Pointing out that final touches, including the cleanup, will be completed by Tuesday, Arslan said this project, a symbol of pride for Turkey, will be put into full service on Friday, Aug. 26.

Consisting of eight lanes of motorway and two lanes of railway in the middle, the bridge is a first in the world to span a length of 59 meters and feature a tower measuring 322 meters in height, according to the minister.

Continuing by saying that the bridge was constructed in accordance with the build-operate-transfer model without the use of any public resources, Arslan said it would reduce fossil fuel emissions by easing Istanbul's heavy traffic burden as well as environmental problems. Pointing out that the process has been closely monitored by the Ministry of Forestry and Water Affairs and the General Directorate of Forestry, Arslan said nearly 300,000 trees were transferred to other places and 2.5 million trees have already been planted in their place. He also added that 10,000 trees have been planted daily, along with 5.1 million trees which will be planted along the route.

According to Arslan, Turkey has long been used to carrying out megaprojects, and its geostrategic location serves as a transitional line between Europe and Asia which will eventually be an uninterrupted transportation route. The minister said the ultimate goal is to turn Anatolia into a corridor for all types of transportation from Asia to Europe, adding that it will be possible to reach 1.5 million people in the geographic vicinity of Turkey with a three-hour flight. "The trade volume conceived by these people is worth $31 trillion with annual transportation potential worth $75 billion. While conducting these projects, we aim to take our share of the $31 million pie by accomplishing transportation projects [such as the Yavuz Sultan Selim Bridge]," Arslan said.

He also added that preparation efforts already in progress for railways which will start from Akyazı and later connect to Istanbul's third airport via the bridge, as well as the international high-speed rail line going from Halkalı to Kapıkule.
RELATED TOPICS