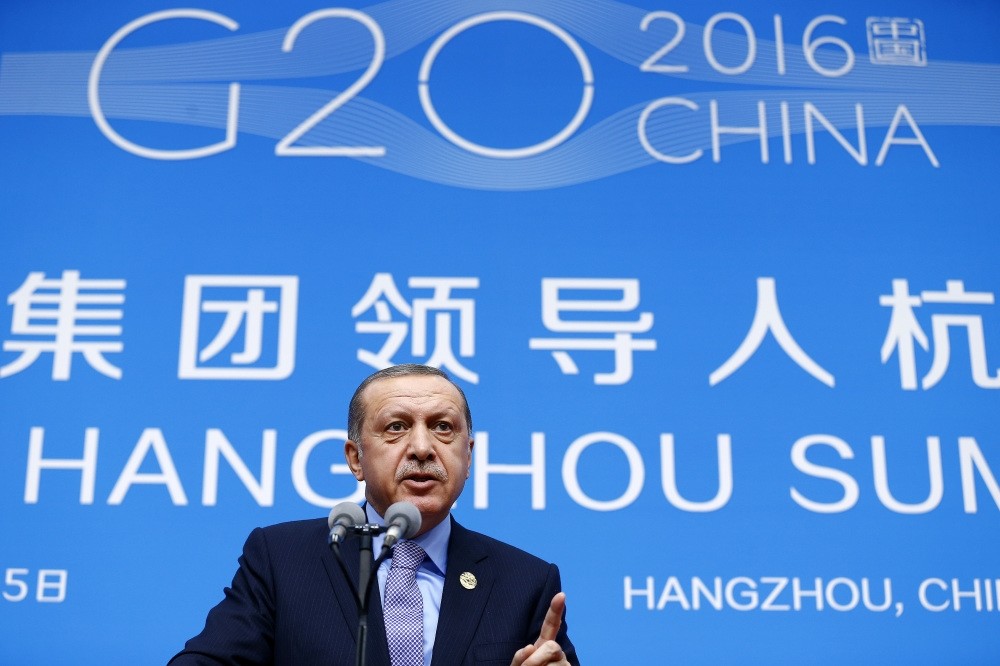 Following his meeting with French President François Hollande, German Chancellor Angela Merkel and Italian Prime Minister Matteo Renzi, President Recep Tayyip Erdoğan stressed that Turkey stands with China in its efforts to launch the Silk Road project on a route that starts in China and ends in the U.K., saying that Turkey's megaprojects such as the subsea tunnel project, Marmaray, and the recent opening of Yavuz Sultan Selim Bridge, Istanbul's third bridge over the Bosporus, are indicators of future megaprojects which include new railway systems and various other megaprojects in line with China's Silk Road project. Erdoğan also reminded that Turkey signed three important energy deals and one agricultural deal with China.

In remarks to the press during the G20 Leaders Summit in Hangzhou, China, Erdoğan spoke about economic matters, saying the leaders mainly spoke about ways to ensure long-term, sustainable economic growth on a global scale by implementing the necessary reforms, with particular emphasis on the importance of developing innovative macroeconomic policies.

In addition, Erdoğan called on developed economies to redesign their development and macroeconomic policies while also taking into account the remaining developing and emerging economies.

Erdoğan also told the press that ways to overcome a sluggish world economy were also addressed as well as strengthening the growth of global trade.

Meanwhile, Economy Minister Nihat Zeybekci spoke in a panel titled "Inclusive and Interconnected Development" as part of the B20 Summit at the G20 summit held in Hangzhou on Sunday.

Suggesting that investments should be increased and new job opportunities created in order to generate stable, powerful and sustainable growth, Zeybekci said trade should be facilitated via both bilateral and multilateral initiatives.

Zeybekci recalled that the issue of inclusiveness was given priority during the G20 summit held in Antalya, Turkey last November, noting that the B20 coalition is an important unifying element that brings together representatives of the business world from G20 economies to address global growth and social development within an institutional framework.

The minister said he is pleased with the fact that Turkey emphasizes inclusivity for growth in order to stay strong in the long term, which was also discussed during this year's G20 Summit.

Zeybekci also noted that the suggestions and recommendations made will contribute significantly to reviving the ultimate aim of the G20 which is strong, sustainable and stable growth.

Stating that international commerce and investments were discussed in B20 this year as one of the important resources of economic growth and employment, Zeybekci said: "International trade is the heart of the global system because it contributes to bringing countries together and improves the world's welfare." Zeybekci further added that trade should be facilitated via both bilateral and multilateral initiatives.

Stressing that global trade and global investment are vital to each other, Zeybekci said it is unacceptable to back international trade on the one hand and complicate investments on the other, or to liberalize investments while also putting obstacles before trade.
RELATED TOPICS