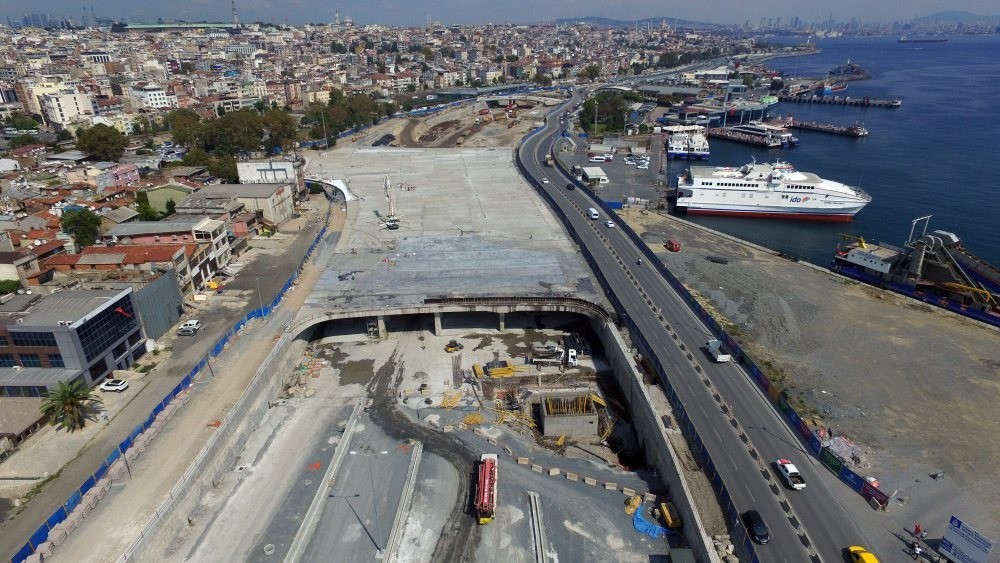 President Erdoğan will drive the first car that will pass through the Eurasia highway Tunnel under the Bosporus Saturday. The $1.2-billion tunnel will be open to the public on Dec 20

One of Turkey's mega projects, the Eurasia Tunnel, which allows automobiles transit access between the Asian and European sides of Istanbul under the Bosporus strait, will be transited by President Recep Tayyip Erdoğan in an official test drive tomorrow. President Erdoğan will drive from Europe to Asia though the tunnel in his official car. The tunnel, which will reduce travel time from 100 minutes to 15 minutes, is planned to be open for public use on Dec. 20. The failed coup attempt orchestrated by the Gülenist Terror Group (FETÖ) that took place on July 15 did not interrupt Turkey's giant projects.

While the Yavuz Sultan Selim Bridge was opened on Aug. 26, the construction of the Eurasia Tunnel connecting both sides of Istanbul continues. The works for the 14.6 kilometer long Eurasia Tunnel, which is being built with the "build-operate-transfer model" under the responsibility of Turkish-Korean joint ATAŞ, continue at full speed.

While the construction of the U-turn in Kazlıçeşme has been completed as a part of the project, the last phase of the underpasses in Yenikapı and Samatya along with the other road constructions continue. Traffic signs showing directions to the tunnel have been placed in the connection roads between Sarayburnu-Kazlıçeşme and Harem-Göztepe. As the intense work continues above the ground, the underground works are being carried out as well. The asphalt work of the Eurasia Tunnel has been finalized.

The Eurasia Tunnel, the construction of which was initiated in 2011 with an investment worth $1.25 billion and is being built 106 meters under the Bosporus, is expected to be used by 100,000 vehicles per day.

Passage fees will be $4 plus VAT and for automobiles and $6 plus VAT for minibuses in one direction in the first year of commissioning. The total length of the tunnel will be 14.5 kilometers, including a 5.4-kilometer section being built under the Bosporus. The tunnel consists of two storeys, both of which have two lines to be used by automobiles and minibuses.

The construction work on the Eurasia highway tunnel has pushed up real estate prices up in nearby districts. Like other mega infrastructure projects in Istanbul, the tunnel is expected to alleviate the heavy traffic load in the city.

A study conducted by the TSKB Real Estate Appraisal company revealed that the project has led to an augmentation of value in real estate prices in nearby districts over the past year, with rental prices rising by 25 percent and sales prices rising by 41 percent. The project has had the greatest impact on the real estate market in the Acıbadem, Koşuyolu, Ünalan, Haşanpaşa and Merdivenköy districts on the Asian side and on the Cankurtaran, Yenikapı and Yedikule and Zeytinburnu districts on the European side. TSKB Real Estate Appraisal General Manager Makbule Yönel Kaya said the project has greater effects on the real estate market on the Asian side than the European side, adding that the Zeytinburnu and Bakırköy coastlines will also increase in value. The price of branded housing projects, which are under construction on the two coastlines, have reached TL 25,000 per square meter. When the ongoing construction work on the Marmaray station, Eurasia tunnel and coastal road is completed, the number of lanes will increase to eight - which will lessen the traffic load.

Stressing that housing prices will rise in the Güngören, Bahçelievler and Merter districts on the European side in the short term, Kaya stated the project will have a positive effect on the transformation of industrial sites into housing and mixed-use projects as a result of urban renewal work in the Merter, Merkezefendi and Davutpaşa districts. He also said the Eurasia tunnel will boost the efficiency of transportation between Istanbul's two airports, adding that the tunnel will allow foreign tourists who do not want to stay in the immediate vicinity of Atatürk Airport to go to the Asian side easily.

The existing undersea road of nearly 5.4 kilometers, including 2x3 and 3x2 lanes, will be expanded to 2x4 lanes. Two bridge crossings and a pedestrian overpass, which will also serve the disabled, will be built on the D100 highway. The existing road of nearly 3.8 kilometers will be expanded to 2x4 and 2x5 lanes from 2x3 and 2x4 lanes.
RELATED TOPICS