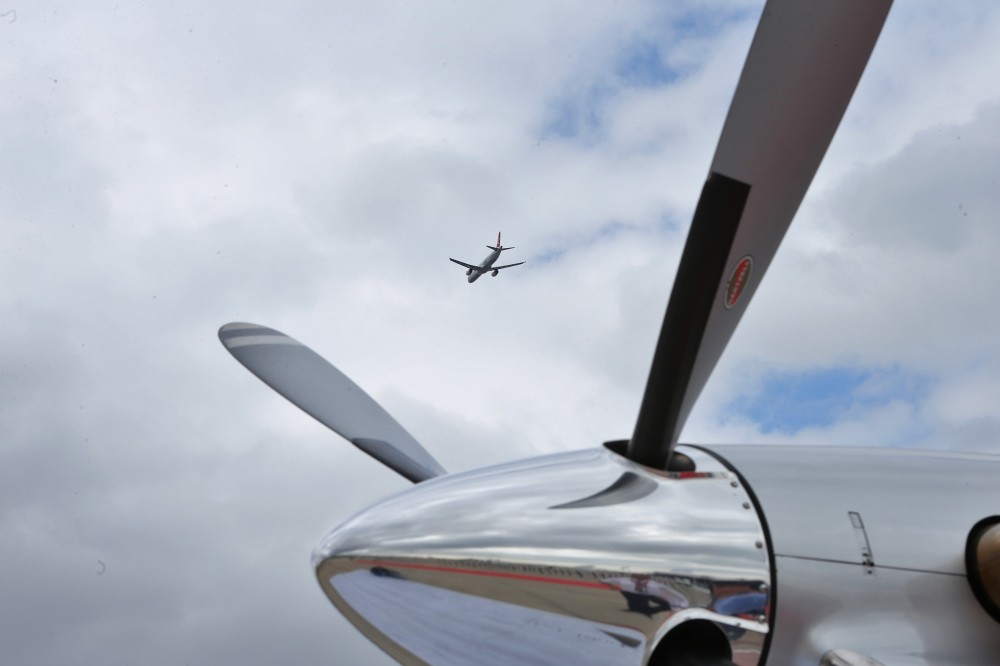 by Daily Sabah Oct 07, 2016 12:00 am
The biggest civil aviation fair in the region, the 11th International Civil Aviation and Airports Exhibition and Aviation Industry Supply Chain Platform 2016 has kicked off at Atatürk Airport's General Aviation Apron. The Istanbul Airshow, which will display national design aircrafts and domestically manufactured helicopters, will stay open for visitors until Oct. 9.

Speaking at the fair's opening ceremony, THY Chairman İlker Aycı said behind THY's recent success lies the company's stable management lasting over 13 years. He stressed that the airports and transportation axis constructed in Turkey has strengthened infrastructure.

Noting that THY is Turkey's flag-bearer, Aycı touched upon the important steps Turkey has recently taken in the civil aviation and defense sectors.

Promising that they will provide the best possible support for the third airport project, which will take Turkey's aviation sector to another level, Aycı said successful operations are being carried out in a "tough period." "We should not be upset about the number of attendees or aircrafts. We move forward by turning crises into opportunities. Aviation is one of the few sectors making the crisis count," Aycı said, suggesting that in 2017, they will go forward with new breakthroughs that will surpass the former achievements.

TAV Airports Chairman Şener pointed out that the fair has also improved along with the Turkish aviation sector, and highlighted Turkey's substantial breakthroughs in international civil aviation. Şener stressed that Turkey's council membership for the International Civil Aviation Organization (ICAO) is a very important development.

Mint Fuarcılık General Manager Feyzan Erel said with the activation of the third airport, the current fair infrastructure will get stronger. "The Istanbul Airshow will move forward with the breakthroughs of our national aviation sector," Erel said.

Following the speeches, Minister Arslan and his company opened the fair. Depicted as the biggest aviation event in the region and held biyearly since 1996, the Istanbul Airshow hosts executives from national and international firms, and the world's prominent aircraft and engine manufacturers. Some 162 companies from 38 countries are attending.

Known as domestic commercial aircraft, the TRJ328 series will be introduced for the first time at the fair, which also features the HÜRKUŞ (free bird), a trainer aircraft designed by engineers from the Turkish Aerospace Industry Inc. (TUSAŞ/TAI).
RELATED TOPICS