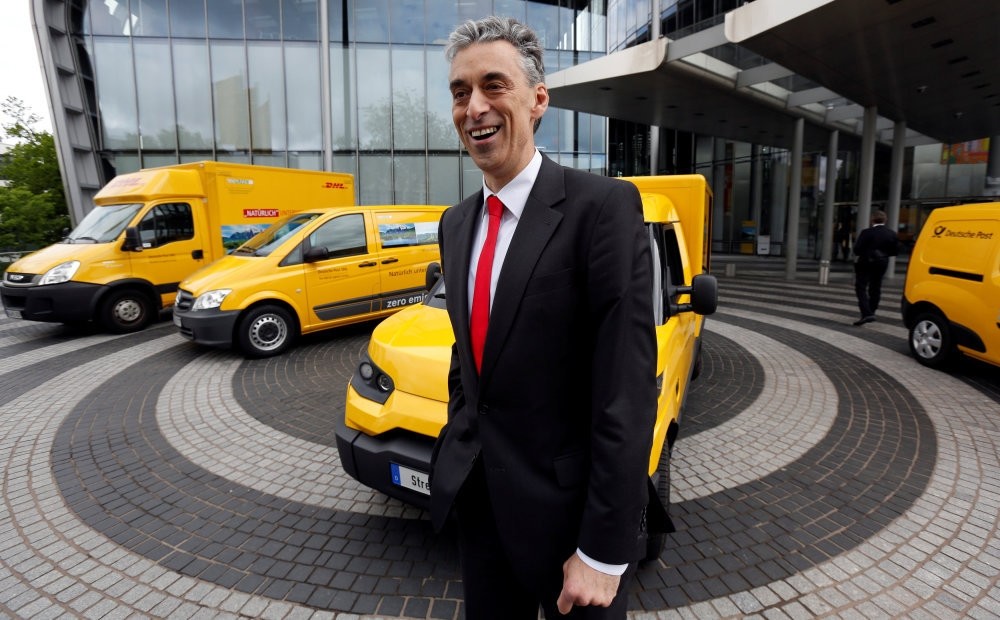 Frank Appel, CEO of German postal and logistics group Deutsche Post DHL poses in front of a StreetScooter e-car and other e-cars in Bonn.
by Oct 08, 2016 12:00 am
German logistics giant Deutsche Post has quietly designed and made its own electric delivery van, exploiting sweeping changes in manufacturing technology which could upend the established order in the auto industry. For the moment, Deutsche Post is using the vehicles itself to meet growing demand for e-commerce deliveries without adding to air pollution in German cities, replacing conventional Volkswagen vans. But having decided to go it alone with the project - upsetting VW "beyond measure" - the group will soon decide whether to start selling the Streetscooter model and join those set to compete directly with established carmakers.

Advances in manufacturing software are allowing the likes of Deutsche Post, Google and start-ups to tap suppliers to design, engineer and test new vehicle concepts without hiring thousands

of engineering staff or investing billions in tooling and factories. Technical and engineering know-how among this network of suppliers has blossomed since traditional manufacturers began farming out research and development to keep their own costs down after the global financial crisis of 2008-09. Today, suppliers produce components which make up 80 percent

of a car, up from about 56 percent in the 1980s, creating a manufacturing system which is being used by new entrants such as Google for its driverless cars. Deutsche Post says it took this route when the conventional vehicle makers turned down requests to build the electric vans in what are limited numbers by their standards.

"We are purposely not reinventing the wheel. We do not produce a single component ourselves. Everything comes from a supplier," Win Neidlinger, director of business development at Deutsche Post's carmaking arm Streetscooter GmbH, told Reuters. Deutsche Post already has 1,000 of the bright yellow vans on the road, and production has been raised to 5,000 vehicles a year, with the possibility of adding a second shift. Streetscooter used a software program made by PTC to talk to a network of 80 suppliers including Stuttgart-based Bosch, which provides the electric drivetrain, and Hella which makes the headlights.