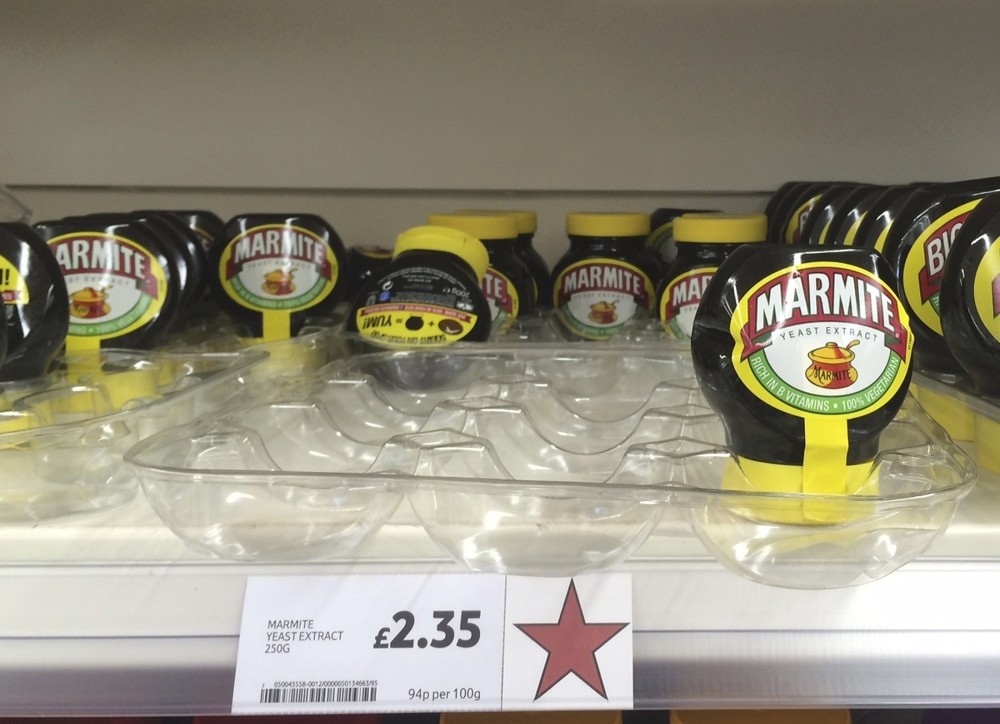 Jars of Marmite, a brand of Unilever, are displayed for sale on a shelf at a Tesco supermarket in Basildon, Britain.
by Oct 14, 2016 12:00 am
Britain's biggest retailer Tesco pulled Unilever goods such as Marmite from its website in a pricing row sparked by the Brexit-induced plunge in the pound, one of the most vivid signs to date of how leaving the EU could hurt consumers. The dispute between Tesco and one of the world's biggest consumer goods companies means popular products such as Persil washing powder, PG Tips tea bags and Ben & Jerry's ice cream are not currently available on Tesco's website, the country's largest online grocer.

The June 23 vote took many investors and chief executives by surprise, triggering the deepest political and financial turmoil in Britain since World War Two and the biggest ever one-day fall in sterling against the dollar. The pound is down 19 percent against the U.S. currency and down 16 percent against the euro, forcing suppliers and retailers to battle for profits as imported goods get more expensive. Now that fight could be hitting supermarket shelves.

Bernstein analyst Bruno Monteyne, a former senior Tesco supply chain executive, said Tesco has typically one to two weeks' stock. "While politicians can deny reality, a shampoo produced on the continent is now 17 percent more expensive," he said. "This isn't about Tesco or Unilever but about all UK retailers and suppliers."

Shares in both firms were down more than 2 percent. Shortages of some of Britain's best loved brands such as Marmite, a brown yeast-extract spread, would be a clear illustration for consumers of the turbulence unleashed by the Brexit vote.

Separately, high street favourite WH Smith Plc also said it will lose its protection against a weaker pound next year and was looking to offset the impact by consolidating factories and negotiating better prices with suppliers to cut costs. "If people are worried about losing Marmite from Tesco, wait until they find out about jobs...," said Wes Streeting, a lawmaker from the opposition Labour Party who backed Remain.

The battle between the two giants reflects the tensions building throughout the system, with Tesco the one retailer big enough to push back against Unilever's demands and Unilever one of the only suppliers powerful enough to stand its ground. The standoff dominated the news in Britain on Thursday, with "Marmitegate" trending on Twitter and "Marmite Wars" splashed on the front pages. The Daily Mail dubbed it "Brexit Blackmail".

An executive at a rival consumer goods company that has not pushed for UK price increases said it was "absolutely brilliant positioning" by Tesco.

Two other people familiar with the situation said Unilever had been trying to raise the prices it charges Britain's big four supermarkets - Tesco, Sainsbury's, Asda and Morrisons - across a wide range of goods by about 10 percent.

One said no other big consumer goods company had been as aggressive as Unilever on price demands while the second source said they had protested against Unilever's demands as some of the products were actually made in Britain. The sources said two of the big four were still weighing whether to accept the price rises or scrap some products. "What's really a problem is when a supplier like Unilever comes and asks for across the board cost increases and there's no negotiation, there's no discussion. That's been the approach that's upset the grocers," the second source said.

Unilever has declined to comment on the specifics of the row but its Chief Financial Officer Graeme Pitkethly said on Thursday that price increases were the normal response to a devaluation, adding that the scope of the increases was "substantially less" than what was needed to cover the hit. "We are confident that this situation will be resolved pretty quickly," he said.

Tesco said it was currently experiencing availability issues on a number of Unilever products. "We always work to ensure customers get the best possible prices and we hope to have this issue resolved soon," a Tesco spokesman said.

Tesco is in the process of rebuilding itself after a 2014 scandal when it admitted overstating profits and pressuring its suppliers into driving down prices.

Last week, Tesco boss Dave Lewis, a former senior Unilever executive, hailed a transformed relationship with suppliers as a major factor in the grocer reporting a 60 percent rise in first-half profit. But he indicated it was not a given that suppliers should be able to recoup the cost of the falling pound as they had not always passed on benefits when sterling was much stronger. Most analysts and economists believe the slump will lead to higher grocery prices, following years of deflation due to a price war between the big chains. A poll taken by Britain's Food and Drink Federation (FDF) between Sept. 16 and Oct. 7 showed three-quarters of British food manufacturers had seen an increase in the price of imported ingredients since the vote, and 63 percent reported a decrease in profit margin.