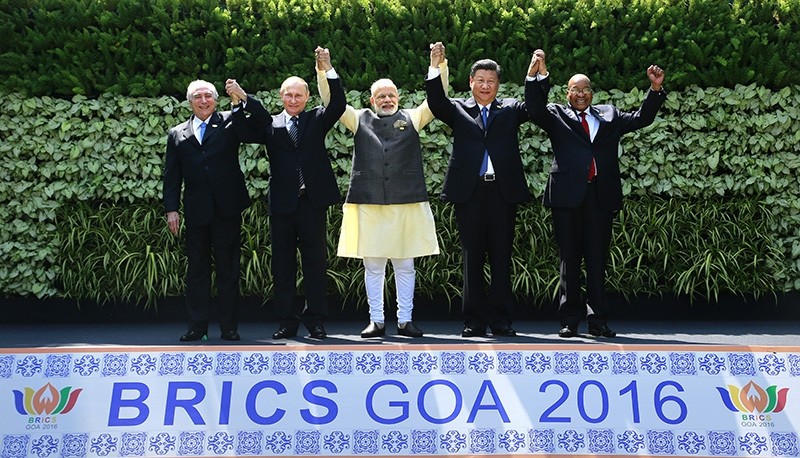 The leaders of five of the world's fast-rising powers were meeting Sunday in the southwestern Indian state of Goa for their annual summit at a time when their ability to shape the global dialogue on international politics and finance is increasingly being questioned.

Brazil, Russia, India, China and South Africa, or BRICS, face the tough task of asserting their growing influence as a power group even as they bridge their own trade rivalries to help grow their economies.

The group represents nearly half of the world's population and a quarter of its economy at $16.6 trillion. But BRICS are battling the economic slowdown and politically each member wants the others to support its policies — Russia on Syria, China on the South China Sea and India on its fight against terrorism.

The economic clout of the group has flagged in recent years with the slowdown.

In Russia, the decline in global oil and commodity prices coupled with biting Western sanctions have dealt a blow to the economy. The Chinese economy has slowed to its slowest pace in 25 years, although its 7 percent growth rate still places it among the fastest growing global economies.

South African remains caught in severe economic turmoil with the country's credit rating at risk of being downgraded to junk by year-end.

Brazil is only just emerging from months of the worst economic recession it has seen since the 1930s, a situation that was further worsened by recent political turmoil.

India, although the fastest growing country in the world at 7.5 percent annually, is grappling with widespread poverty and the challenge of strikes against militants in Kashmir.

When they sit down to talk, the leaders will attempt to push their own interests.

China, looking to expand access for Chinese goods, is keen that the BRICS adopt a free trade agreement that would open up their markets further. But the other members of the group, already burdened by cheap Chinese imports and huge trade deficits with Beijing, could shoot down any such proposal.

India would be looking at getting support for a strongly worded statement on global terrorism stemming from its own concerns about militants crossing the border from Pakistan into Indian-controlled Kashmir.

Other proposals that could find favor would be measures to promote business, such as easing visa regimes to allow long-term, multiple entry visas to business leaders.

The BRICS leaders could also push for more investments from China, especially in funding infrastructure projects, something that other BRICS countries are seeking. In this context, the group may decide to speed up disbursal of infrastructure financing through the New Development Bank that the BRICS countries set up in 2014 as an alternative to the International Monetary Fund.

The leaders are expected to push through a decision to create their own credit rating agency, one which they feel would treat developing countries more fairly, unlike the existing three main rating agencies that traditionally favor Western economies.

Another key outcome would be the setting up of a think tank to provide new ideas on multilateral funding to help shift the global dialogue on international finance.