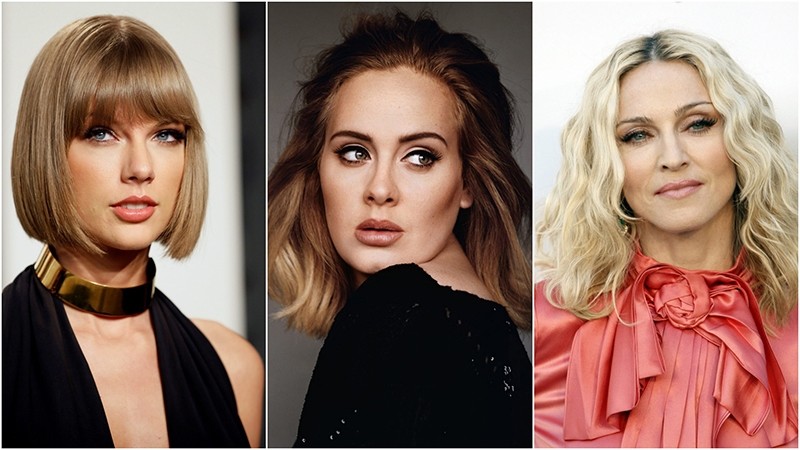 Swift, 26, smashed the Rolling Stones' North American touring record, pulling in a total of more than $200 million on the North American portion of her "1989" world tour. Last year, the "Bad Blood" singer came in second to Katy Perry with an estimated $80 million.

Swift was honored with the first-ever "Taylor Swift Award" at the BMI Pop Awards in May, quipping that she "would be kind of bummed" if the award had gone to someone else.

British "Hello" singer Adele, 28, ranked second on Forbes' list with $80.5 million in earnings, her highest total yet. Adele, whose album "25" swiftly became the biggest seller of 2015, enjoyed continued success with album sales this year and grossed millions per night for her arena shows.

Madonna, who was named the highest-paid woman in music in 2013, ranked third this year. Her recent "Rebel Heart" tour grossed $170 million, bringing her career total on the road to $1.4 billion pretax, according to the magazine.

In the past 12 months, Madonna, 58, earned a total of $76.5 million. That was slightly more than Barbados-born Rihanna, who earned $75 million and also received a lifetime achievement award at the MTV Video Music Awards on Aug. 28.

Collectively, the 10 women on Forbes' list earned more than $600 million this year.

Forbes compiled the list after estimating pretax income for the 12 months from June 2015 to 2016 based on interviews with managers, agents, lawyers and some of the stars. It also looked at data from the Pollstar, the Recording Industry Association of America and tracking firm Nielsen SoundScan.