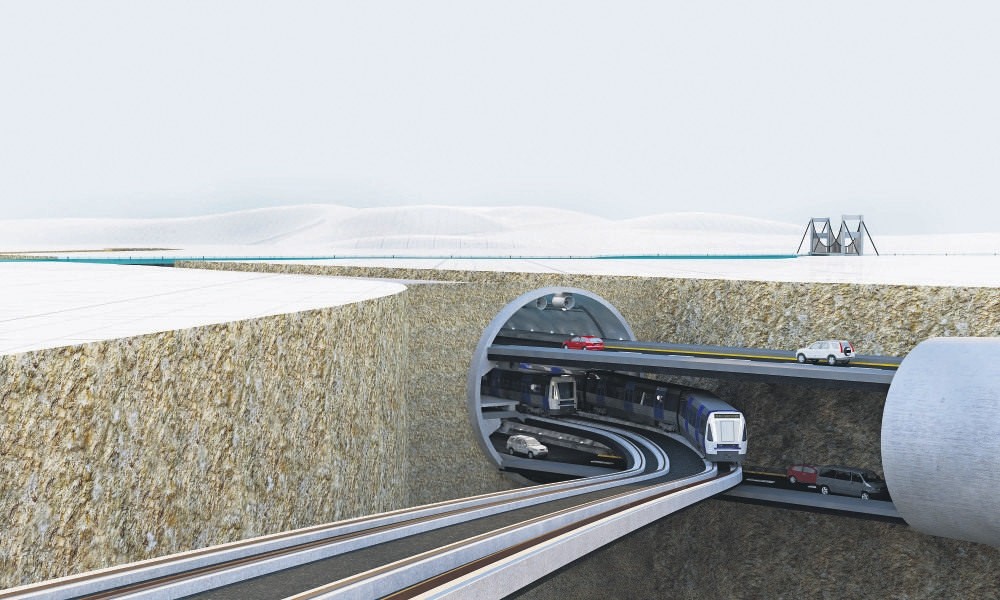 by Hasan Ay Nov 15, 2016 12:00 am
With the opening of the Eurasia Tunnel, built for wheeled vehicles under the Bosporus only a few days away, major steps are being taken toward another mega project, the three-level Istanbul tunnel consisting of a dual highway and metro line which will be put to tender on Nov. 30.

After the original tender was cancelled last year due to low turnout, the Infrastructural Investments Directorate of the Ministry of Transportation, Maritime and Communication will hold the tender at the end of November for the ground work and engineering. The projects are slated for completion within one year.

Tunnel to include metro line and dual highway

The first stage of the tunnel project includes a "high-capacity, fast metro system" which will begin from the İncirli district on the axis aligned with the E-5 highway on the European side and stretch to Söğütlüçeşme on the Asian side. Completion of the metro line coupled with the dual highway in the tunnel's mid-section will be followed by the "highway tunnel" stage of the project, which will include construction of two-by-two highway lanes that will begin at the Hasdal junction on the TEM highway and stretch to the Çamlık junction on the Anatolian Side. The tunnel is expected to decrease traffic congestion on the Fatih Sultan Mehmet Bridge.

The decision was made to construct the tunnel under the Bosporus rather than over it, in efforts to preserve Istanbul's pristine skyline. The project reduces the need for multiple tunnels by combining the metro line and dual highways and, according to the plan, will be connected to the TEM highway and the North Marmara highways via nine metro lines.

When the project is fully operational it is expected to reduce the commute time for passengers, allowing commuters to travel from İncirli on the European side to Söğütlüçeşme on the Asian side in approximately 40 minutes. Vehicles will be able to travel from the Hasdal junction on the European side to the Çamlık junction on the Anatolian side in just 14 minutes. The project will integrate multiple urban train systems running from Istanbul's European side to Asia and is projected to accommodate 6.5 million passengers a day.

A special project will be conducted for the section of metro line that will run across Haliç. The possibility of using an immersed-tube method, which was previously used in the Marmaray project, will be tested for the metro's Haliç passage. Ground and sea conditions in the area will be assessed in detail and requirements for construction will be determined. The project will likely use the build-operate-transfer model, while economic and financial analyses for the project will be conducted in the coming weeks.
RELATED TOPICS