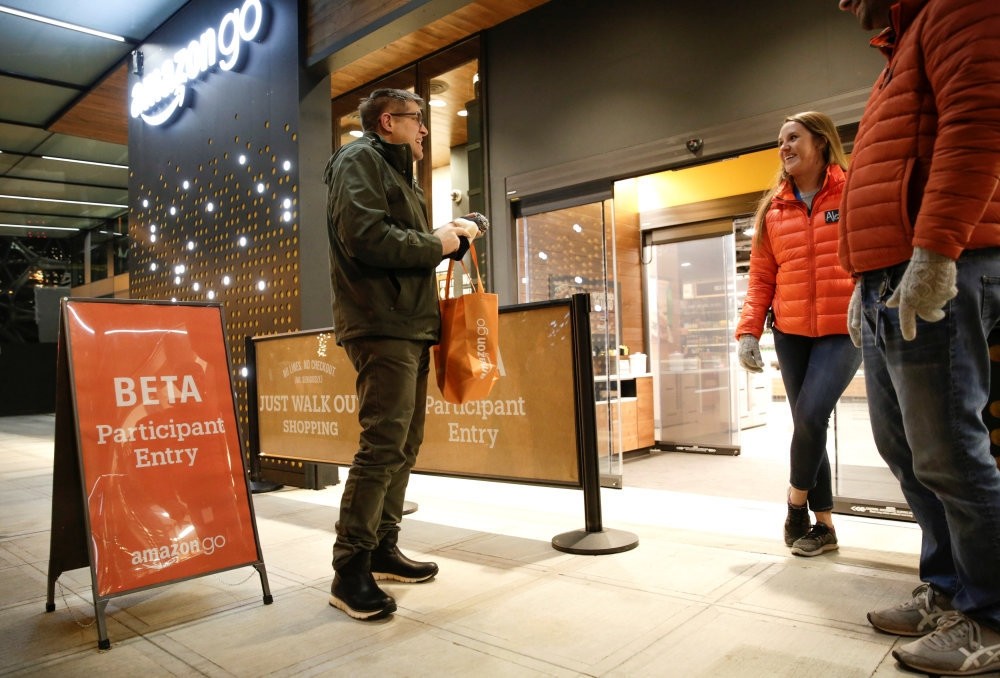 Amazon employees are pictured outside the Amazon Go brick-and-mortar grocery store without lines or checkout counters, in Seattle Washington.
by Dec 07, 2016 12:00 am

Online retail giant is testing a new type of physical store in the U.S. that promises no lines or checkouts for shoppers who have an Amazon account, a supported smartphone and the required app


Amazon has unveiled a new kind of retail store, with no cashiers. Customers at the concept store in Amazon's hometown of Seattle, Washington, can fill their shopping carts and walk out - with the costs automatically tallied up and billed to their accounts with the U.S. online giant.

Amazon Go, which is being tested with Amazon employees and will open to the public next year, is a "checkout-free shopping experience made possible by the same types of technologies used in self-driving cars: computer vision, sensor fusion and deep learning," its webpage said.

"Our Just Walk Out technology automatically detects when products are taken from or returned to the shelves and keeps track of them in a virtual cart. When you're done shopping, you can just leave the store. Shortly after, we'll charge your Amazon account and send you a receipt."

The 1,800-square-foot store is selling a variety of food products, including bread, cheeses and ready-to-eat meals, as well as Amazon Meal Kits, which contain ingredients for home-cooked dishes.

It was not immediately clear whether Amazon will expand this model with more physical stores or offer the technology to other retailers.

The online giant has been rumored to be looking at creating brick-and-mortar stores but so far has only announced a handful of outlets selling books.

The Wall Street Journal cited people close to the matter as saying that Amazon Go was one of several store formats the retail giant is considering.

Two prototype drive-through locations in Seattle without in-store shopping options are set to open in the coming weeks, the Journal reported.

Depending on the success of the test locations, Amazon could reportedly open more than 2,000 brick-and-mortar grocery stores under its brand.

If it does push forward with selling fresh food in stores, Amazon could put a lot of pressure on traditional grocers and superstores like Wal-Mart.

A video posted to YouTube on Monday shows Amazon Go shoppers using a mobile phone app to enter the store, then pulling items from shelves and adding them straight to their bags. Items picked up are tallied automatically in a virtual shopping cart, according to the video. The technology even updates if an item is placed back on the shelf, according to the video.

Amazon opened its first physical store, Amazon Books, a year ago in Seattle. The company now has bookshops in San Diego and Portland, Oregon, with locations expected soon in Chicago and just outside Boston.
Last Update: Dec 07, 2016 10:44 am
RELATED TOPICS