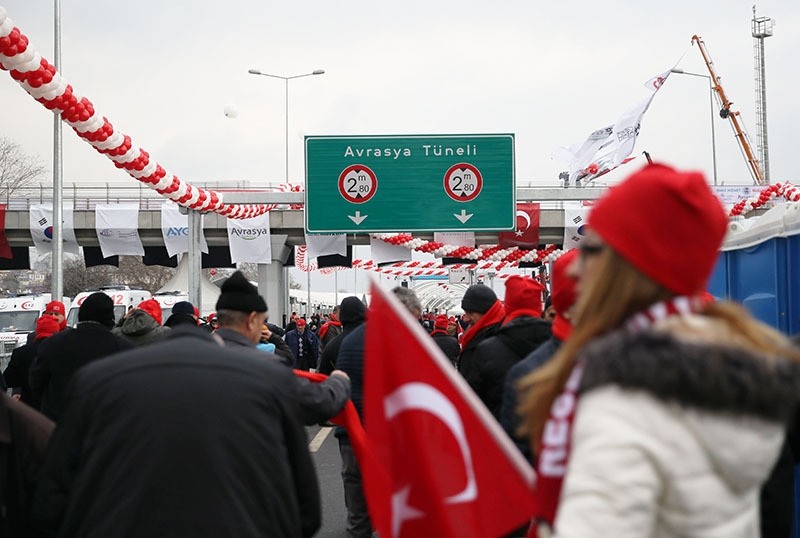 The Eurasia Tunnel, connecting the Asian and European continents underneath the Marmara seabed, was inaugurated with the presence of Turkish leaders and many other foreign guests in attendance on Tuesday.

Despite treacherous attacks against Turkey, particularly the failed coup attempt of July 15, which not only targeted the democracy, constitutional order and the Turkish nation, but also the economic development and advancement of the country, Turkey has not yielded and continues to successfully accomplish its mega projects at full speed. During their speeches at the opening ceremony both Erdoğan and Yıldırım condemned such attacks targeting the unity and prosperity of Turkey and declared that no malignant powers can stop Turkey from growing and developing.

TL 15 until the New Year

Speaking at the opening ceremony, President Erdoğan said the Eurasia Tunnel has been built over the course of four years, stating that he is confident that this work, which received many awards at the project and construction stages, will secure more interest. Pointing out the advantages of the tunnel, he said, "We are now leaving behind such news reporting the ferry trips are cancelled because of the weather. The Eurasia Tunnel allows people to transit between the European and Asian sides without the effect of weather conditions." The charge to pass through the tunnel will be TL 15 ($4.25) until the new year, with the fees collected to be deposited into an account for the families of martyrs and veterans opened by the Ministry of Family and Social Policies. Erdoğan also said that no public funds were used in financing Eurasia Tunnel, and the state treasury will gain 180 million Turkish liras per year for 25 years to come.

Prime Minister Yıldırım, also speaking at the opening ceremony, indicated that the Eurasia Tunnel was one of their greatest dreams, following the realization of such projects as the Marmaray, an undersea train linking the European and Asian sides that opened in October 2013, the Yavuz Sultan Selim Bridge, Istanbul's third Bosporus bridge which opened on Aug. 26, and the Osman Gazi Bridge, which is the largest section of the Gebze-Orhangazi-İzmir Highway Project, and the world's fourth-longest suspension bridge with the largest central span, which opened last June. Yıldırım, stressing that they have built 19,000 kilometers (11,806 miles) of roads in addition to the previous 6,000 km in 14 years, said that 76 provinces have been connected by divided routes, compared with the number which 14 years ago was only six. "We have renewed our 156-year-old railway network. We have doubled the number of airports. The name of the country that is constructing one of the biggest airports in the world today is Turkey. I hope that the new airport will be commissioned by Feb. 26, 2018," Prime Minister Yıldırım said during his speech.

Providing information about the Eurasia Tunnel project, Yıldırım said: "When Fatih Sultan Mehmet the Conqueror was conquering Istanbul, the ships were carried over the land. Today, his grandchildren, Recep Tayyip Erdoğan and his friends are passing cars and trains under the sea. Today we are opening the deepest tunnel in the world, which is located 106.5 meters under the sea. The tunnel will ease traffic congestion and around 120,000 vehicles will pass through this tunnel daily. With the start of service, the fuel savings will reach TL 160 trillion. It was made to be environmentally responsive, fast, safe, and comfortable."

Tunnel to save 52 million hours in traffic

The Eurasia Tunnel, which cost $1.3 billion, will create a business volume of TL 1.5 million for the Turkish economy and save 52 million hours of time in traffic. The time saving potential is one of the great features provided by the tunnel. Thanks to the extra capacity it will provide for the Bosporus passage, it will shorten travel time and save about 52 million hours of time per year.

The amount of vehicular emissions (carbon monoxide, carbon dioxide, nitrogen oxides, particulate matter, etc.) released will be reduced by approximately 82,000 tons per year thanks to the project. As well, 60 subcontractors are working on the project which also employs 800 people a day.

The project has created a business volume of TL 1.5 million per day for the Turkish economy thanks to the expenditures made during the construction work. During the excavation of approximately 2 million cubic meters, 700,000 cubic meters of concrete and 70,000 tons of iron were used. In other words, the amount of excavation conducted within the scope of the project could fill 788 Olympic pools and used enough concrete to build 18 stadiums and enough iron to build 10 Eiffel towers.

The most important stage of the project is the 3.4 kilometer long Bosporus Transition. The world's most advanced tunnel boring machine (TBM) technology was used for the said transition. With the TBM technology, 3,344 meters and 16 months of work were completed in August 2015 by moving 8-10 meters per day.

In the tunnel consisting of a total 674 bracelets, seismic bracelets were installed at two different points to increase the resistance against a possible large earthquake. Seismic bracelets that were specially designed and produced after successful lab testing have become the first application in the world in the "TBM tunneling" sector given the current diameter and seismic activity level.

High-performance precast concrete rings used in the production of tunnels were produced at Yapı Merkezi Prefabrication Facilities, aiming for a service life of 100 years. According to the analyses and simulations conducted by the international certification agency, the service life of the rings was reported to be at least 127 years.

Regulations in the tunnel access roads on the Asian and European sides are still underway as part of the project. While the existing six-lane roads have increased to eight lanes, developments for other improvements such as U-turn, intersection and pedestrian crossings are still being conducted.

The tunnel, which connects to the highway tunnel under the sea floor, will serve the Kazlıçeşme-Göztepe line, which has some of the heaviest traffic congestion in Istanbul. The 5.4 kilometer long section of the 14.5 kilometer route was placed under the seabed in two storeys.

The Eurasia Tunnel will reduce the travel time between Kazlıçeşme and Göztepe from 100 minutes to 15 minutes. Modern lighting, high-capacity ventilation and low-slope features will increase the comfort of travel. The two-storey tunnel will also enhance driving comfort thanks to its road safety contributions. It will provide uninterrupted travel even in bad weather conditions such as fog and icing.

During his speech at the ceremony, President Erdoğan also talked about the next mega projects of Turkey; he stated that the work on Canal Istanbul (Kanal İstanbul) continues and the foundation of the Dardanelles Bridge will be laid in 2018. "With the Eurasia Tunnel, we have added another one to our mega projects like the Yavuz Sultan Selim Bridge, Osman Gazi Bridge and Marmaray. Next is Canal Istanbul, which will hopefully connect the Black Sea to Marmara. We are also a player in this global race. We will build Canal Istanbul and the Dardanelles Bridge. On March 18, we will lay the foundation for the Dardanelles Bridge in Çanakkale," he said. Canal Istanbul is an artificial sea-level waterway project connecting the Black Sea to the Sea of Marmara. It would bisect the current European side of Istanbul and thus form an island between the continents of Asia and Europe.