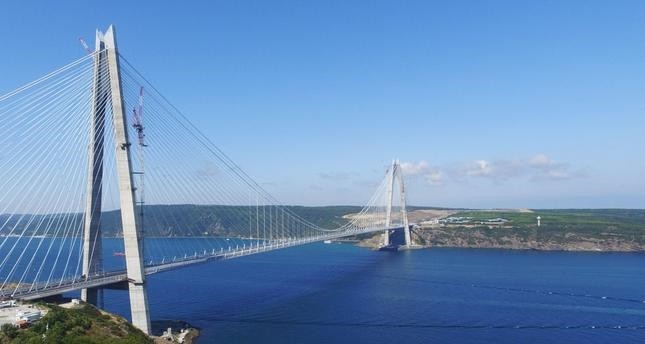 With the completion of Istanbul's third transcontinental bridge, the Istanbul-İzmir Highway Project, the world's fourth longest suspension bridge, plus the Eurasia and Ilgaz Mountain tunnels, it can be said that 2016 was Turkey's year of mega projects

The third bridge for the Bosporus: Aug. 26

Istanbul's Yavuz Sultan Selim Bridge, which cost nearly $3 billion to construct through the build-operate-transfer finance model, opened on Aug. 26 as the world's longest suspension rail bridge in its class. It will lead to $1.75 billion a year in savings through reduced travel times and energy costs.

The bridge was completed within a record-breaking 27-month time frame, nine months ahead of schedule, and it is first of its kind completed in such a time frame. More than 6,500 workers and engineers worked diligently on the construction of the Yavuz Sultan Selim Bridge. The total length of the bridge is 2,164 meters.

Located at the Bosporus' entrance to the Black Sea, the 1.4 kilometer bridge will carry eight lanes of traffic and two rail lines between Europe and Asia, when the Northern Marmara Motorway Project, the next two phases of which will see 257 kilometers of roads, is completed by the end of 2018. The height of the tower in the village of Garipçe on the European side is 322 meters and the tower in the Poyrazköy district on the Asian side is 318 meters high.

This third Bosporus bridge was named after Selim I, the 16th century sultan known for his expansion of the Ottoman Empire. It follows the July 15 Martyrs' Bridge, previously the Bosporus Bridge, and the Fatih Sultan Mehmet Bridge, in spanning the important waterway.

On the 93rd anniversary of the founding of the Republic of Turkey, a new station for high-speed trains in capital Ankara was inaugurated to provide services to 50,000 passengers a day.

The $235-million station, which was built in two years through the public-private partnership model, is among a set of leading infrastructure projects planned as part of a series of objectives for Turkey's centennial in 2023.

According to Turkish State Railways, the facility also boasts 134 hotel rooms and over 200-rentable areas for restaurants, coffee shops, entertainment venues, stores and offices. Twelve office spaces and a parking lot for 1,910 vehicles are also among the other facilities of the station, distinguished for its modern architectural style. The station will be directly linked to means of mass transit, such as a suburban rail system and the subway.

The station has a closed area of 194,460 square meters and consists of eight floors, including the basements, three platforms and six high-speed lines.

Osmangazi Bridge, a landmark road bridge over Turkey's Marmara Sea, cuts travel time between Istanbul and the country's western provinces. It opened to traffic on June 30, forming part of a new six-lane Istanbul-Izmir highway, with a cost of around $6.3 billion. Completed within a 39-month period, the Osman Gazi Bridge aims to decrease the over concentration of industrial operations in Kocaeli's Gebze and Dilovası districts.

The 421 kilometer highway project is being built through a public-private partnership as the first road project in the country to be procured under the build-operate-transfer model.

The project began with an interchange (2x5 lanes) that was built 2.5 kilometers after the Gebze Interchange on the Anadolu Highway, and ending at the Otogar Intersection on the İzmir Highway. The bridge reaches a height of 252 meters and the bridge's deck is 25.93 meters long, with a main span length of 1,550 meters. Totaling 2,682 meters, the İzmit Bay Bridge has the fourth-largest main span in the world. It will eventually cut the average travel time between the Aegean coastal province of Izmir and Istanbul, which are 480 kilometers apart, from 10 hours to approximately four.

Kenan Sofuoğlu, a world-renowned Turkish motorcycle racer, broke a racing record on the bridge prior to the inauguration ceremony, managing to hit the 400 kilometer per hour mark on his sports bike within 30 seconds. 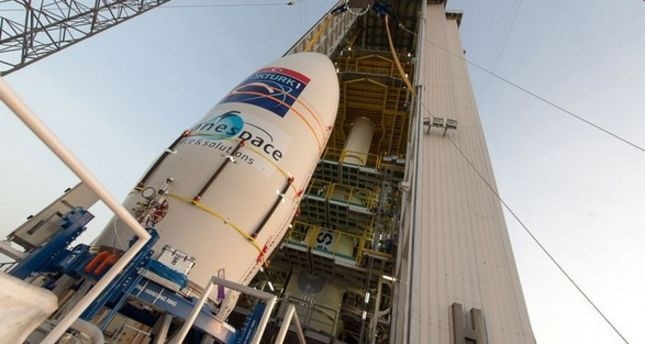 Turkey launched its second military surveillance satellite, the Göktürk-1, from the Kourou Launch Center in French Guiana on Dec. 5.
A military intelligence satellite system that will enable Turkey to obtain high-resolution images from any part of the world without any geographical restrictions, Göktürk-1 is designed to provide secure transmission of the said images to ground units. In addition to its use for military intelligence, the satellite will also provide images for civilian purposes. Turkey's first sub-meter resolution discovery surveillance satellite project, Göktürk-1 was developed primarily to fulfill the needs of the Air Force's Command. Costing a total amount of 261.5 million euros ($273.6 million), the Göktürk-1 satellite will expedite the fight against terrorism due to its ability to receive high-resolution images. The satellite, which circumvents the earth approximately every 90 minutes, is expected to take more than 60,000 images per year. Every time it passes over Turkey, the satellite will transfer the photographs and images taken while in orbit to the Air Force Command's satellite ground station.
A more improved version of Göktürk-2, which can take black and white images at 2.5 meters (8.2 feet) and color ones at 5 meters, Göktürk-1 will be able to capture images in black and white at a 50-centimeter (19.6-inch) resolution and in color at 2 meters. The satellite, which will be able to capture 358 frames per day in high resolution, will have a lifetime of seven years.
Designed to transmit images at a higher resolution compared to similar models in orbit, the Göktürk-1 satellite will also perform remote-sensory tasks for public institutions and organizations in many fields, including environment and construction monitors, agricultural cultivation, municipal applications, border control and cadastral activities.

Eurasia Tunnel under the Bosporus: Dec. 20

Eurasia Tunnel, Marmaray's sister, is the first road tunnel for automotive-transit access between the Asian and European sides of Istanbul under the Bosporus. It reduces the travel time between the two sides to 15 minutes and opened on Dec. 20 with a grand ceremony.
Eurasia Tunnel, which cost $1.3 billion, will create a business volume of TL 1.5 million for the Turkish economy and save 52 million hours of time in traffic. The time saving potential is one of the great features provided by the tunnel. Thanks to its extra capacity, it will shorten travel time and save about 52 million hours of time per year for passing the Bosporus.

The amount of vehicular emissions (carbon monoxide, carbon dioxide, nitrogen oxides, particulate matter, et cetera) released will be reduced by approximately 82,000 tons per year thanks to the project. A total of 60 subcontractors are also working on the project, employing 800 people a day.
The project has created a business volume of TL 1.5 million per day for the Turkish economy thanks to the expenditures made during the construction work. During the excavation of approximately 2 million cubic meters, 700,000 cubic meters of concrete and 70,000 tons of iron were used.
Construction of the titanic-infrastructure project took over four years. The total length of the project is 14.6 kilometers and the most crucial part, the Bosporus crossing, is 5.4 kilometers long.

Constructed with the most advanced design, technology and engineering applications, the tunnel is designed to withstand earthquakes of a magnitude up to 7.5 on Richter scale and tsunamis. Furthermore, with its advanced security features, it can be used as a shelter when necessary.

The Ilgaz Mountain project, consisting of two tunnels - one 5,370 meters (17,618 feet) long and the other 5,391 meters long - was constructed to connect Turkey's west Black Sea and central Anatolia regions, as well as the Black Sea to the Mediterranean, thus constituting an important point in the north-south corridor. Stretching hundreds of meters underground, the tunnel has lessened the difficulty of getting around the 875-meter high Ilgaz Mountain, which was a major obstacle for drivers.

Ilgaz Tunnel is expected to provide 345,655 hours per annum, making up for previous lost time, as well as save 8.3 million liters (2.19 million gallons) of fuel annually. Moreover, the tunnel is estimated to contribute approximately TL 40 million ($12 million) to the Turkish economy. Furthermore, the tunnel will make significant contributions to the industrial entities in the region by carrying the products of factories in central Anatolia to the Black Sea region and facilitate the transportation of the products brought to İnebolu Port to the central regions of Turkey.

President Recep Tayyip Erdoğan, speaking at the opening ceremony of the Eurasia Tunnel, announced that the foundation of the bridge linking Gelibolu on the European side and Lapseki on the Anatolian side will be laid in March 18, 2017. Previously, Ahmet Arslan, the minister of transportation, maritime affairs and communication, confirmed that the last phase of the pre-project survey has been reached and they will receive the bids for the construction of the bridge in Jan. 2017. The bridge will be tendered as a build-operate and transfer model. The 1915 Çanakkale Bridge is planned to be 352 kilometers (218 miles) long covering the Kınalı-Tekirdağ-Çanakkale-Gelibolu-Balıkesir Motorway. At the initial phase bids for the 100 km long part of the bridge, which will link Malkara-Gelibolu-Çanakkale, will be accepted.

After years of development, followed by a period of political uncertainty, Russia and Turkey have finally re-agreed to push ahead with the Turkish Steam pipeline, which is estimated to cost $15.1 billion. The decision was reached at the 2016 World Energy Conference (WEC) in Istanbul and sealed with an intergovernmental agreement signed by Energy Minister Berat Albayrak and Russian Energy Minister Alexender Novak in the presence of President Recep Tayyip Erdoğan and Russian President Vladimir Putin. The 909 kilometers of new pipeline will travel beneath the Black Sea linked to 177 miles of onshore pipes transporting gas from Russia via Turkey to Europe.

The project, which has been in the planning stages since 2014, is expected to reach deliverability of 63 billion cubic meters of natural gas annually once operational. Gazprom expects total costs on the project to reach $15.1 billion. Alexey Miller, Gazprom's chairman, said the first phase of undersea pipe lying will start in 2017 and could be completed as early as 2019. Gazprom will be working alongside Turkey's BOTAS to complete the project. BP's CEO Bob Dudley, speaking at the WEC, also expressed his eagerness to get involved with the Turkish Stream, citing the pleasing results of BP's involvement on another Turkish-involved project, the Trans Anatolian Natural Gas Pipeline (TANAP).

Recently, after the Turkish Grand National Assembly and President Recep Tayyip Erdoğan approved the TurkStream project, it was reported that the Russian government ratified the draft bill on the approval of the TurkStream pipeline project. Now, TurkStream will be voted out in the State Duma, the lower wing of the Russian parliament, in January.
Last Update: Jan 02, 2017 4:39 pm