An equestrian princess lands Samsung at center of scandal 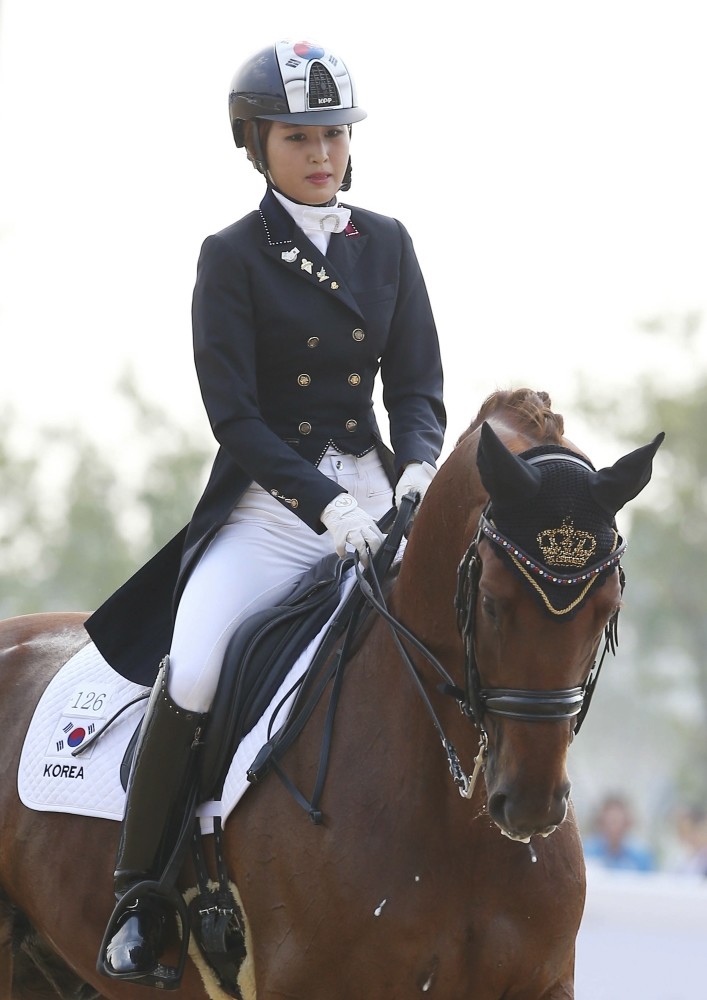 South Koreau2019s Chung Yoo-ra, the daughter of Choi Soon-sil, the confidante of disgraced President Park Geun-hye, competes during the equestrian dressage team competition for the 17th Asian Games in Incheon, South Korea, on Sept. 20, 2014.
by Jan 03, 2017 12:00 am

The scandal around a South Korean cult leader's daughter and President Park's friend, Choi Soon-sil, got Samsung into trouble too. The electronic giant is revealed to have paid $18 million to Choi Soon-sil's firm, whose main beneficiary is her daughter nicknamed ‘equestrian princess'

Samsung Electronics Co's sponsorship of the equestrian-athlete daughter of a long-time friend of President Park Geun-hye has helped to land South Korea's top company in the center of the country's influence-peddling scandal. Samsung agreed last year to pay $18 million to Core Sports International GmbH, a consulting firm controlled by Park's friend Choi Soon-sil, who is in jail and faces charges of abuse of power and fraud in a criminal trial that began this month. A South Korean court has also issued an arrest warrant for Choi's Germany-based horse-riding daughter, 20-year-old Chung Yoo-ra - who has been the main beneficiary of the sponsorship - for alleged criminal interference related to her academic record, and other unspecified charges.

The sponsorship deal is being examined by prosecutors as they try to ascertain whether Samsung, which was also funding and chairing the Korea Equestrian Federation (KEF), sought favors from Choi and President Park in return for funding initiatives backed by them. In particular, they are looking at whether favors included the National Pension Service' support for Samsung's founding family in a shareholder vote last year.

"A crucial part of our investigation is to look into why Samsung and the KEF supported Choi Soon-sil and her daughter Chung Yoo-ra and transferred funds to companies set up by Choi or involved with Choi," an official at the special prosecutor's team told Reuters by phone.

Park has been impeached by parliament over her role in a wide-ranging influence-peddling scandal linked to Choi, and now awaits a Constitutional Court review of that decision, which if upheld would make her the first democratically-elected South Korean leader to leave office in disgrace.

Reuters has reviewed a copy of Samsung Electronics' August 2015 contract with Core Sports to sponsor the team at a German facility in Biblis, a small town south of Frankfurt. Neither party announced the sponsorship.

"Samsung wishes to develop an Equestrian Team, including overseas training of athletes to prepare for 2018 Asian Games and World Equestrian Games," the consulting agreement says.

Samsung Electronics ended up spending about 8 billion won ($6.6 million) on the team, which went to support Chung, according to testimony by Samsung Group's de facto head, Jay Y. Lee, during parliamentary testimony earlier this month. A more precise accounting, including whether some of that funding supported her coach and fellow rider, Park Jae-hong, was

not available. The team was meant to include six riders with 12 horses, Samsung's contract says, but never grew beyond Chung and her coach, according to lawmakers on a parliamentary committee investigating the presidential scandal. Samsung's outlay included the 1 million euros ($962,000) purchase of a horse to be used by Chung named Vitana V, according to Lee. He told the hearing there was a reason the group felt compelled to fund the equestrian team, but did not say what that was.

"I was told there were inevitable circumstances ... But I admit that the deal was done in an inappropriate way and regret that I didn't look into it more thoroughly," Lee testified. He didn't elaborate further. Choi, who has denied legal wrongdoing, told lawmakers on Dec. 26 that she had not sought the sponsorship from Samsung.

Samsung Electronics' support for Choi-backed initiatives also included 1.6 billion won to a foundation run by Choi's niece Jang Si-ho, and another 20.4 billion won, funding shared with the company's affiliates, to two foundations set up by a major business lobby to support Park policies. Prosecutors say in their indictment of Choi that they suspect that she controlled the foundations, including choosing staff. Jang has said the foundation she ran was established to support young athletes and that Choi had asked her to set it up. Her lawyer told a court hearing on Thursday that Jang put pressure on Samsung to sponsor the foundation, but said it was not clear that was the reason for Samsung's backing. Lee told lawmakers Samsung's contributions to the two foundations backing Park's initiatives were not made with any quid pro quo expected. Samsung's offices have been raided twice by prosecutors but none of its officials have been charged with any wrongdoing. The Samsung Group, which has been a major sponsor of the Olympic Games, has also funded a range of sports in South Korea in the past 20 years, including soccer, baseball, basketball, and volleyball. While those sports have mass appeal, equestrian, as in many countries, is seen as a sport for the wealthy elite there were just 251 registered equestrian riders in the country in 2014, according to the KEF.

In 2014, Chung was labeled the "Equestrian Princess" by South Korean media, though she partially answered her critics by winning a group dressage gold medal at the 2014 Asian Games.