Istanbulites to walk across Bosporus strait through undersea tunnel in 2019 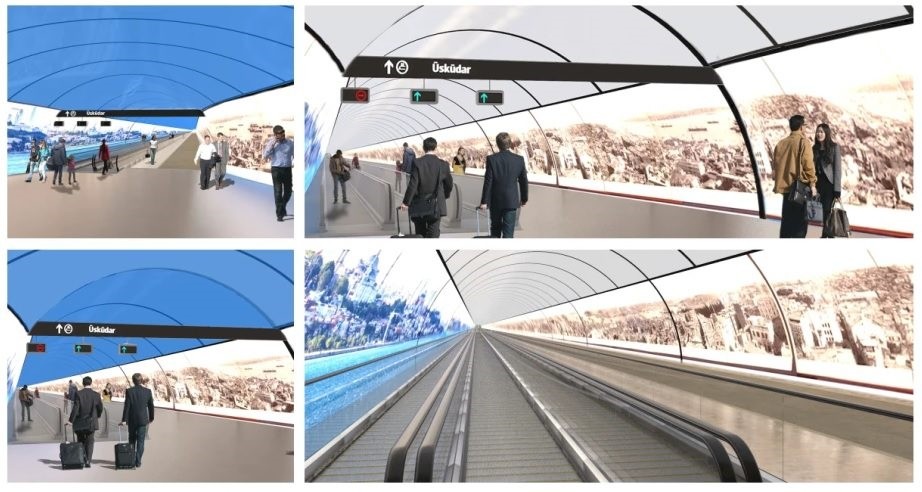 Over the last decade, Istanbulites have been offered many projects that allow them a new way to travel around the city or to pass across the two sites of the Bosporus. The last of those projects is Kabataş-Üsküdar Pedestrian Tunnel Project, which will offer Istanbulites a walk underneath the seabed

Istanbulites are getting ready for another groundbreaking project that will provide them with the opportunity to transverse the Bosporus under the sea with a project launched by the Istanbul Metropolitan Municipality. The last time people in Istanbul experienced a walk right on the Bosporus dates back to 1954, when large masses of ice traveled from the Danube through Istanbul's Bosporus on their way to the Black Sea. It was a very cold winter, but the people of Istanbul enjoyed the view walking on the ice on the Bosporus strait that had restricted marine traffic that day. Of course, every year, the participants of the Istanbul Marathon enjoy running or walking from the Asian side to the European side across the 15 July Martyrs Bridge, accompanied by beautiful Bosporus views. There are nearly a dozen ways to simply travel between the two sides of the strait by using public transportation and the three bridges built over the strait.

The first step was taken for the "Kabataş-Üsküdar Pedestrian Tunnel Project," which will connect the Asian and European sides of Istanbul underneath the Bosporus Strait.

The drilling tender for this project, which was described by Istanbul Metropolitan Municipality Mayor Kadir Topbaş as "one of the most important works of this mastery period," has finished. Anadolu Agency monitored the drilling works, which started with the drilling vessel located near Kabataş. The tunnel is designed to connect two continents underneath the Bosporus Strait between Üsküdar and Kabatas, and will be two kilometers (1.2 miles) long. The top floor of the two-story tunnel, which will be constructed 20 meters (65 feet) under the sea, will be used by pedestrians and bicyclists. The lower floor of the tunnel, on the other hand, will be allocated for rubber-tired electric vehicle traffic.

When the tunnel, which is to be completed in 2019, is opened to service, the passengers getting off the Marmaray in Üsküdar will be able to reach the Kabataş subway by passing to the other side using a moving walkway under the sea. With the project, the Asian and European sides will be once again connected, this time by the walking-tube crossing.

Kadir Topbaş, who submitted the 2015 Annual Activity Report to the Istanbul Metropolitan Municipal Assembly, also announced the "vision projects" for his third term in the office, which he described as "his mastery period." Topbaş stressed that Üsküdar and Kabataş were integral points for the city, stating that these two regions would be connected with a pedestrian tunnel under the Bosporus Strait.

Ways to travel across the Bosporus

Opened with a grand ceremony attended by President Recep Tayyip Erdoğan and Prime Minister Binali Yıldırım on Aug. 26, the Yavuz Sultan Selim Bridge is Istanbul's third bridge linking the European and Asian sides of Istanbul. The bridge, built above the northern part of the Bosporus Strait, was named after the 16th century Ottoman Sultan Selim I, whose rule marked the expansion of the empire's burgeoning world power in the Middle East.

The total length of the bridge is 2,164 meters. The bridge, which stretches 1,408 meters over the Bosporus, has eight lanes of highway and two lanes of railway. It is the longest suspension bridge in the world.

The Eurasia Tunnel, which cost $1.3 billion and was built in four years, opened on Dec. 20. The tunnel, the Marmaray's sister, connects to the highway tunnel under the sea floor, and serves the Kazlıçeşme-Göztepe line, which has some of the heaviest traffic congestion in Istanbul. The tunnel reduces the 100-minute travel time to 15 minutes. The 5.4 kilometer long section of the 14.5 kilometer route was placed under the seabed in two stories.

While the toll for automobiles is TL 16.60, minibuses pay TL 24.90 for passage through the tunnel. A total of eight toll booths will be placed on both the European and Asian sides. As with the Yavuz Sultan Selim and Fatih Sultan Mehmet Bridges, the Electronic Toll Collection System (OGS) and Fast Toll Collection System (HGS) can be used while passing the toll booths.

Considered one of the most visionary projects in Turkey, the Marmaray was opened with a grand ceremony on Republic Day, Oct. 29, marking the 90th anniversary of the founding of the Turkish Republic.

The tunnel is considered to be the deepest-immersed structure in the world, 55 meters below sea level. It is 13.6 kilometers long with 9.8 kilometers of bored tunnel, 2.4 kilometers built using the cut-and-cover method and the remaining 1.4 kilometers a tube tunnel.

The total project cost was estimated at $4.5 billion. There are four main components of the Marmaray Project: the underwater railway tunnel, improvement of the Gebze-Haydarpasa and Sirkeci-Halkali suburban-railway lines, electrical and mechanical works and the procurement of new-rolling stock. With the opening of the tunnel, commuter trains have started operating from the Ayrilikçesme station (Asia) to the Kazliçesme station (Europe).

The first bridge built over the Bosporus strait with the aim of connecting the two sides of Istanbul was the 15 July Martyrs Bridge, which was then called the Bosporus Bridge. The first bridge over the Bosporus strait was built in 1973, the construction of which started in 1970, with a total cost TL 516 million. The 1560-meter-long bridge not only allows private automobiles passage between the Anatolian and European sides of Istanbul, but it also accommodates public transportation vehicles such as buses and the metrobus (Bus Rapid Transportation). The toll for automobiles is TL 7, and if Istanbulites want to use the metrobus to travel across the two sides, the toll for the metrobus is TL 3.55.

The second bridge over the Bosporus is the Fatih Sultan Mehmet Bridge, which was opened to traffic in 1988. The bridge, which cost $130 million at the time, allows passage for inter-city buses and other vehicles that are not classified as automobiles. At the time of its construction, the aim was to provide passage for large trucks that carry goods across cities and countries as well as inter-city buses to prevent clogging up the urban traffic.

Traditional ferryboats cover most of the sea traffic in Istanbul as well as transportation between the Istanbul's two sides. They travel up, down and across the Bosporus connecting districts such as Karaköy, Eminönü and Besiktaş on the European shore with Üsküdar, Kadıköy and Haydarpaşa on the Asian side. Ferries come and go frequently, on average every 30 minutes. IDO, Istanbul's Fast Ferry and Sea Bus Company, also operates inner-city and inter-city lines.
Last Update: Jan 20, 2017 10:49 am
RELATED TOPICS