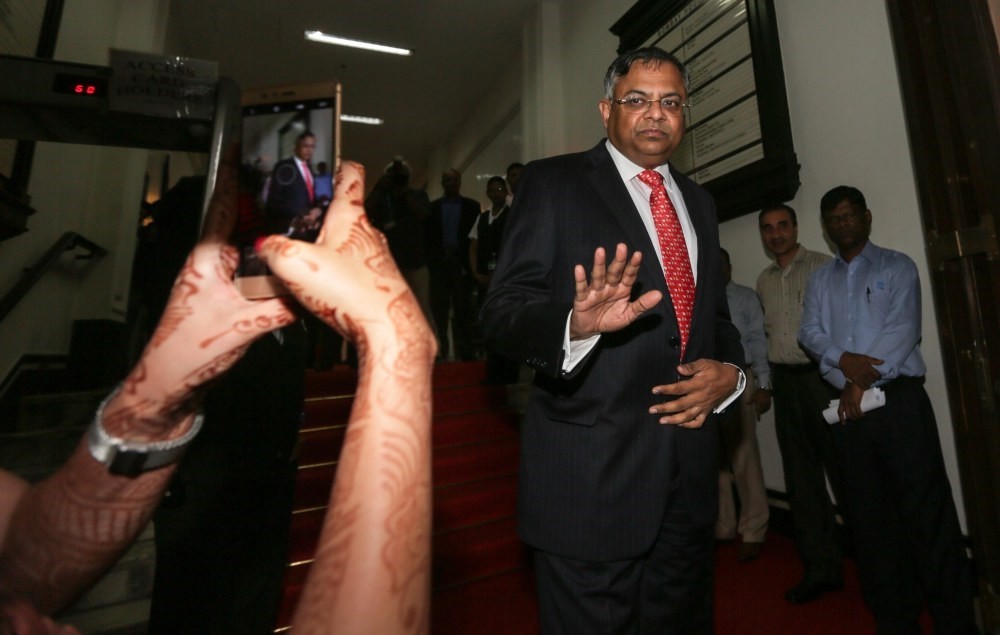 Natarajan Chandrasekaran (R), newly appointed chairman of Tata Group, exits after speaking to the media at Bombay House, the Tata Group head office in Mumbai.
by Feb 22, 2017 12:00 am
India's salt-to-steel Tata Group has been grabbing headlines of late thanks to an ugly boardroom battle. But that's not the reason most people probably know about - or unknowingly have dealings with - the company.

One of India's oldest and biggest conglomerates, the group traces its beginnings to a small trading company set up in Mumbai by a Parsi businessman named Jamsetji Tata in 1868.

In 1907, the group set up the country's first iron and steel plant in eastern India, clearing forests to build a huge township, now called Jamshedpur, after the Tata founder. With headquarters at the iconic Bombay House in Mumbai, today's Tata Group has more than 100 companies operating across six continents. Of these, 29 are publicly listed.

The group's first major foreign acquisition was the British brand Tetley in 2000, followed by bigger acquisitions such as Land Rover Jaguar and Anglo-Dutch steelmaker Corus - a hugely loss-making enterprise and one of the bones of contention in the tussle between former Tata Group chairman Ratan Tata and the recently replaced Cyrus Mistry.

On December 2012, Ratan Tata, then 75, handed over to Mistry, 50, the chairmanship of Tata Sons, which is the principal investment holding company and promoter of Tata companies. About 66 percent equity of Tata Sons is owned by philanthropic trusts, which support education, health, and art and culture. After Mistry was unceremoniously sacked as Tata Sons chairman on Oct. 24, Tata resumed temporary chairmanship, overseeing months of a bitter battle to oust Mistry from all company boards. Tata and his supporters maintained Mistry had lost the confidence of the Tata Sons board and hinted at conflict of interests, while the latter said there were corporate governance issues and the Tatas were unhappy with his clean-up drive. Both Tata and Mistry are members of Mumbai's tight-knit Parsi community. Mistry belongs to the Shapoorji Pallonji family, which owns 18.4 percent equity in Tata Sons.

Parsis are descendants of Iranian people following the Zoroastrian faith who migrated to India in mediaeval times to avoid persecution. The word Parsi comes from Persian.

Since its inception, the Tata group has been headed by a Tata descendant or a relative by marriage. Mistry was the first "outsider," but his sister Aloo is married to Noel Tata, Ratan Tata's half-brother.

Yesterday, Natarajan Chandrasekaran, chief executive officer of Tata Consultancy Services, India's top IT company in terms of market capitalization and one of the group's biggest success stories, took over as chairman of Tata Sons. He is the first non-Parsi with no links to the Tata family to head the group.
RELATED TOPICS