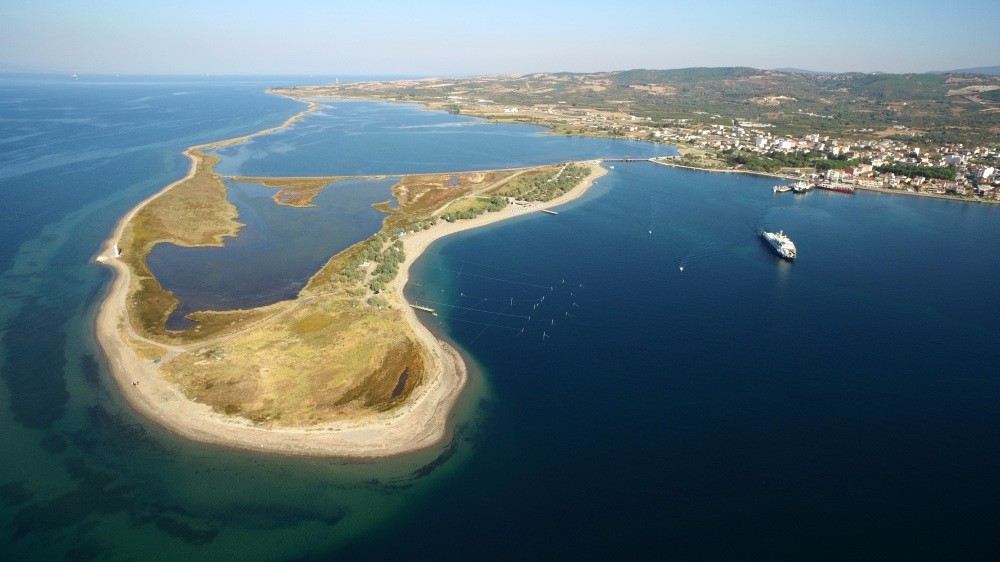 The ground laying ceremony of the u00c7anakkale 1915 Bridge, which will gain the title of the world's longest suspension bridge, will take place on March 18, the day of historic Dardanelles Victory of 1915.
by Daily Sabah with AA Mar 08, 2017 12:00 am

Turkey is approaching the ground laying ceremony of another mega project, the Çanakkale 1915 Bridge, which has an estimated cost of around TL 10 billion. The construction of the bridge is expected to add 2,000 jobs and boost the economy in the region

The countdown has begun in Çanakkale for the ground laying of Çanakkale 1915 Bridge, which will gain the title of the world's longest suspension bridge, on March 18.

Following the completion of tender for the bridge's construction on Jan. 26, feasibility and drilling work have also been completed for the bridge which will be erected in Çanakkale, in a strategic position in the Marmara Region along a transportation line extending from the Thrace to the Aegean and Mediterranean seas.

Set to be built between Lapseki's Şekerkaya region on the Anatolian side and Gallipoli's Sütlüce region on the European side, the project which, will be completed with an investment of over TL 10 billion ($2.7 billion), will be the first for the Dardanelles Strait and the fifth suspension bridge in the Marmara region. The local residents of Çanakkale are awaiting this historic event on March 18 with enthusiasm, according to surveys being conducted by local institutions and organizations along the bridge's route where it will start being built with a ground laying ceremony.

Defined as a "global project," the bridge will consist of a six-lane divided highway and is expected to contribute immensely to the economy and social life in Çanakkale.

Lapseki Mayor Eyüp Yılmaz told Anadolu Agency (AA) that Çanakkale's 50-year-old dream will finally come true. Stating that the issue of constructing a suspension bridge in Çanakkale has been discussed for many years, Mayor Yılmaz said they are counting down the days for the groundbreaking ceremony.

Highlighting that the bridge has created a stir citywide, Yılmaz noted that they had dreamed of the construction of a bridge in Çanakkale for many years - a dream that is finally coming true. Informing that the works are continuing intensely, Yılmaz said, "Our bridge has caused great excitement in Lapseki. The realization of something that has been discussed in Çanakkale for many years is very important for us. The fact that one of Turkey's mega projects is being carried out in Çanakkale is another source of happiness."

Stressing the fact that the abutments of the bridge will be positioned in the Lapseki and Gelibolu districts, adding great value to the region, Yılmaz said, "We're approaching March 18 step-by-step and counting down together. We will hold the groundbreaking ceremony here with President Recep Tayyip Erdoğan, Prime Minister Binali Yıldırım and other guests in attendance."

The bridge construction to add 2,000 jobs

Pointing out that the suspension bridge will also contribute to the job market in the region, Yılmaz recalled that they held extensive talks with the representatives of firms and associate firms that will build the project. He also added that 2,000 people will be employed in the construction phase of the bridge: "This figure will both contribute to the employment in the region and boost the economy," Yılmaz emphasized.

Selahattin Civan, a waiter working in a local restaurant, noted that they expect the bridge to provide benefits for everyone. Underlining that the bridge spells both customers and new business potential for them, Civan said, "We see a mobility and different visitors in our district everyday. I think that it will be good for our district in terms of both business and investment." He also confirmed that the bridge will provide new job opportunities for the unemployed.

İbrahim Kıroğlu, one of the local tradesmen, said he watched the program of Transport, Maritime Affairs and Communications Minister Ahmet Arslan, who paid a visit to the district which increased his excitement over the ground laying of the bridge.

Noting that life in Lapseki is now changing, Kıroğlu said, "There had been some speculation about the construction of the bridge as well as some rumors about the change of its location. We are looking forward to the day of the groundbreaking ceremony. I believe that the district's economy will also change after this."

Turkey's highway authority has received bids from four international consortiums to build, operate and maintain a new TL-10-billion suspension bridge over the Dardanelles Strait, the authority announced previously. A Turkish and South Korean consortium, including Turkish companies Limak and Yapı Merkezi and Korean companies Daelim and SK, committed to the shortest term; five and a half years to build and almost 11 years to operate after construction. The consortium bid TL 10.3 billion for the project.

Turkey has been working to build mega infrastructure projects across the country to boost economic growth, including Istanbul New Airport, the city's third airport, which will have a capacity of up to 200 million passengers annually. In 2015, Turkey raised the bar with seven completed projects which totaled a record $44.7 billion, according to the World Bank Group.

A total of four mega projects are currently under construction: Istanbul's third airport, the Gebze-Halkalı commuter train link in Istanbul, Ovit Tunnel in northeastern Anatolia and the Baku-Tbilisi-Kars Railway.

Last year, Turkey opened a third bridge over the Bosporus Strait, Yavuz Sultan Selim Bridge - named after a 16th-century sultan known for his expansion of the Ottoman Empire - as well as the world's fourth-longest suspension bridge over the Bay of İzmit, Osman Gazi Bridge, and the Eurasia Tunnel, which is an underground tunnel featuring a roadway linking Istanbul's European and Asian sides.
RELATED TOPICS