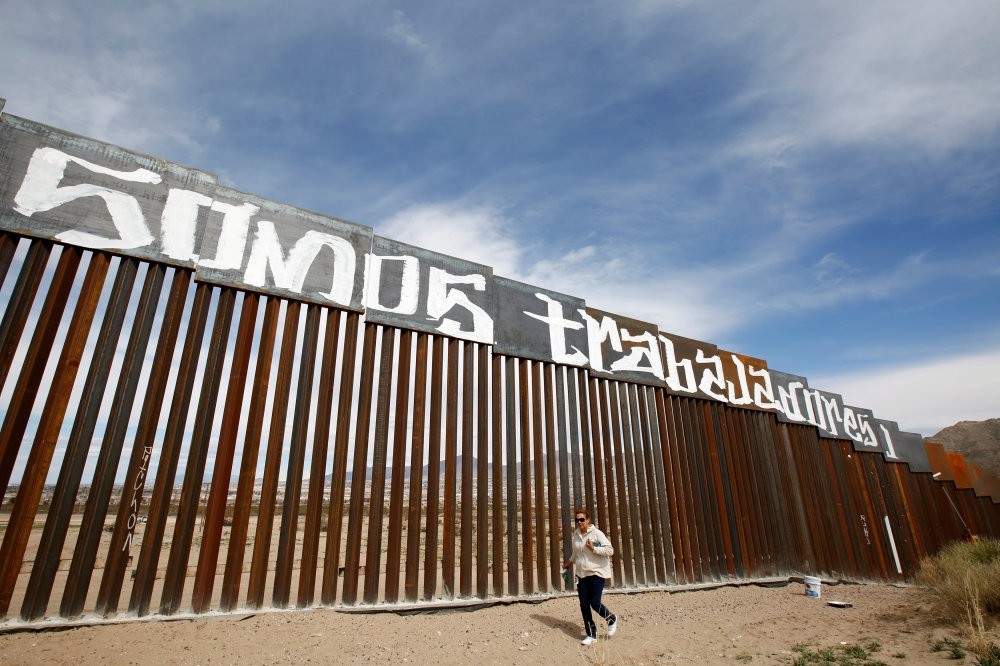 A group of activists paint the U.S.-Mexico border wall between Ciudad Juarez and New Mexico as a symbol of protest against U.S. President Donald Trump's new immigration reform. The paint reads ,We are workers.,
by Mar 11, 2017 12:00 am

The wall Trump promised to erect along the U.S.-Mexico border, valued at tens of billions of dollars, is at the center of a diplomatic crisis between Mexico City and Washington but LafargeHolcim eyes lucrative business

French-Swiss group LafargeHolcim is ready to supply its cement for U.S. President Donald Trump's controversial border wall, the company's CEO said in an interview. The wall Trump promised to erect along the U.S.-Mexico border, valued at tens of billions of dollars, is at the center of a diplomatic crisis between Mexico City and Washington and is provoking criticism around the world.

"We are prepared to supply our materials to all types of infrastructure projects in the United States," LafargeHolcim chief Eric Olsen told AFP.

"We are the leader in cement, so we supply all our customers," he said, adding, "We are here to support the building and development of the United States."

When asked about the possible consequences for the company's reputation, Olsen stressed that LafargeHolcim is not a political entity.

"We are here to supply our customers' needs," he said, clarifying that, "We don't have a political view on things."

He refused to comment on a possible victory for extreme right-wing candidate Marine Le Pen in the French presidential election - a prospect increasingly worrying international business and financial circles.

Olsen also declined to comment on the indirect financing by Lafarge in 2013 and 2014 of armed groups in Syria, a country torn by civil war, to keep one of its cement plants active. French President Francois Hollande warned the company to "be cautious before bidding" on the project.

There are certain businesses in which "one must be careful before declaring" participation, Hollande said at a press conference in Brussels. Late last month, the U.S. government posted a preliminary solicitation for companies interested in participating in the wall project. LaFargeHolcim is on the list, along with nearly 600 other companies. While this apolitical stance risks causing the firm bad publicity, especially in Europe, the financial impact on sales would likely be negligible because LafargeHolcim does not sell cement directly to ordinary consumers.

The company is therefore shielded from a potential boycott like the one targeting Uber, which was criticized for its slow reaction to the first travel ban by the Trump administration that blocked travelers from several Muslim-majority countries. Thousands of customers deleted the app from their phones.

In contrast to LafargeHolcim, Irish cement manufacturer CRH, also with a presence in the U.S. market, already announced it will not supply its materials for the border wall. The stakes are high for LafargeHolcim, a group created in 2015 by the merger of French cement manufacturer Lafarge and its Swiss counterpart Holcim. The company hopes to be one of the big winners of the $1 trillion infrastructure investment program Trump has promised that has been designed to renovate bridges, tunnels, roads and airports. Olsen noted, "There is going to be a significant increase in infrastructure spending." Although the benefits are not likely to be felt this year, he added, "Because it takes time for these infrastructure projects to get going."

The cement maker, which returned to profitability last year after losses in 2015, is expected to announce the creation of new U.S. jobs in the coming weeks, a topic central to Trump's agenda.

"I don't have a specific number," Olsen said, but "We will be creating jobs," he affirmed.
RELATED TOPICS