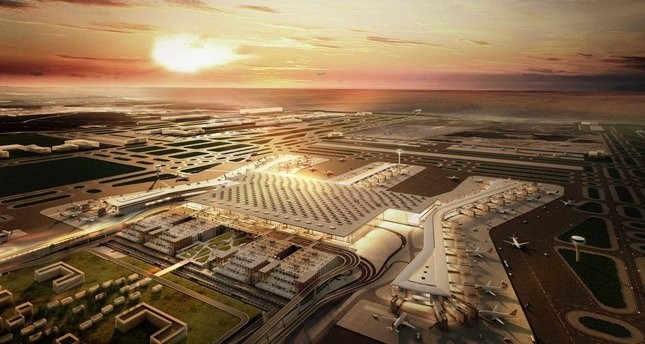 The construction of the terminal building of the Istanbul New Airport is by 95 percent complete.
by Daily Sabah with AA
Mar 13, 2017 12:00 am

Construction of the first phase of Istanbul's third airport continues to gather speed, with the airport's terminal building now 95 percent complete. Additionally the first runway is to be completed by May or June

The countdown for the opening of Istanbul's third airport, known as Istanbul New Airport, has started. About 95 percent of the construction of the terminal building has been completed; elevators and escalators have been installed in some sections and installation of the facade and roof has commenced. The rough construction of the Air Traffic Control Tower is complete. It is expected that runway number one will be completed along with all taxi routes in May or June.

Istanbul Grand Airport (IGA) CEO Yusuf Akçayoğlu told Anadolu Agency (AA) that winter conditions were much more challenging this year than the previous year, causing some setbacks that led the construction to last longer than desired.

Akçayoğlu noted that some 22,000 people are working at the construction site because of current winter conditions, adding, "This figure will increase toward summer, and we will increase the number of employees to 30,000."

According to Akçayoğlu, construction activities in all sections of the terminal building continue. Belt conveyors and escalators have been installed in the ground where the first foundations were laid, while the installation of elevators and escalators continues.

Underlining that work to finalize the rough construction on the terminal building is on track, Akçayoğlu said they have so far laid some 2.2 million cubic meters of concrete and defined this amount as significant.

He said: "Some 95 percent of the rough construction of the terminal building is over, and total physical progress is around 40 percent. As I previously said, we could not proceed, as we wanted because of the snow and winter conditions. We anticipate a significant increase in this figure as of March."

Akçayoğlu emphasized that they aim to completely finalize construction before the end of the year, announcing that they would start test work in technical areas, such as escalators and elevators, in some sections in September.

Akçayoğlu also stated that work on the facade and roof has started in some parts of the terminal building.

Akçayoğlu said that they would provide the building with power as of June and that Istanbul New Airport has a power requirement of 250 megawatts. Akçayoğlu said: "This figure is higher than the total energy consumed in many provinces. The construction of our energy center is over. Three transformers, each 120 megawatts, have been installed. They will meet an energy requirement of 250 megawatts. The energy transmission line is being built by the Turkish Electricity Transmission Company (TEİAŞ), and we will energize the building as of June."

Rough construction of control tower is over

According to Akçayoğlu, construction of the airport traffic control tower for Istanbul New Airport, designed by Pininfarina and Aecom, is rapidly progressing. The tower will be 90 meters high and have a construction area of 6,085 square meters.

Akçayoğlu added, "Having received the 2016 International Architecture Award for its design, the tower will be one of the hallmarks of Istanbul and will impress the aviation industry with its design. The design, inspired by tulips, will be visible to all passengers traveling through the airport between Europe and Asia. The rough construction work on the control tower is over, and the parts that we call 'bottom and base' continue, and construction on the façade will start, and we expect the building to be completed in June."

Acceleration of construction ahead

Akçayoğlu, stating that the third airport will open in the first quarter of the next year, Feb. 26, 2018, said there is only a narrow period of time left to finish construction. Moreover, stating that they have done everything in their power up to now and that they are and will continue to do so, Akçayoğlu said:" it is not easy to reach a figure of 30,000 employees. This is an unprecedented figure." He added that they have a meeting every day to see whether everything is going according to plan, indicating that they will speed construction even further.

Construction of the runways located in the airport's first stage, which should open next year, is in progress, the IGA CEO underscored. Recalling that construction of the first stage's two detached parallel runways in the north-south direction had already begun, Akçayoğlu said that the excavation and filling of the first runway, which is 3,750 meters long and 60 meters wide, had been completed to a great extent. He added that only the upper part of the runway, namely the asphalt part, remains.

"We will see the finished phase of this runway with all the taxi routes as of May-June. There was a slight disruption on the second runway due to the rainy weather. Once the weather gets warm, we will manage to complete the construction of that runway in time," said Akçayoğlu. Indicating that only the asphalting work on the runway had started, Akçayoğlu said it is expected to be completed in a short period of time.

In its economic impact analysis report on Istanbul New Airport, the Center for Economics and Foreign Policy Studies (EDAM), previously said the airport will make TL 73 billion ($20.40 billion) worth of contributions to Turkey's economy by 2025.

The additional household income to be generated will go up to $4.4 billion and its contribution to the economy will reach around 4.9 percent of the national income (TL 73 billion).

The report also indicates that the airport would provide opportunities for flights to more than 350 destinations for nearly 100 airline companies. According, to the best-case scenario, as of 2025, a total of 120 million passengers, including 35.5 million domestic flights and 84.9 million international flights, were expected to be operated in and out the airport.