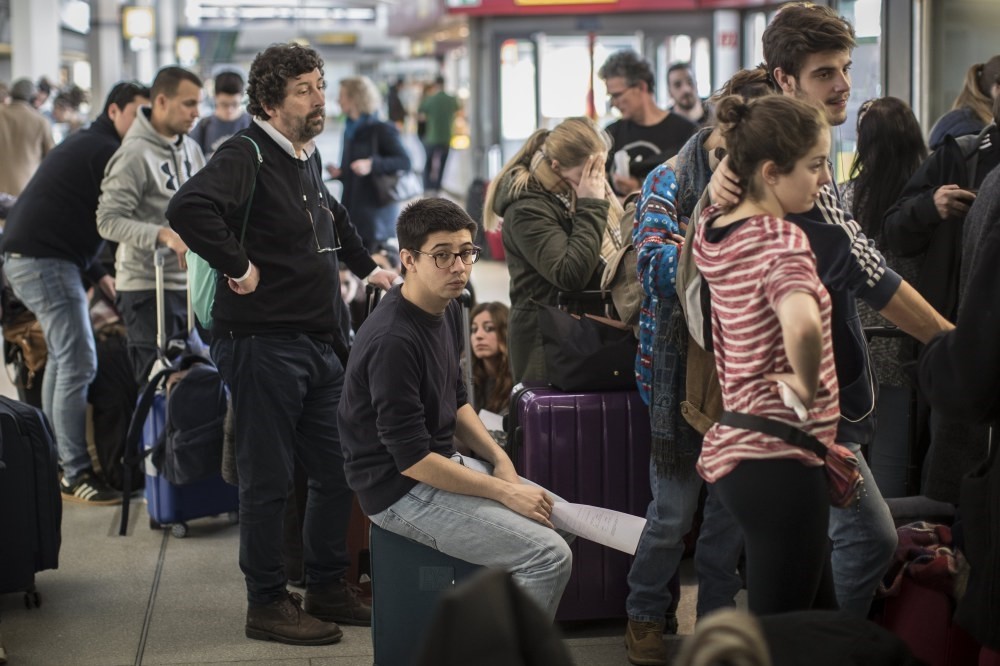 Stranded passengers wait for service at the airport Tegel in Berlin. Ground staff at the Berlin airports in Tegel and Schoenefeld went on strike demanding a raise of their hourly wages.
by Mar 15, 2017 12:00 am
Around 2,000 ground staff whose series of strikes at Berlin's airports have paralysed air travel to and from the German capital will not stage further walkouts this week, while their employers have proposed mediation to end the action. The staff, whose roles include check-in, loading and unloading planes and directing aircraft on the tarmac, are employed by companies including WISAG, Aeroground, Ground Solution, AHS and Swissport Berlin.

Yesterday the employers proposed mediation in a bid to end the walkouts, which have led to more than 1,800 flights being cancelled over three days, equivalent to almost all the flights operating out of Berlin's two airports on the strike days since Friday. Yesterday 578 flights were grounded. The latest walkout is due to end at 0400 GMT today, and the union said yesterday there would be no strikes for the rest of the week to allow management to make a new offer. The union wants an increase in pay for ground staff to 12 euros ($12.76) an hour from about 11 euros as part of a one-year collective agreement. Management first offered about 10 cents more an hour over four years and then improved that offer to an 8 percent increase over three years.

"The positions are so far apart from each other that we think mediation is the only way to find an acceptable solution for both sides," a spokesman for the employers said yesterday. Verdi strike leader Enrico Ruemker said the union must first examine the proposal. Berlin's two airports are served by carriers including Air Berlin, Lufthansa , easyJet and Ryanair , all of which have been hit by the strikes. Ryanair chief marketing officer Kenny Jacobs confirmed the carrier had brought in "a number of fully qualified and authorised ground handling staff" to dispatch Berlin aircraft.