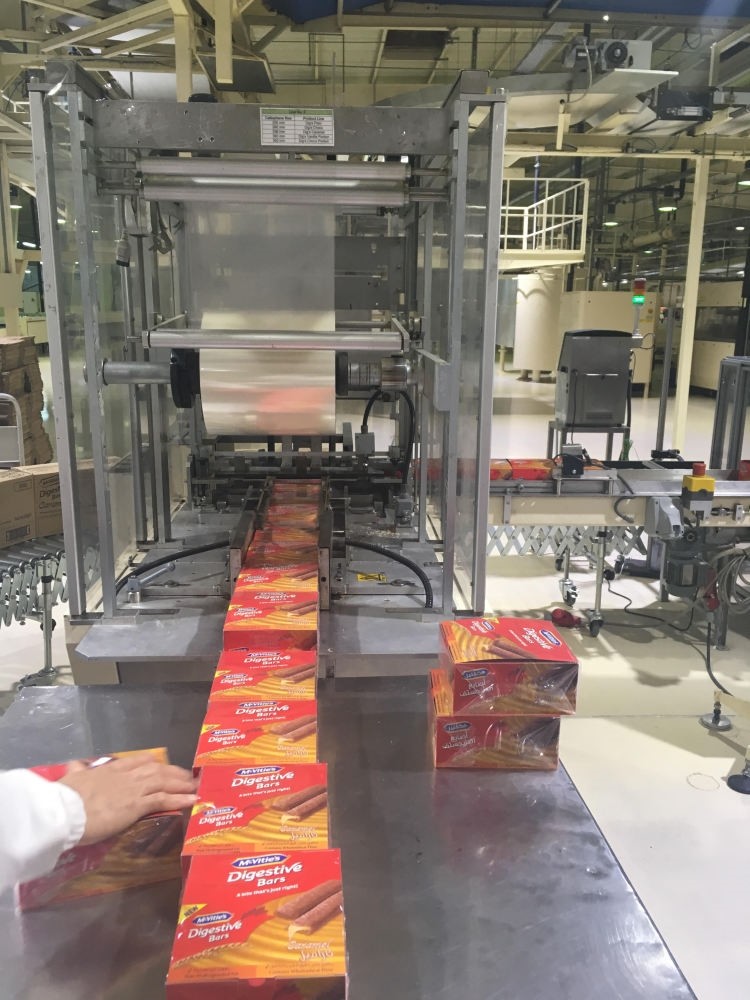 Pladis's FMC factory in Jeddah has in total 12 assembly lines on which 81 different products in four different categories, including biscuits, wafers, muffins and chocolate, are produced.
by Şeyma Eraz Mar 16, 2017 12:00 am

Turkey's 73-year-old-brand Ülker and its old rival, now subsidiary target a 23 percent growth this year in the Middles East and North Africa region with the confidence of their united experiences gained under their global company, Pladis

It was late at night when we arrived at our hotel in Jeddah. I just wanted to have a hot drink, so I turned on the coffee machine. I looked around to explore my hotel room and realized there was a gift box on the table. I opened it and saw Ülker labels, the leading Turkish biscuit and chocolate producer. "Something savory would be good," I thought, but then saw that all the biscuits were sweet. I was a little upset because I really like Ülker's savory biscuits. On the next day in a press meeting with Ülker's managers, I learned that it was all about the marketing strategy - Saudis simply do not like savory biscuits.

The 73-year-old brand has become the world's third largest biscuit producer, after uniting with U.K.-based United Biscuits, which emerged as a brand in 1948 following the merger of Carr's (founded in 1830), McVitie Price and MacFarlane Lang. Ülker and McVitie's, previously rivals in the Middle East and North Africa (MENA) market, now aim to grow 23 percent this year in the region with the confidence born from their united experiences under their global company Pladis.

Pladis ended a successful year in 2016 with a gross sales volume of TL 14.1 billion. Of this amount, 38 percent was gained from three markets; Turkey, the Middle East and the North Africa (MENA) and Middle Asia regions. While the MENA region claimed seven percent share of these sales, Pladis are set to grow 23 percent this year in the region, with its share in regional sales expected to reach 12 percent in 2019, making MENA the third biggest market for the company after Turkey and the U.K.

Ülker's journey in the Middle East started with an export volume of $200,000 in 1974 and has gained momentum thanks to McVitie's. Pladis, the united brand, has reached $320 million sales volume in the MENA region with two factories in Saudi Arabia and one factory in Egypt.

Pladis Regional CEO Mehmet Tütüncü noted that dates are among the most popular sweets around the world and found in many categories, adding that Ülker also has a date flavored biscuit named "Ülker Tamr Biscuit."

Informing that the country has a population of 32.7 million, while the average number of people per household is 6.4, Tütüncü indicated that therefore, boxes with products of 10, 12 and 20 are preferred rather than pieces, unlike many countries, while people shop for snacks at the supermarkets and hypermarkets. "As men consume snacks at work, women prefer eating snacks at home, enjoying some free time, socializing with relatives and guests and watching television," Tütüncü added, highlighting that for women, eating snacks means enjoying themselves, welcoming guests well and being practical during daily rush.

"Biskrem is one of our most popular products in Saudi Arabia," Tütüncü said, pointing out that Saudi consumers love products that contain biscuits and chocolates together and mostly prefer sweet products, resulting in higher sales numbers in sweet biscuits than crackers.

"We aim to complete the distribution structure of our McVitie's deal this year in Saudi Arabia and make the supply chain and data processing infrastructures fit the new structure. We predict 23 percent growth in the Saudi Arabian market in 2017," Tütüncü said, underlining also that Saudi Arabia is showing a much higher growth performance than regional markets.

We had the chance to visit Pladis's FMC factory in Jeddah, which is located on an area of 22,000 square meters with 18,000 square meters of closed space. The factory has in total 12 assembly lines on which 81 different products in four different categories, namely, biscuits, wafers, muffins and chocolate, produced.

As well as two hygienic raw material storage units with a cooling mechanism, the factory also has a shipment storage unit that ensures provision of a separate temperature for biscuits and chocolate products.

A total of 526 employees work at the factory and 126 of them are female. The factory has departments for human resources, information technology (IT), quality management, research and development (R&D), purchasing, shipment and production. With regards to production certificates, the factory holds the ISO 22000 Food Safety Management and quality certificates from Hazard Analysis and Critical Control Points (HACCP) and the American Institute of Bakery (AIB).

Pladis's IBC Factory is founded on an area of 28,000 square meters and has a closed space of 21,000 square meters. The factory has 6 assembly lines in total, out of which two produce biscuits while three are used for wafer production and one for chocolates. The factory has a range of 15 different products in three different categories: biscuits, wafers, and chocolate.

As well as hygienic raw material storage with a cooling mechanism, the factory also has a shipment storage that ensures a separate temperature for biscuits and chocolate products.

A total of 291 employees work at the factory and 38 of them are female. With regards to production certificates, the factory holds the ISO 22000 Food Safety Management and quality certificates from Hazard Analysis and Critical Control Points (HACCP) and the American Institute of Bakery (AIB).
RELATED TOPICS