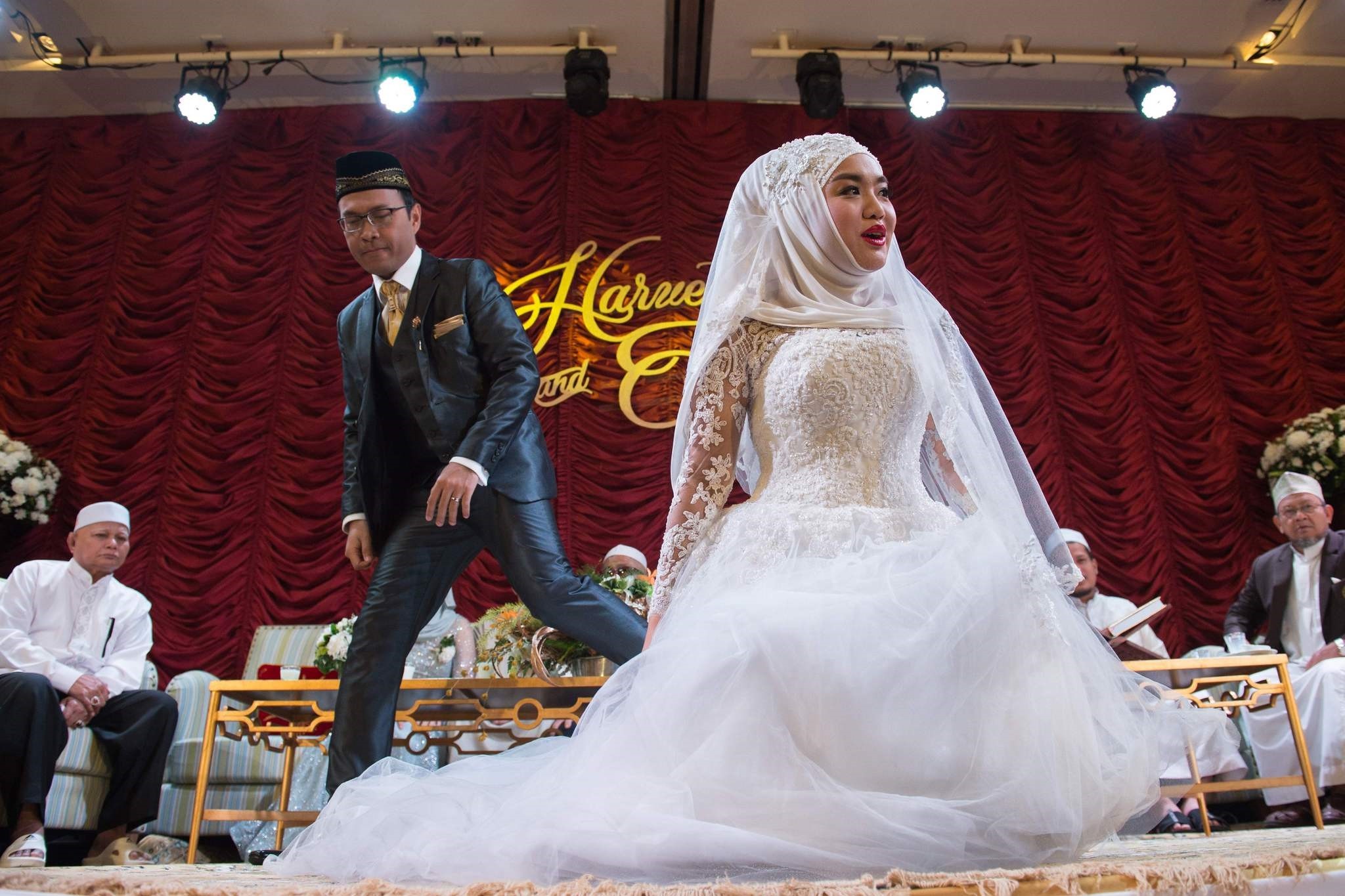 A newly married woman and her husband (2nd L) get ready to pose for a portrait during their wedding reception at the Al Meroz hotel in Bangkok.
by Mar 20, 2017 12:00 am
From hotels with segregated swimming pools to jelly made from seaweed instead of pig bones, Buddhist Thailand is chasing halal gold as it welcomes Muslim visitors and touts its wares to the Islamic world. Inside the cavernous dining hall of the five-star Al Meroz hotel in a Muslim suburb of Bangkok, an elderly man with a wispy beard recites verses of the Quran as a nervous-looking groom awaits the arrival of his bride. The young man bursts into a smile as his soon-to-be wife appears, clad in a brilliant white dress with matching headscarf.

The ceremony is one of dozens of marriages held over the last few months at the Al Meroz, the city's first entirely halal hotel. Thailand has long been a draw for the world's sun-seekers. But it has also seen a huge influx of visitors from Muslim countries, part of a quiet but deliberate strategy by the Southeast Asian nation to diversify its visitor profile.

"Considering there are 1.5 billion Muslims around the world, I think this is a very good market," explains Sanya Saenboon, the general manager of the hotel, one of a growing number of businesses serving a boom in Islamic tourists. The hotel opened its doors last year, setting itself apart with its attention to all things Islamic. For a start there is no alcohol on sale, while the top floor swimming pool and gym has specific times for when men and women can use the facilities.

Everything in the building has been ticked off against stringent checklist for practicing Muslims, from bed linen washed in a particular way, to ensuring toiletries are free of alcohol or animal fat, making everyday goods "permissible" for the faithful. Sanya, who is Muslim, says such checks give visitors "peace of mind" so clients never have to ask themselves "can I eat this?"

Despite a decade of political turbulence, Thailand has seen an explosion in tourist arrivals, from 13.8 million annual visitors in 2006 to a record 32.5 million last year. Western arrivals have largely remained a constant. The biggest increase in arrivals comes from China, skyrocketing from just 949,000 arrivals 10 years ago to 8.7 million visitors in 2016. But Muslim countries are also sending their citizens. An analysis of government figures shows visitors from key majority Muslim nations in the Middle East and Asia have risen from 2.63 million in 2006 to 6.03 million last year.

"Thailand was ahead of the curve," says Fazal Baharden, founder of the Singapore-based Crescent Rating, which rates which countries are most welcoming to Muslim travelers. Thailand routinely places in the top two for non-Muslim majority nations alongside Singapore in Crescent Ratings' annual survey of halal destinations. Baharden says the Islamic travel market is one of the world's fastest growing thanks the growth of cheap flights and booming Muslim middle classes. He estimates the number of Muslim travelers has surged from around 25 million a year in 2000 to 117 million in 2015.
RELATED TOPICS