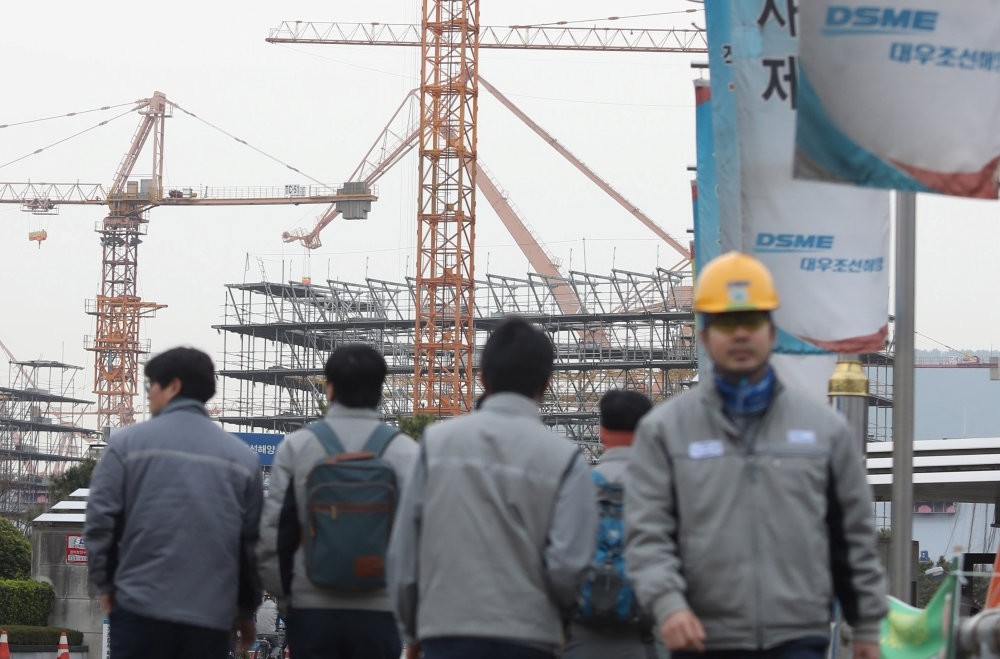 Employees of Daewoo Shipbuilding & Marine Engineering walk in a shipyard in Geoje, South Korea.
by Mar 24, 2017 12:00 am
South Korea offered troubled Daewoo Shipbuilding & Marine Co. a new $6 billion bailout yesterday, as the giant firm's financial crisis worsens. Daewoo is the world's largest shipyard in terms of its order book and was previously given a 4.2 trillion won ($3.8 billion) aid package in 2015. It is majority-owned by state-owned banks. Previously it was a subsidiary of the now-defunct Daewoo Group, once the country's second-largest conglomerate but which collapsed in the 1990s. The shipbuilding unit survived, only for the sector to suffer turmoil of its own in the face of a global glut of vessels and ferocious price competition from China. It suffered a 2.7 trillion won net loss last year, with its debts 27 times greater than its capital.

The 6.7 trillion won ($6.0 billion) bailout envisages 2.9 trillion won in fresh loans from the Korea Development Bank (KDB), its largest shareholder and main creditor, and the Export-Import Bank of Korea, also a shareholder. The money is conditional on other lenders and bondholders agreeing another 3.8 trillion won in debt-for-equity swaps and rollovers. The new rescue plan sparked criticism that Seoul was backtracking on earlier promises to stop injecting fresh funds into Daewoo.

Daewoo was in "critical" financial condition and would face insolvency in April, when it has to repay large corporate bonds, unless "strong and comprehensive measures" were taken, he told journalists.

The global shipbuilding slump is expected to ease from 2018, when according to Yonhap news agency the government hopes to sell a downsized and reborn Daewoo to reduce the country's "Big Three" shipbuilders - which also include Hyundai Heavy Industries and Samsung Heavy Industries - to two, for better economies of scale. The "Big Three" shipbuilders were once considered jewels in Korea Inc.'s corporate crown, controlling nearly 70 percent of the global market after seeing off their European and Japanese rivals in the 1980s and 1990s. Year after year, they churned out massive cargo ships, oil tankers and offshore drilling rigs for shipping firms and energy giants around the world. But a prolonged slump in oil prices and the global economic slowdown sapped demand for tankers and container ships, while overcapacity, regional rivalry and competition from cheaper Chinese shipbuilders squeezed profit margins. The three racked up a collective loss of 8.5 trillion won ($7.4 billion) in 2015.
Last Update: Mar 24, 2017 1:03 am
RELATED TOPICS