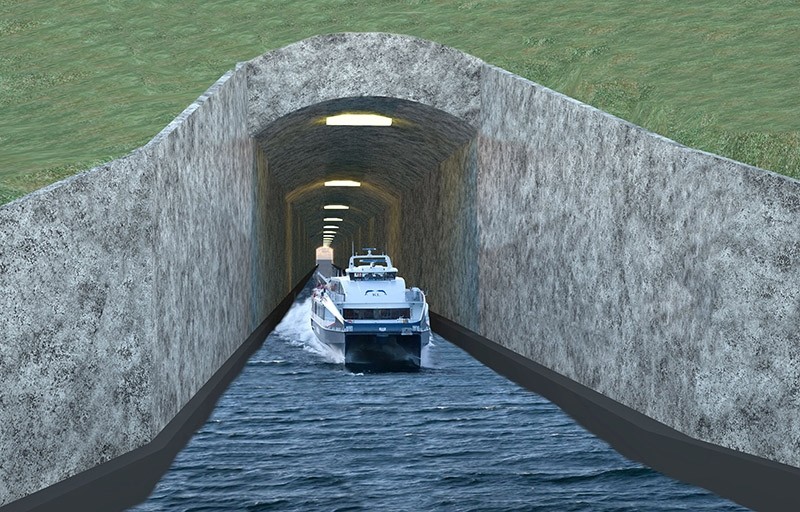 Norway plans to build a 1,700-meter (5,610-feet) tunnel for ships — a world first — through a piece of rocky coast to allow vessels avoid a treacherous part of sea.

Project manager Terje Andreassen said engineers will have to blast out an estimated eight million tons of rock to build the tunnel, which would allow cruise and freight ships weighing up to 16,000 tons.

The tunnel is expected to be located at the narrowest point of the Stadlandet peninsula and the weather has for decades been considered an obstacle for shipping.

Project manager Terje Andreassen said engineers will have to blast out an estimated eight million tons of rock to build the tunnel. Construction is expected to start at the earliest in 2019.

Under the plan, passenger traffic will be given priority but leisure boats and other vessels can also use the tunnel. It will be free of charge for vessels measuring less than 70 meters (230 feet), and vessels longer than that would have to be led.

Vessels sailing through the tunnel likely will get slot times from a traffic center — like planes at an airport — to avoid congestion.

The North Sea is roughed up by fierce winds off the peninsula and many ships wait for storms to abate before continuing their journey.

Even the Vikings, who were talented sailors, preferred to avoid the waters, instead transporting their boats by land.

Tunnels for boats exist in other parts of the world such as the Canal du Midi in France, but the Stad tunnel will be the first to accommodate ships up to 16,000 tonnes for freight transport and passengers, including the iconic Bergen-Kirkenes Coastal Express, which connects the Nordic nation's south and north.